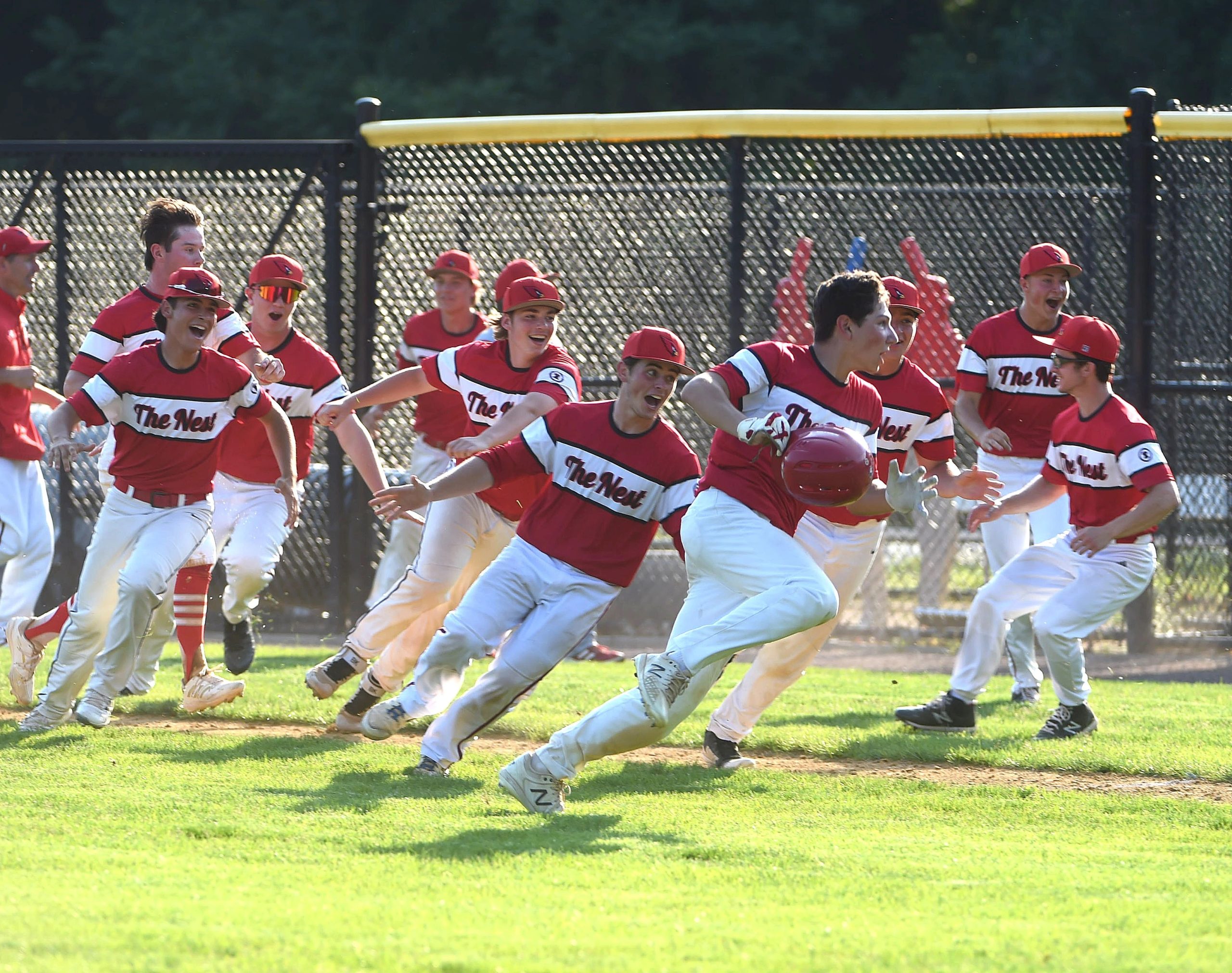 Upper Dublin players celebrate the 7th inning walk off base hit to gives the Cardinals a 3-2 victory and the District Title at Neumann University Tuesday afternoon. (PETE BANNAN - DAILY TIMES)

ASTON — Kyle Rizzo had a look of bewilderment as he strolled off the field after Upper Dublin rallied for a dramatic, 3-2, walk-off victory over Strath Haven Tuesday afternoon in the District 1 Class 5A championship game.

“I’m still trying to take in what just happened,” the senior catcher said.

He wasn’t alone. Everyone in attendance was trying to wrap their heads around what took place at Neumann University’s Bruder Field.

Upper Dublin’s Ethan Madnick knocks in the winning run in the 7th inning to gives the Cardinals a 3-2 victory and the District Title at Neumann University Tuesday afternoon. (PETE BANNAN – DAILY TIMES)

One minute, it looked like the game was headed for extra innings and the next thing you know the Cardinals (17-6) are charging out of the dugout to celebrate the first district title in program history.

“Winning it as a senior, with all my boys, was a real team effort,” Rizzo said. “I’m still in shock.”

The Cardinals capitalized on three Strath Haven errors to score a pair of unearned runs in the bottom of the seventh inning and advance to the PIAA Tournament as the top seed from District 1. Pinch-hitter Austin Dahl scampered home with the winning run on a throwing error by Strath Haven second baseman Zane Malarkey with two outs and the bases loaded.

It was a stunning conclusion to what had been an error-free game to that point.

“Zane makes that play 99 times out of 100,” Strath Haven coach Brian Fili said. “He just kind of air-mailed it a little bit, but I just told him there were a lot of things that happened that affected the ballgame more than just the last play.”

For most of the game it was a 1-1 pitcher’s duel between Upper Dublin righty Tristan Cairnes and Strath Haven lefty Alex Pak. Both pitchers overcame rough starts to keep it tied.

After giving up back-to-back singles to start the fourth inning, Cairnes struck out the next three hitters to get out of that jam.

Pak got help from his defense to keep the Cardinals at bay. Catcher Matt Kane thew out Ethan Madnick trying to steal second base in the fourth inning and left fielder Jake McDonough gunned down Leo Soriano at third base in the sixth inning.

Strath Haven finally broke through in the top of the seventh inning when pinch-hitter Mateo Malo ripped a single to left field and designated hitter Alex Verona blasted a two-out, RBI triple two batters later to dead centerfield to chase home pinch-runner Matt Caputo to give the Panthers a 2-1 lead.

“It was a fastball a little down,” Verona said. “I’ve been trying to hit fastballs all day and I just attacked it and something good came out of it. I kind of slowed down (approaching second) because I though he made the catch. Then I saw the umpire waving his arms, so I kept going.”

Upper Dublin, though, was determined to go home with the championship trophy for the first time.

Cairnes reached base on an error by Strath Haven third baseman Nick Corritore and was sacrificed to second by Aiden McCarthy.  Dahl singled to right field and Rizzo followed with an RBI single to tie the game.

“I was just thinking, ‘I’ve got to hit a line drive. I have to keep it down, get something in the gap. I don’t want to pop up,’” said Rizzo, who will play college baseball at California University of Pennsylvania. “I able to hit a line drive ground ball.”

Luke D’Ancona, who came in for Pak in the sixth inning, got Nick Lombardo to strike out for the second out,  but Soriano reached on another error by Corritore to load the bases and keep the inning going. Madnick rolled a ground ball to second but Malarkey’s throw sailed over the head of first baseman Dylan LeBahn to allow Dahl to race home with the winning run and dash Strath Haven’s hopes of winning a second straight district title.

“It’s definitely a little disappointing but it’s a little more motivation as we go into states,” Verona said.