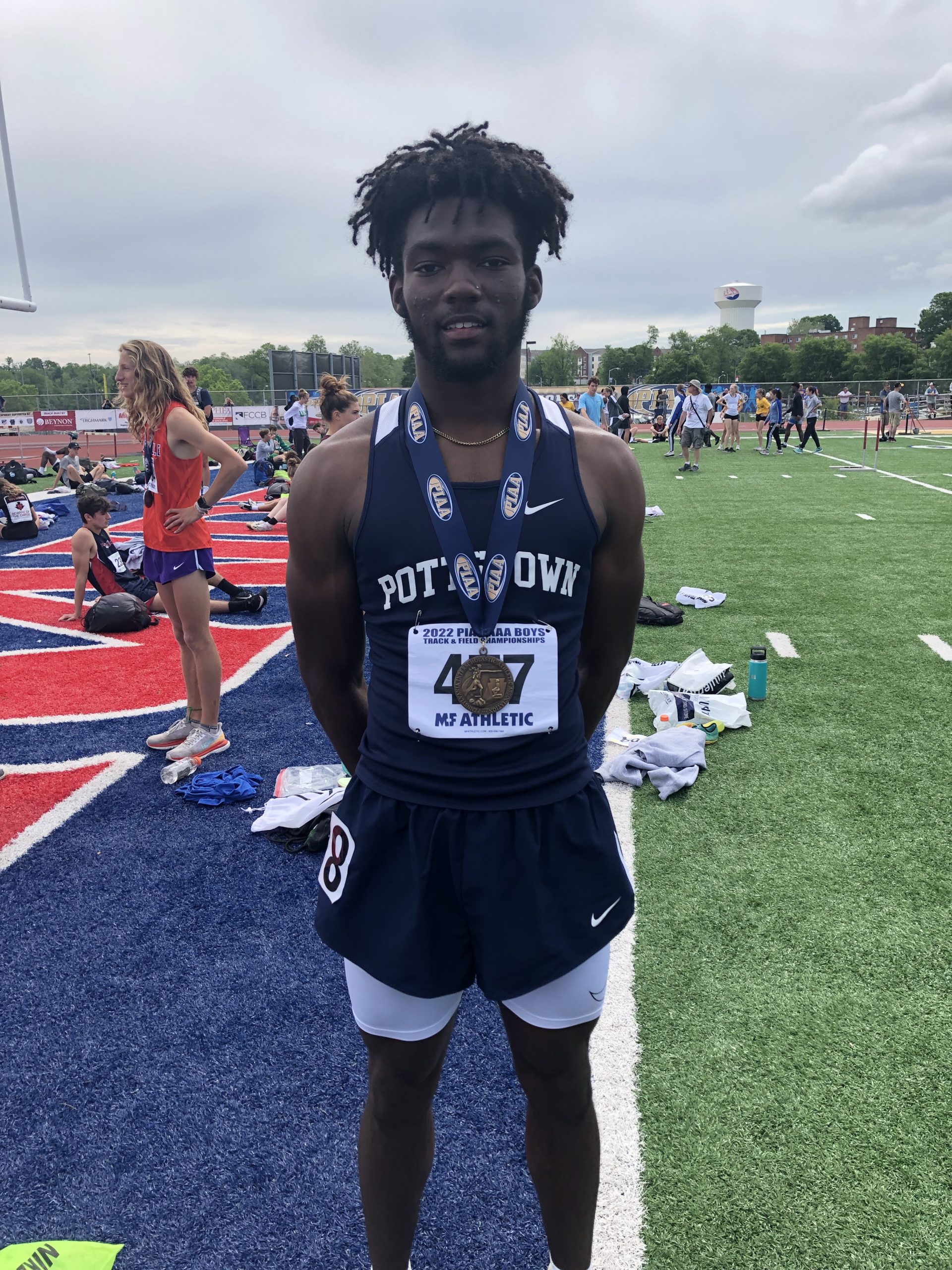 SHIPPENSBURG >> Two of the top track and field athletes from the PAC took home medals Saturday at Day 2 of the PIAA Track and Field Championships as Pottstown’s Tyrese Washington earned fourth in the 110 hurdles and Upper Perkiomen’s Thomas Flud Jr. took home seventh in the javelin.

“I was happy that I made it here in the first place,” Washington said. “My last race. I got like a 15.32 and I finally jumped back down in the 14’s so I’m just happy overall.”

Washington ran a personal best of 14.63 and the sophomore explained that working on his lead leg helped him prepare for the event heading into the championship.

“I was just practicing mostly on my lead leg,” Washington said. “Snapping it down, getting to the hurdle and repeating.”

After having an enjoyable and positive experience, Washington seemed keen to return to the state championships and make the podium again next year.

“This has been fun,” Washington said. “I just love track.”

In the field, Flud Jr. earned a seventh-place finish in his second consecutive year at the state championships and improved on his 2021 performance where he placed fifteenth.

While Flud Jr. improved on his placement from last year, the junior acknowledged that he did not reach his peak potential on his throws and that the accomplishment was bittersweet. .

“I’m disappointed; I didn’t throw my best today,” Flud Jr. explained. “A lot of these guys pulled out big throws and came ahead from where they were. So a lot of respect for my competitors.

It’s my second year, and I’m leaving with a state medal. So I can’t be too upset and I’m really just happy to end the school season on somewhat of a win.”

Flud Jr., who has been growing as a thrower since he began with the javelin two seasons ago, noted that the mental side of throwing may be equally if not more important than the physical technique.

“A lot of it is just small adjustments and technique,” Flud Jr. said. “After you learn the basic form, just centimeters is the difference between throwing 170-180. So really, it’s just doing it over and over again, and being able to learn how to block out the noise and just do what I know I can do. So it just gets to a point where it’s more of a mental game than it is actually physical.

Aside from last year when I was here. It’s the biggest stage I performed on,” Flud Jr. said. “So I wasn’t completely focused and there’s definitely some adjustments I need to make, but for the most part, I did well.”

With mental fortitude the focus, Flud Jr. is hoping to return to states next year with one goal in mind.