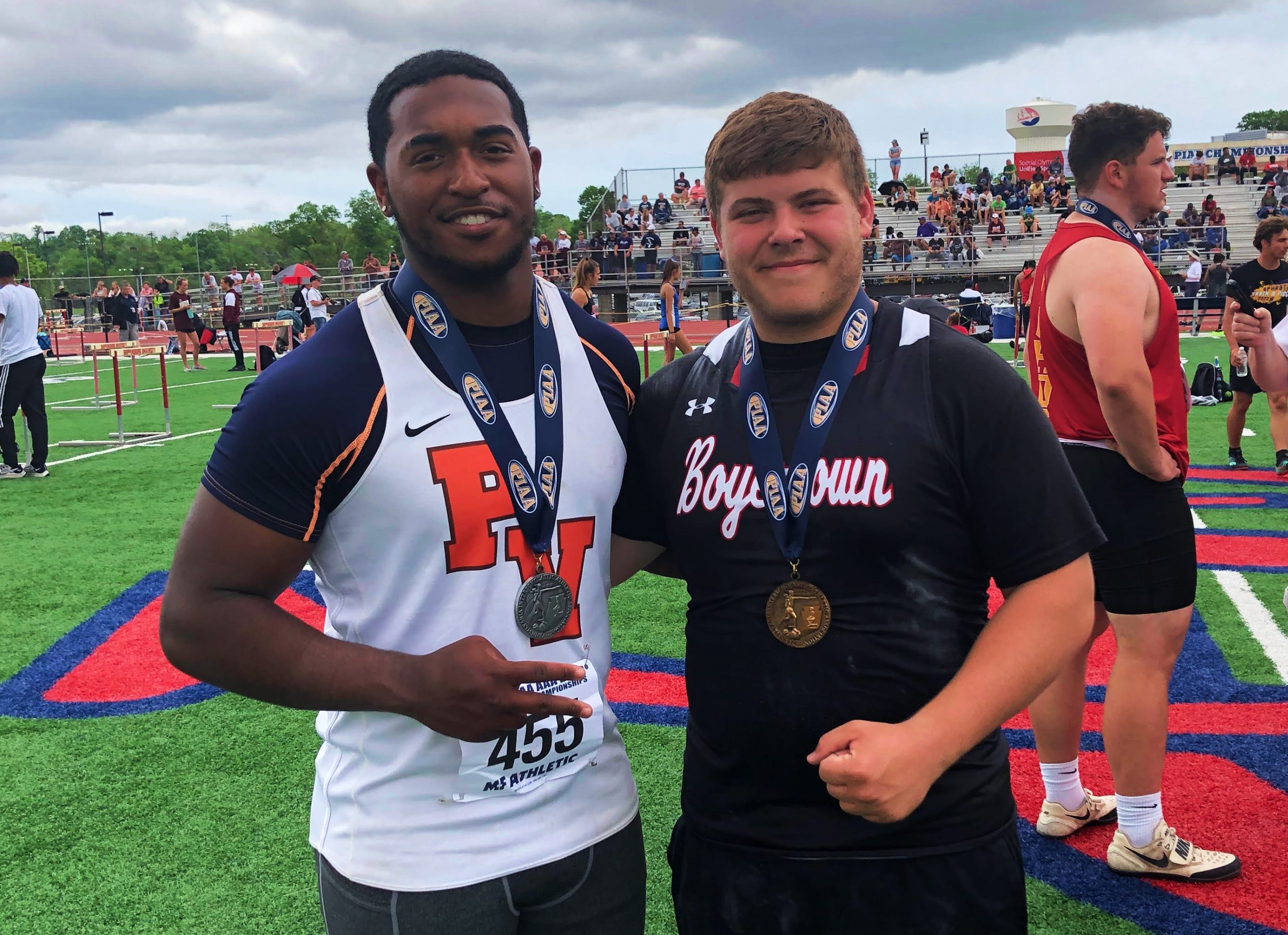 SHIPPENSBURG >> Two senior shot put standouts from the Pioneer Athletic Conference took home medals at the PIAA Track and Field Championships Friday at Shippensburg after spending the majority of their high school careers growing together as throwers.

Perkiomen Valley’s Ronde Washington followed up on his gold medal-winning performance at the District 1 Track and Field Championships by winning silver in Friday’s 3A shot put event.

Washington took home second with a throw of 57-0 and was joined on the podium by his friend and training partner, Boyertown’s Jayden Miller, who threw a 52-2.5 for seventh place.

“It just seems like all the hard work paid off being on the podium,” Washington said. “It feels great because last year I was never on the podium, so this year it’s just a surreal feeling knowing that my reality was my dream.”

Miller agreed that joining Washington on the podium after training together at Garage Strength in Fleetwood since their sophomore year made the accomplishment more special.

“It’s always good to medal together,” Miller said. “It’s always fun seeing each other. You know, we train every day so it’s nice when we’re both up there.”

While remaining proud of their medals, the two seniors acknowledged that they were unable to reach their peak potential on their throws.
Washington threw a 58-2 to win the 3A shot put in the District 1 tournament and was coming off a meet record throw of 60-6 at the PAC Championships.

“I was a little sloppy in the circle,” Washington said. “It wasn’t my best performance but I’ll put those together when I do.”

In last year’s PIAA championships, Miller was one of five non-seniors to compete in the shot put and finished 19th.

Miller, who earned a bronze medal at this year’s districts with a 55-4.5 and had a personal best of 56-1 in 2022, said it has been fun to compete at such a high level and that he looks forward to the future.

“My big one just wasn’t there,” Miller said. “But it was still a fun experience and it’s always fun to get out there and compete at this level.

“It’s been a long four years, but I’m ready to move on to the next chapter and see what’s next.”

With their goal of reaching the podium at states complete, the two seniors seemed pleased with how their careers ended up.

“It’s been exactly what I envisioned since my freshman year so I’m happy,” Washington said.

Washington qualified eighth in the 110-meter hurdles in 15.23.

Owens qualified in fourth by winning her heat after running a 45.52 in the 300-meter hurdles. Her time was seventh among finalists.

The Spring-Ford boys’ 4×100 relay of Leonell Aguilar, Mason Scott, Chris Brittingham and Travell Wellons qualified third by winning the first heat to advance to Saturday’s final. Their 43.03 was the eighth-fastest time among finalists.

Brown out >> Norristown sprint star Jaden Brown, the reigning PIAA champion in the 100 meters, was unable to defend his title after last weekend’s District 1-record setting run at Coatesville.

Brown, after running a 10.52 for the district record, pulled up clutching his hamstring after last week’s race.

Other competitors >> Spring-Ford senior Kaleigh Hudson placed 20th in prelims of the girls’ 3A 100 meters in 12.72 and did not qualify for the finals.
Hudson joined Jordan Littlejohn, Elizabeth Nguyen and Claire Lanzisera on the Rams’ 4×100 relay that finished 13th (49.49) in prelims.