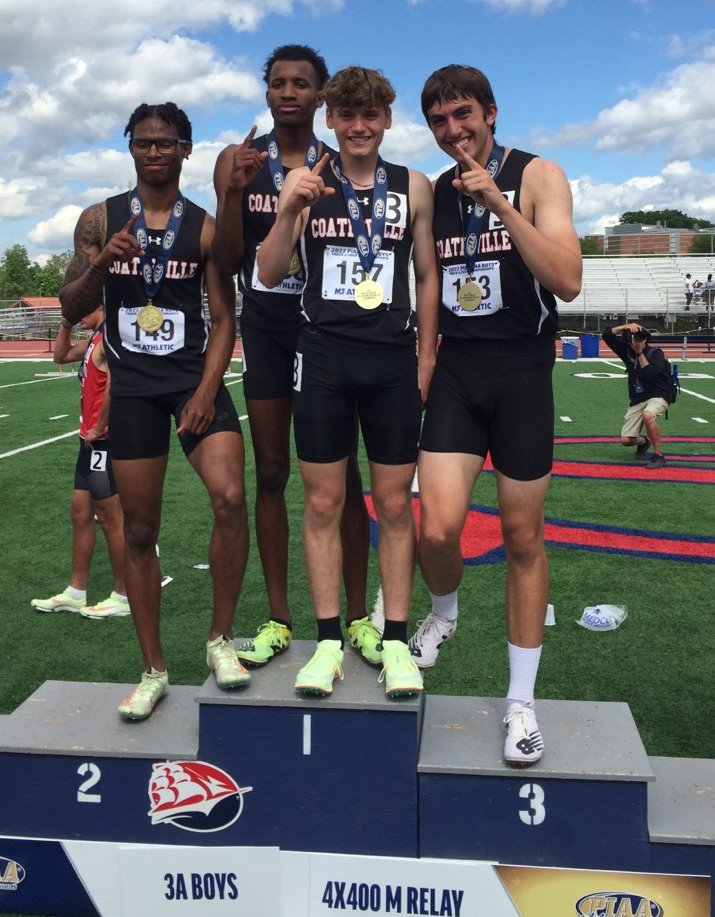 In the final event of the PIAA 3A Track & Field Championships Saturday at Shippensburg University, Coatesville saw its dream come true.
Coatesville finished first in the boys 4×400 relay, with a quartet of senior Dave Kelly, sophomore Jabarri Stocker, sophomore Tommy Silvester and senior Lebron Bessick clocking 3:16.13, defeating runnerup Central Bucks West (3:16.38) with a great final burst by Bessick.
“Our goal this weekend was to win the gold medal at States in the boys 4×400,” said Coatesville boys track coach Damien Henry. “When Lebron took the baton, he was about 15 meters back and ran a split of 45.85 to win the race. Lebron’s anchor leg was amazing and we are so proud his hard work paid off this weekend.”
“And it was special to win that race because we got to see Dave Kelly, who gave us four years of commitment, walk off with a first-place medal. Jabarri and Tommy really stepped up and ran well, too.”
Earlier on Saturday, Bessick finished first in the 400-meters, clocking 46.91, a time ranked first in Pennsylvania, is among the top 25 times in the USA, and earned NFHS honor roll status. The runner-up, Cumberland Valley’s Luke Noss stopped the clock in 47.73.
“Lebron is committed to the 400, and he executed it to perfection for the entire weekend,” said Henry.
West Chester Rustin, which finished in fifth place in the AAA girls team standings, had a couple of strong finishes in Saturday’s relays, including a gold medal in the 4×800.
The Rustin 4×800 quartet of Hannah Betchyk, Brianna Ambrosine, Lindsey Volkman and Maddie Miller finished first with a time of 9:27.13, ahead of second-place Pennridge (9:27.44).
The Golden Knights placed third in the girls 4×400 relay, Amelia Foore, Miller, Keturah Darwon and Ava Alexander, clocked 3:52.36. Alexander finished fifth in the 400 (56.42).
Miller finished eighth in the 800 (2:15.23) for Rustin, and on the boys side, senior Dayshawn Jacobs was seventh in the high jump (6-2).
Downingtown West finished second in the 4×100 relay, with a quartet of Kelly Bell, Elijah Ford, Jacob Dixon and Deonsae Dorsey clocking 41.84, just behind first-place finisher Wilson (41.49). On the girls side, D-West junior Carolyn Tarpley finished sixth in the 3200 with a time of 10:39.54, a top 10 clocking in Pennsylvania.
Unionville senior Alex Pancoast finished fifth in the discus Saturday with a throw of 125-4, one of the top 10 marks in Pennsylvania. On Friday, she finished sixth in the shot put (39-3).
“This was a great weekend for Alex,” said Unionville coach Mark Lacianca. “She wanted to hit a big throw both days, and it says a lot that she was fifth in the state today, had four throws over 120 feet and we never saw her best throw. We’re really proud of Alex, two state medals and a great career.”
Great Valley finished fifth in the girls 4×100 relay, with a quartet of Rachel Hubley, Stephanie Cristinzio, Gillian Yonce and Briella Gorman clocking 49.44. West Chester Henderson’s Preston Lubeski finished fifth in the 400-meters (48.19, among the top 10 times in Pennsylvania), while West Chester East senior Chinonye Moneme finished sixth in the girls 100 (12.31).
Here’s a look at the remaining performances by Chester County schools at the PIAA 3A state championships Saturday:
Avon Grove finished sixth in the girls 4×400, with a quartet of Paige Clark, Eden Veenema, Leia Conlan and Payton Smith, clocking 3:58.13, while Connor Bossong, Gavin McGinn, Connor Britton and Nathan Allen finished 15th in the boys 4×800 relay (8:09.79).
“Both of our relays gave it everything they had today,” said Avon Grove coach Eric Broadbent. “Our girls 4×4 was very consistent and peaked when it counted. They are a fantastic group and we will hopefully be back next year as we have a young and talented group.
“Our boys 4×4 relay qualified for districts in a last chance JV meet running solo and made it to states. They were exciting to watch leading up to states.”
Oxford sophomore Macaela Walker finished seventh in the girls 100-meter hurdles (15.44). Senior Zander Quinn finished ninth in the long jump (21-5).
Great Valley’s quartet of Jake Zielinski, Pete Schembri, Patrick Hanlon and Cooper Schrader finished ninth in the 4×800 relay (7:59.69). Junior Charlotte Powell finished 20th in the discus (101-2).
Kennett freshman Xavier McGreal was ninth in the high jump (6-2), and senior Jesse Comanda finished 22nd in the 800 (1:57.47, a top 50 time in Pa.)
Downingtown East’s quartet of Nick Steinfeldt, Brendan Flynn, Will Nakahara and Caiden Leen finished 10th in the boys 4×800 relay (8:00.99). Flynn finished 17th in the 3200 (9:32.00) and Leen placed 20th in the 800 (1:56.90) – both clockings are top 50 times in Pennsylvania.
Coatesville senior Rhyel Miles-Eubanks finished 10th in the boys javelin (169-5), and Red Raider senior Lorelei Eberly finished 16th in the girls long jump (16-8).
Villa Maria Academy junior Marin Rosser finished 11th in the girls javelin with a throw of 121-1.
Conestoga senior Kristen Lavallee finished 11th in the girls high jump (5-2).
West Chester Rustin junior Ellie Keefer finished 12th in the girls 3200 meter run (10:52.63), and her time is among the top 25 clockings in Pennsylvania. In the girls discus, Golden Knight seniors Chloe Mattie (15th place, throw of 110-11) and Julie Blazey (17th, 105-10) both finished in the top 20.
West Chester East senior Matthew Bergin was 12th in the boys’ high jump (6-0).
In Class AA, Devon Prep senior Keaton Rush finished 21st in the boys 3200-meter run (9:58.27).