Shearer pitches one-hitter, strikes out 12 as North Penn shuts out Hatboro-Horsham in District 1-6A quarterfinals 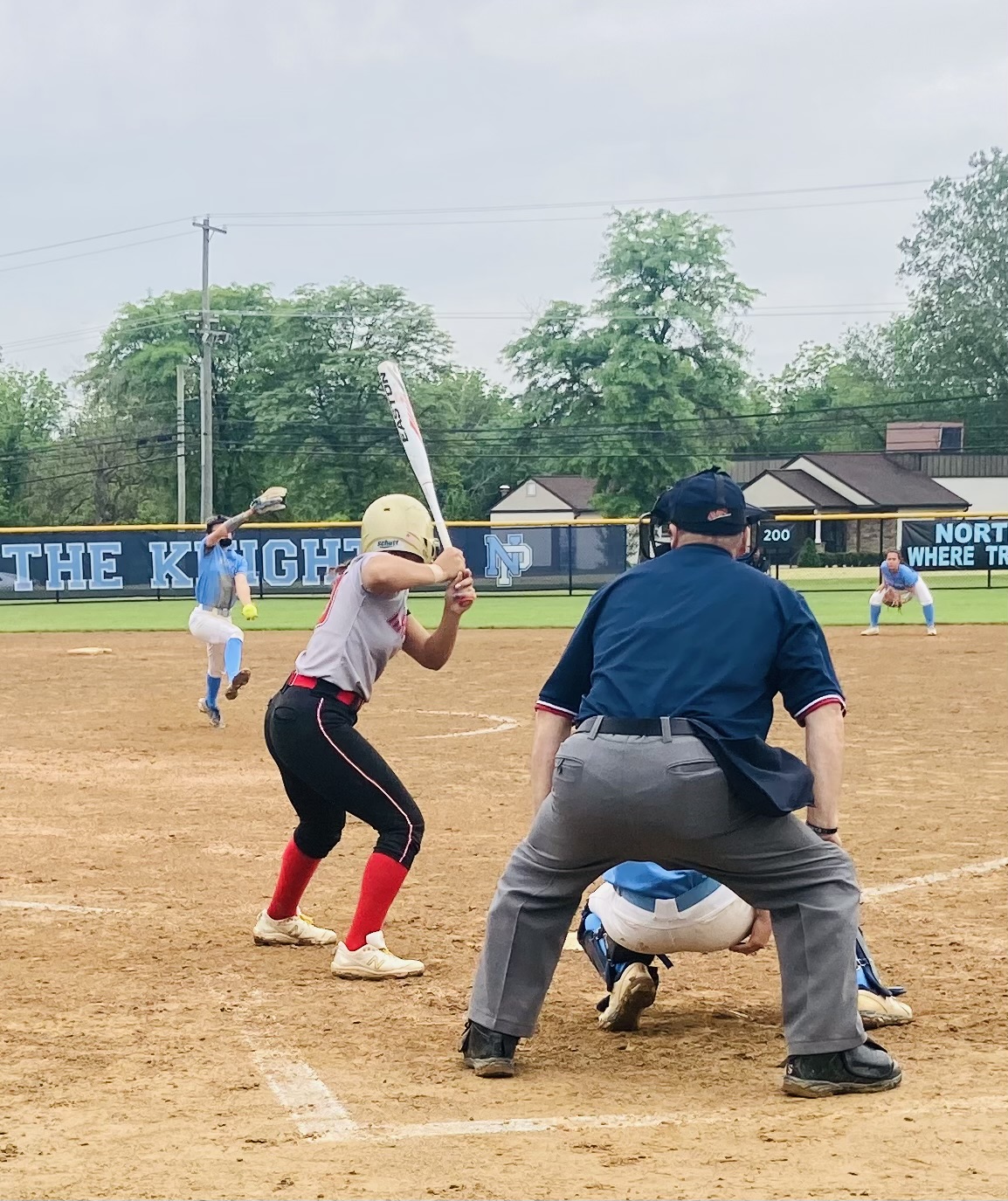 North Penn's Julia Shearer pitches to Hatboro-Horsham's Amya Lundy in the fifth inning of their game on Friday, May 27, 2022. Kev Hunter, MediaNews.

TOWAMENCIN >> Julia Shearer was perfect into the sixth and the North Penn offense produced more than enough in the later innings, as the Knights outlasted the rain and rival Hatboro-Horsham for a 4-0 victory Friday.

With the win, third-seeded North Penn advances to the District 1-6A Semifinals against either Spring-Ford or Quakertown on Tuesday, and the defending PIAA-6A Champs also locked down a spot in states.

After a one-hour rain delay, North Penn went right to work, especially Shearer, who struck out the side to start the game.

“They’re a really good team,” she said of the No. 6 Hatters, “and I really wanted to come out and win this one.”

North Penn’s Julia Shearer had 12 strikeouts in a shutout of Hatboro-Horsham on Friday, May 27, 2022. Kev Hunter, MediaNews.

The lefty retired the first 15 batters she faced, not allowing a hit until Maddie Karpovich legged out an infield single in the sixth. That was the only hit Shearer would allow, and she struck out 12 and walked just one in pointing the way to states and the district’s final four.

“As soon as we heard we were gonna play, we instantly got back into focus,” Shearer said of the delay. “And we were ready.

“When my stuff was working, it boosted my confidence so much,” she said. “So as the game went on, I was just so excited to get back out there and pitch. Pitching well against a good team like that is a confidence booster.”

Shearer also used her bat and legs to provide a spark.

With one out in the fifth, she drew a walk against Hatter ace Kendal Leitner and then stole second to immediately race into scoring position.

“She runs like a deer,” Knights coach Rick Torresani said. She just come out and does everything.”

Sarah Sabocsik drew a walk and the Knights had runners on first and second.

“It was really just adrenaline. On the at-bat before, I had gotten a piece of it, but it wasn’t hit hard enough to get it past them,” Wilmot said. “I saw how far back the outfielders were so I figured if I could hit it like I did the last Hatboro-Horsham game (in district playbacks last spring), just get it over someone’s head and score some runs, it would get my teammates going.”

Wilmot lofted a double to the left side, scoring Shearer for a 1-0 North Penn lead.

“Hatboro’s a good team. We just had to do what we do, and it took a little while, but we finally got the clutch hit,” Torresani said. “(Brie is) so strong she just pushed it over the shortstop.

“This was a huge team effort. The kids played good defense, didn’t make any errors or anything like that, and when I asked them to do something, 90 percent of the time it was done tonight. And that’s huge.”

The Knights added to their lead in the sixth.

North Penn’s Sophia Collins singled and scored a run in the win over Hatboro-Horsham on Friday, May 27, 2022. Kev Hunter, MediaNews.

Sophia Collins got it all started, leading the inning off with a single down the third-base line.

“We knew we had to get something going. It was getting late, and we didn’t want another game like (Wednesday in a win over Avon Grove), waiting until the last inning,” she said. “We were trying everything we could to get runs before the seventh inning.”

RBI hits by Reyna Doherty and Annabelle Smink followed, and Wilmot was hit by a pitch with the bases loaded, her second RBI of the contest making it 4-0 Knights.

She had four strikeouts in the final two innings, and threw out Abby Waeltz to end it.

“Julia threw a really special game,” Hatters coach Kelly Krier said. “This is our first time seeing her, and she definitely lived up to all of the reports that I’ve gotten.

“Our defense stepped up, Kendal stepped up, and we were able to hold a really talented offensive team for most of the game. You have to give their batters a ton of credit. They were really disciplined at bat today and forced Kendal to throw pitches a little bit more over the plate than normal. They’re a strong hitting team and they were able to get the hits that they needed.”

Hatboro-Horsham’s Kendal Leitner pitches to North Penn’s Sarah Sabocsik in the third inning of their game on Friday, May 27, 2022. Kev Hunter, MediaNews.

The Hatters still have life, and will enter district playbacks trying to grab one of the final two states spots (six advance out of 6A).

“That’s what we said (after the game). This may not be the path that we wanted when the day started but we live to play another day,” Krier said.