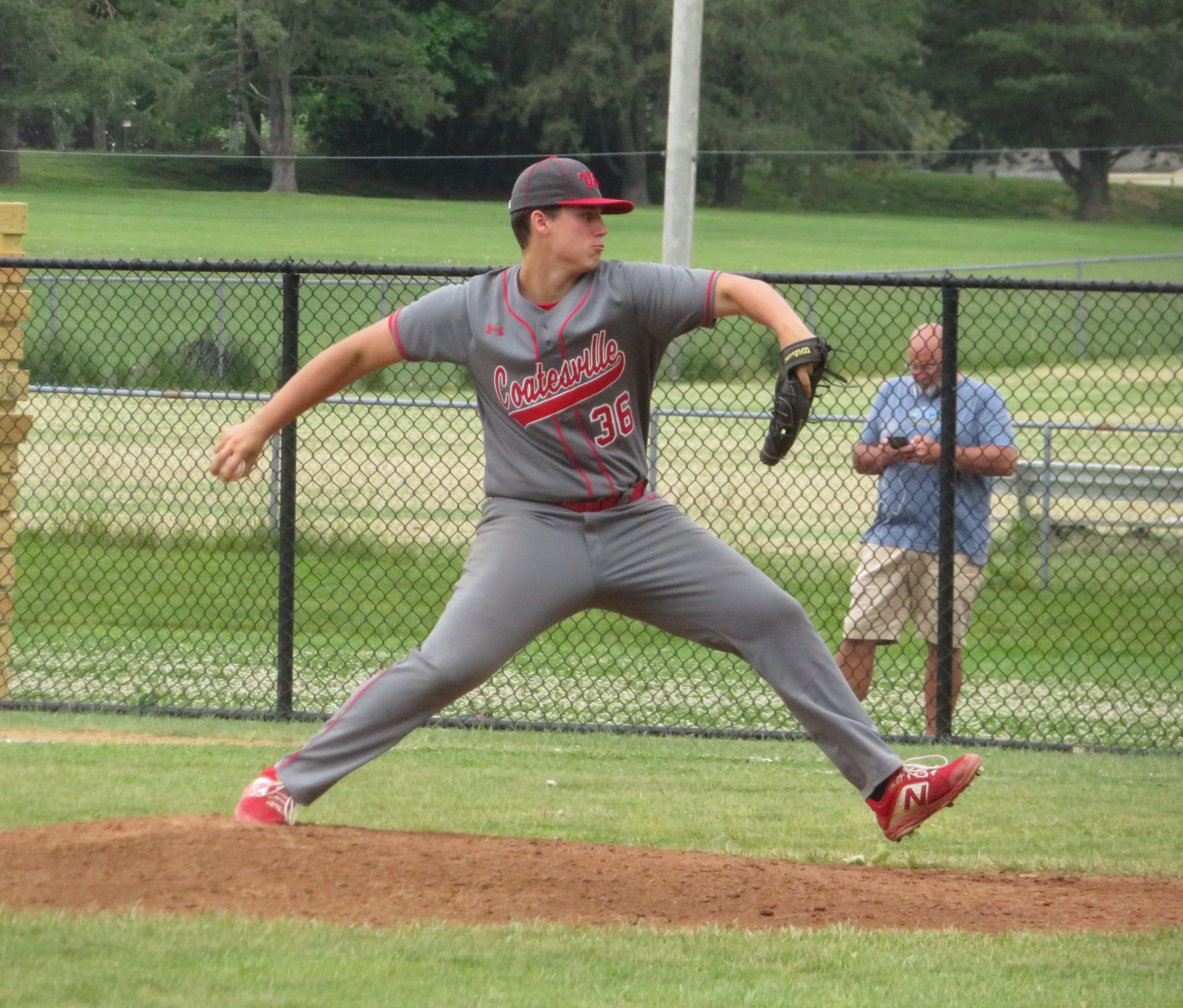 HORSHAM >> Harrison Susi got a second life during his third-inning at-bat and made the most of it.

The Coatesville junior’s bunt attempt went into the air and straight back. The ball hit the backstop fence just before Hatboro-Horsham catcher Zach Greenberg could make a play on it. A few pitches later, Susi sent a two-strike pitch over the left-field fence for a three-run home run.

Susi’s blast was the highlight of a five-run third inning and a spark in Coatesville’s 9-2 win at Hatboro-Horsham Senior High School to send the Red Raiders to the District 1-6A semifinals and secure a spot in the state playoffs.

“Last year we all got bummed out losing to Neshaminy in the first round,” Susi said. “We all want to go far this year and make a run.”

No. 7 Coatesville entered the top of the third inning trailing 1-0. Alex Keuhn’s RBI single tied the game and Josh Howe grounded into a fielder’s choice to score a run and put his side ahead. Two batters later, Susi put the ball over the fence for a 5-1 lead.

“It was a fastball outside,” Susi remembered. “I hit it off the end of the bat. I don’t know, I’ve been struggling to hit this year. I was actually just trying to mess with the third baseman trying to do a little slap, but got a hold of it and got it over.”

“It pumped me up,” Coatesville junior pitcher Ben Jones said of the five-run third inning. “I was screaming with them. I was pretty pumped.”

Howe hit a sacrifice fly in the fourth inning to make it a 6-1 game before the Red Raiders put the game away in the fifth. After Jacob Stewart’s RBI single made it 7-1, Magnus Krieger added two more. The designated hitter put one in a similar spot as Susi, over the left-field fence, for a 9-1 lead.

That was plenty of run support for Jones. The right-hander struck out four batters to four walks in a complete game two-hitter. He allowed two runs, both unearned.

Jones surrendered a run to the first batter he faced and didn’t let another runner reach third base until the seventh inning. Trey Porter walked to start the game, advanced to second on a wild pitch and scored when Jack Elwell’s bunt single was thrown into the outfield.

Porter singled with two outs in the top of the third inning and Jones didn’t allow a hit the rest of the way.

“I think I got my nerves out of the way,” Jones, who had success with his slider and fastball, said. “The first couple of innings I was kind of nervous and then I just got into the zone.”

Logan Fischer grounded out to score Ryan Toporowski, who reached on an error, to make it 9-2 in the bottom of the seventh.

“It was disappointing to perform like that,” Hatters coach Pete Moore said. “It wasn’t a lack of effort. It wasn’t a lack of preparation. We had a really good practice (Thursday), the guys were excited for today. I don’t think it was the mindset, I just think we didn’t perform.”

Stephen Plefka took the loss for the second-seeded Hatters. He allowed five runs on seven hits in three innings. He struck out four batters to two walks.

Porter came on in relief and allowed four runs in 1 1/3 innings. Toporowski finished the game with 2 2/3 shutout innings.

Coatesville will face No. 3 Owen J. Roberts in the semifinals Tuesday.

Hatboro-Horsham will have a chance to earn District 1’s final spot in the PIAA-6A state playoff. The Hatters will host No. 6 Garnet Valley Tuesday. The winner will advance to the fifth-place game Thursday.