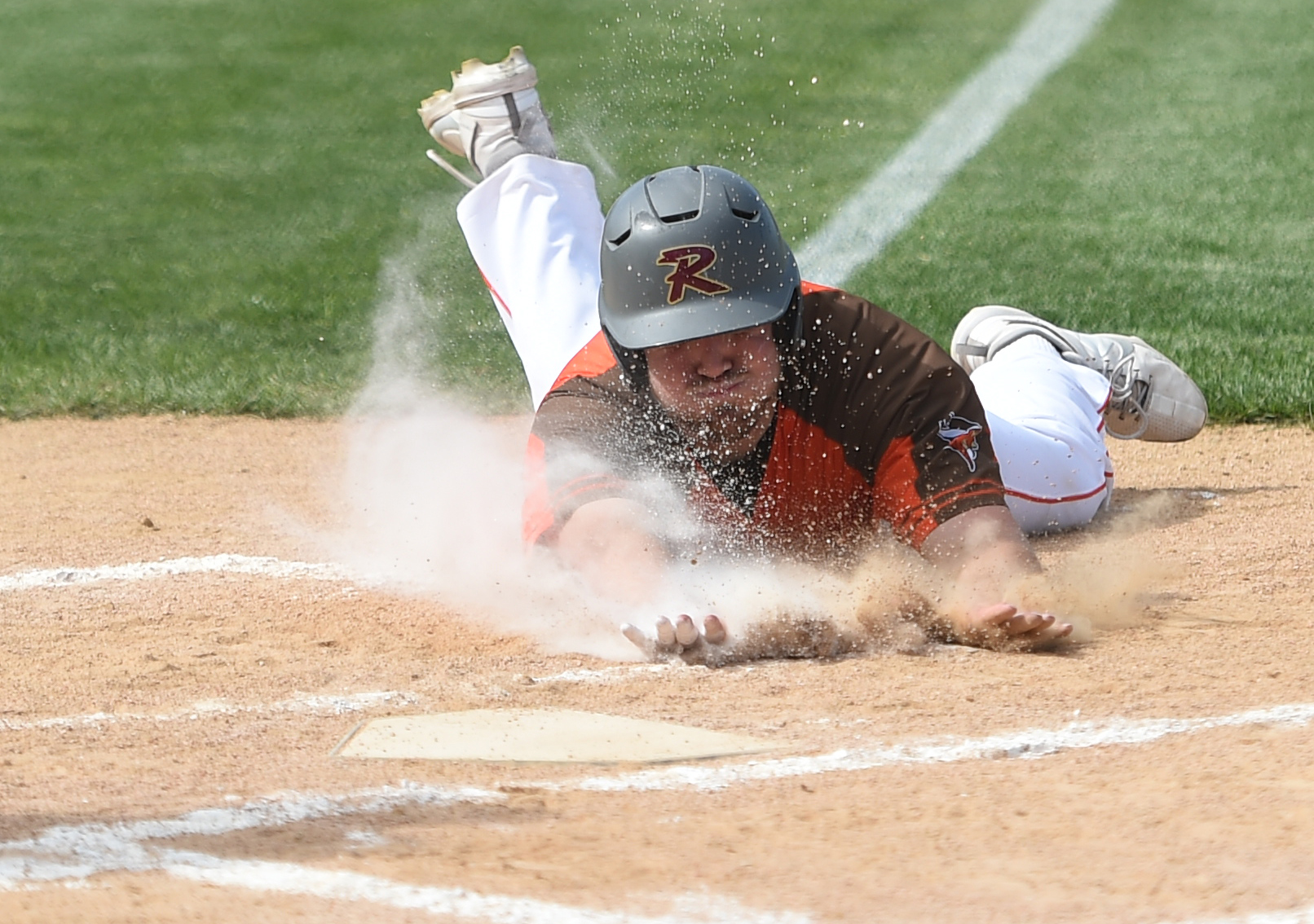 Perkiomen Valley’s Zach Fusco slides in safely to home plate on an RBI double by Tyler Boccelli during the first inning of Wednesday’s District 1-6A playoff game at Spring-Ford. (Owen McCue - MediaNews Group)

ROYERSFORD >> It was the start of a new season for the Perkiomen Valley baseball team on Wednesday afternoon.

A chance to form a new identity.

The Vikings lost twice to league rival Spring-Ford during the regular season, but a different Perk Valley squad showed up for Wednesday’s district playoff opener against the Rams.

No. 9 Perkiomen Valley struck for eight runs in the first three innings on the way to a 13-3 win over No. 8 Spring-Ford in Wednesday’s District 1-6A second round game.

PV will travel to top-seeded West Chester Henderson on Friday for the district quarters.

“We were pretty confident coming in,” PV junior outfielder Michael Poruban said. “We knew we could beat them, even after the first two losses. So we just stayed up the whole time and played well.”

.@PerkValleyBASE’s Michael Poruban and Tyler Boccelli were two of the offensive catalysts and Jack Colyer had a strong start in a District 1 win Wednesday. pic.twitter.com/axUKUIYzoq

Poruban set the tone with a lead-off single. After two straight outs, the Vikings reeled off three straight hits. Zach Fusco drove in Poruban before Tyler Boccelli’s double knocked in Fusco and Kevin Fitzpatrick to put PV (16-5) up 3-0 in the first.

Andrew McGowan drove in a pair of runs in the second. Luke Ott, Justin Stasyk and Chris Gorla all drove in runs in the third to put PV up 8-0 on Spring-Ford (14-8).

“I just think it was the amount of hitting we did in practice yesterday,” Poruban said. “We spent pretty much the last half of it all off the machine, and that helped us get ready for today.”

Perkiomen Valley starter Jack Colyer gave up just one hit through the first three innings to help PV take control. He picked up the win, allowing three runs on seven hits and five walks and striking out two in 4.2 innings..

“That was huge,” Colyer said of the big lead. “It gave me so much more confidence on the mound.”

“I was working from the first inning really well. Gorla behind the plate was helping me out a little, and it was just a great day.”

Momentum teetered toward the Rams’ in the fourth and fifth innings. Aydan McNelly and Nick Moyer both came around to score after lead-off singles in the fourth to make it 8-2.

Spring-Ford got its first two runners on in the fifth and McNelly tattooed another ball. But this time it was right at PV second baseman JT Brady, who snagged it and tagged second for a double play.

Brian Korchok (2 RBI) singled in Jake Books to make it 8-3, but McGowan came in for Colyer and ensured the damage didn’t go further than that.

“I thought we had a chance to get back in the game,” Books said. “Colyer was getting high on the pitch count. It just didn’t go our way today.”

McGowan followed Colyer with 2.1 innings of hitless relief, walking one and striking out two.

“We just know that we have a very deep lineup,” Boccelli said. “Whoever’s next up can hit. When it’s your time to shine, just prove you can hit and it happens.”

The Vikings combined for just five runs in two games against the Rams in the regular season, and the offensive outburst was a far cry from the two-hit performance the Vikings put up in the a PAC semifinal loss to Owen J. Roberts.

“In practices, we just all came together as a team and hit, hit, hit,” Boccelli said. “Our close bonds helped us and in practice we just executed our hits and it improved us in game.”

The three combined for 36 wins in two varsity seasons, helping the Rams to a PAC championship and state semifinal last season.

The Rams started this season 3-3 in the PAC before winning 10 of 11 to reach the league championship game.

Spring-Ford’s Aydan McNelly throws to first for an out during Wednesday’s District 1-6A playoff game against Perkiomen Valley. (Owen McCue – MediaNews Group)

Perkiomen Valley can earn a spot in states with a win over top-seeded West Chester Henderson on Friday.

The Warriors have just one loss this season, but the Vikings will bring into the game red-hot bats and have available two of their top three arms (McGowan and Ashton Mehler).

PV hasn’t been to the district semifinals since 2017.

“Just playing loose, playing confident,” Colyer said of the keys to the game. “We know what we gotta to do and just have some fun.”

NOTES >> Nick Moyer and Grant Klemann both had two hits for Spring-Ford.

Perkiomen Valley reliever Andrew McGowan, right, gets a hug from starter Jack Colyer after the final out of Wednesday’s District 1-6A playoff game at Spring-Ford. (Owen McCue – MediaNews Group)

Perkiomen Valley’s Michael Poruban comes in to score one of his four runs during Wednesday’s District 1-6A playoff game at Spring-Ford. (Owen McCue – MediaNews Group)