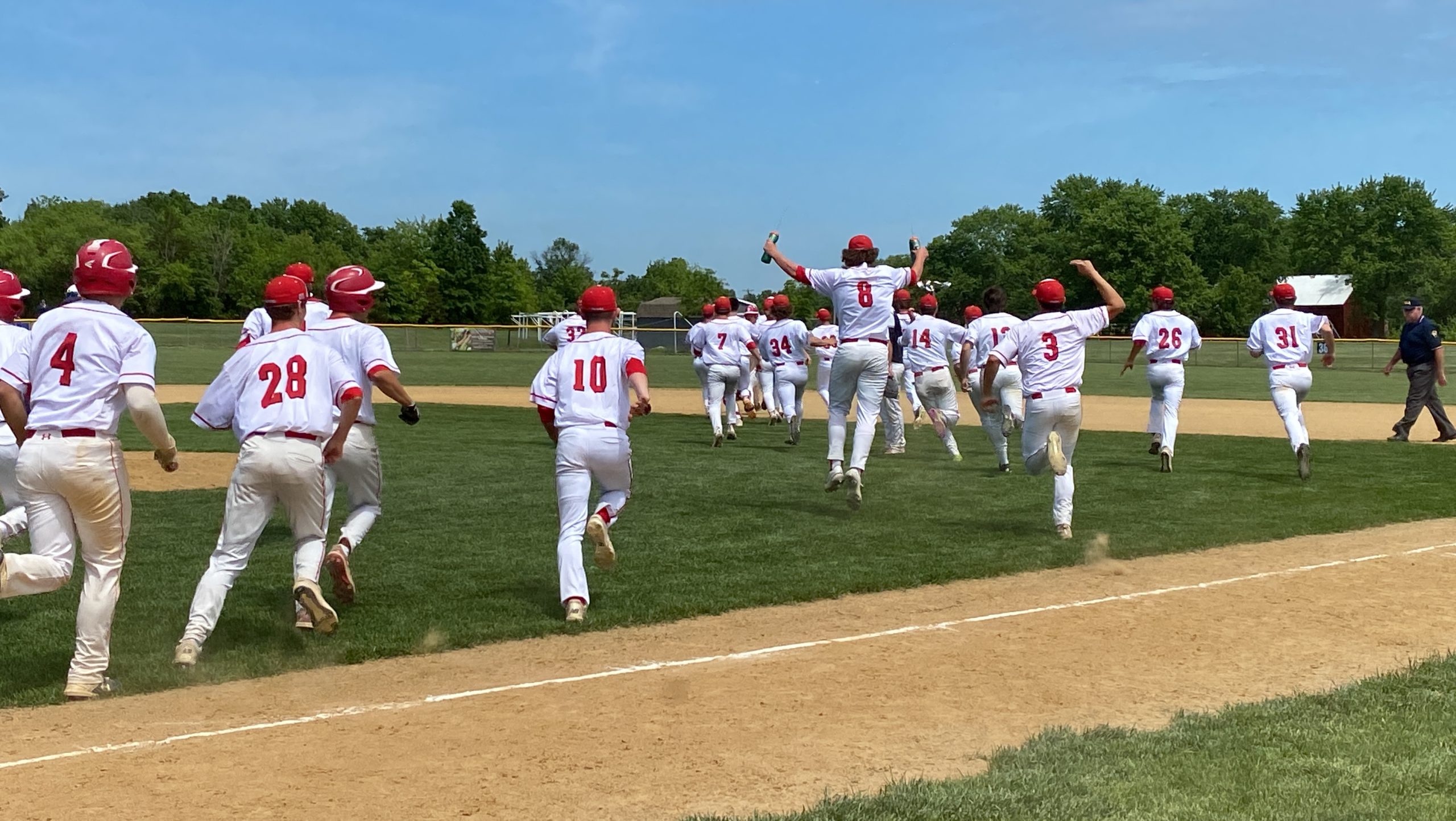 The Souderton's baseball team storms the field in celebration after Chris McKenna's walk-off single in the eighth inning gave the Indians' a 1-0 victory over Council Rock North in the District 1-6A second round on Wednesday, May 25, 2022. (Mike Cabrey/MediaNews Group)

LOWER SALFORD >> Chris McKenna said he was “looking for a perfect pitch.”

He did not have to wait too long to get one.

With the bases loaded in a scoreless game in the bottom of the eighth inning, Souderton baseball’s sophomore second baseman took the first offering he was given and belted it into left field to unleash a jubilant Big Red celebration.

“I knew it was over when I hit it,” McKenna said. “Especially cause even if he caught it we could of got the tag up at third.”

In a contest in which both team got stellar performances from their starting pitchers, McKenna’s walk-off RBI single advanced the Indians out of the District 1-6A second round as No. 4 Souderton survived No. 20 Council Rock North’s upset bid to earn a 1-0 victory Wednesday afternoon at Vic Alderfer Memorial Ball Park.

“This is playoff baseball – low-scoring game, pitchers are great, throwing strikes, getting outs,” Souderton coach Mike Childs said. “And then the execution of great plays. The shortstop goes up the one play Carter (Jagiela) hits a great ball, we throw a guy [out] at home plate. This is playoff baseball, that’s what’s great.

“Unfortunately somebody’s got to go home, I mean after a game like this both teams play hard and I’m happy it’s us not this time.”

Souderton (18-3) extended its win streak to 13 games in reaching the district quarterfinals for the first time since 2019. Big Red hosts No. 5 Pennsbury – which defeated No. 12 Quakertown 8-2 – noon Friday with the winner clinching a PIAA tournament berth.

“I really love playing with this team,” said McKenna, who finished 2-for-4 at the plate. “It’s one of my favorite teams to play with and I really didn’t want it to end today. I think we’ll make a run now after we got through that first game. I think that was going to be our biggest problem.”

While neither pitcher ended up factoring in the decision, Souderton right-hander Will McCausland and Rock North’s Jadon Tong engaged in a high-quality pitchers’ duel over seven innings with a few great defensive plays from both sides maintaining the 0-0 stalemate.

McCausland went 7 1/3 innings before hitting the 105-pitch limit, the Saint Joseph’s commit collected 14 strikeouts – striking out the side in both the fifth and seventh – while allowing four hits and a walk.

“I was really starting to feel my curveball and my fastball was playing off of it really well, staying up in the zone after that,” McCausland said.

“This is his first year pitching for us,” Council Rock North coach Matt Schram said. “So if his command was on he always gave us a chance, he always kept us in the game.”

Jack Harar hit McCausland’s final pitch into center field for a one-out single in the top of the eighth but Jackson Morrissette came in and got consecutive fly outs.

“I trust J-Mo, the kid that came in, he’s first-team all-league no doubt in my mind he can close it out,” said McCausland of Morrissette. “We’re a hitting team – it was going to happen eventually.”

Andrew Schatz led off the bottom of the eighth with a walk. Schatz broke for second as Kaden Pasternak offered a bunt, stealing second with an errant throw to second allowing Schatz to take third.

Pasternak got on base after a dropped third strike – North not throwing down to first – to put runners on the corners. An intentional walk to Shanley Wall loaded the bases for McKenna, who finally broke the tie by sending the first pitch he saw into left to bring in Schatz.

“He’s a minor fireplug on the team,” said Childs of McKenna. “He doesn’t say much, always smiling. And the situation there, I said ‘you know the next sign that was coming,’ he goes ‘Yeah that’s why I swung at the first pitch.’ And he barrels one up to the fence. He’s just overall a smart kid who plays tough and we’ll take that kid any time in those situations.”

Morrissette’s two-thirds of an inning on the mound earned him the win while Nick Focella, who took over for Tang in the eighth, took the loss for CR North.

The defeat denies Council Rock North its first district quarterfinal appearance since 2018 and ends its season at 12-9.

North left its last visit to Harleysville Community Center on April 18 with an 8-4 victory over Souderton to stand 6-1 in games that counted in the District 1 rankings. But North won just two of its next nine, the 8-8 mark enough to make the postseason as 6A’s 20th and last seed. North knocked off No. 13 Springfield-Delco 4-1 Monday in the first round.

CR North came close to taking the lead in the top of the sixth. With two outs, Tang singled to end McCausland’s run of consecutive batters retired at 13. Tang’s courtesy runner Dominic Wagner went to second on a wild pitch. Wagner tried to score after an error on Josh Huddy’s grounder to first but the throw from right fielder Hunter Weitzel got to catcher Jagiela for a tag as Wagner slid into home – the call was out and the contest remained 0-0.

“You knew it was going to be a close play at the plate,” Schram said. “I’m thinking if he throws it on the fly he’s dead out but if he bounces it, we got a chance. And he bounces it but their catcher makes a phenomenal play and good teams, good players make good plays.”

Another great defensive play kept things tied in the bottom of the sixth. McKenna collected a one-out bunt single while on the next at-bat Luke Pollock reached on an error. Jagiela followed by lacing a line drive to the left side but North shortstop Austin Stalker jumped up to snag the ball then threw to second for the inning-ending double play.

In the bottom of fifth, Schatz reached on a two-out error then advanced to third after an errant pick-off throw. Tang, however, got out of the jam by getting the next batter to ground out back to him.

“His fastball, it jumped on you, it was pretty quick,” said McKenna of Tang. “His curveball was pretty good, he was getting us with that a lot. Got us out with two pitches, which is pretty impressive.”

Brian Curry hit a one-out single in the top of the second but McCausland did not allow another baserunner until Tang’s base hit with two outs in the sixth.

After getting the out at home to end the sixth, McCausland – who in the April 18 game against CR North went four innings and took the loss – struck out the next four before giving up a one-out single to Harar in the eighth.

“Feel like I was really starting to spin my curveball later in the game and that was really helping me stay in it,” McCausland said.

District 1-6A Second Round

Upper Dublin advances to District 1-5A semifinals with win over Bishop Shanahan
District 1-3A: Upper Dublin rallies back from 2-0 hole to beat Council Rock North and advance to states