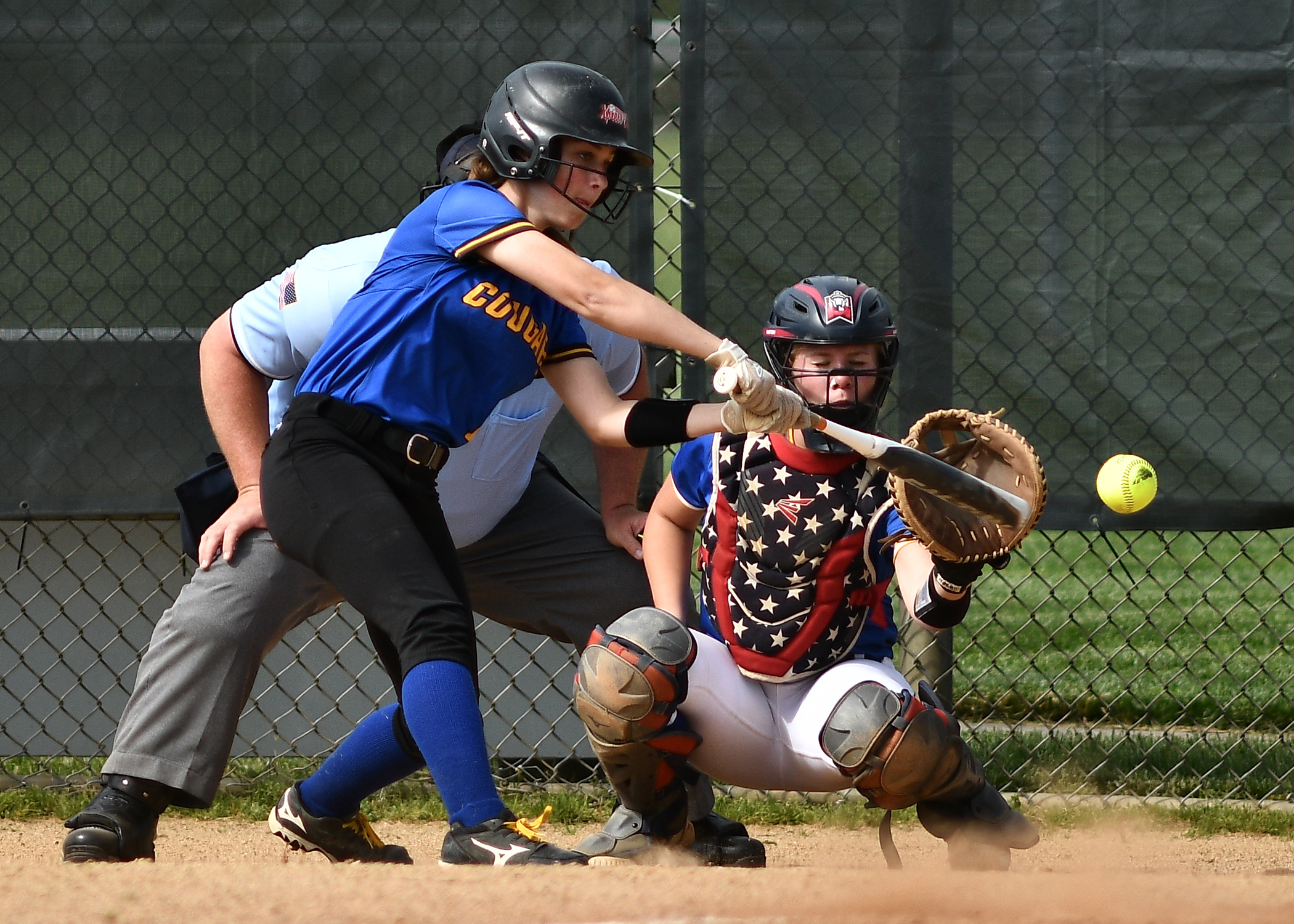 East's Sophia Kucera drives a ball down the line for an RBI single. (BILL RUDICK for MediaNews Group)

DOWNINGTOWN >> Given that Dowiningtown East and Downingtown West split their regular season match-ups, you can’t really call the No. 12-seeded Cougars’ 4-2 win in the second round of the District 1 6A softball playoffs over the number 5 Whippets an upset.
But, any time the crosstown rivals meet, it’s going to be a battle, fraught with emotion. And with Wednesday’s win, the Cougars (17-5) advance to Friday’s quarterfinal round, while the Whippets’ (18-3) season comes to a close.
Up next for Downingtown East is a trip to Haverford to play the No. 4 Fords, a 1-0 winner in eight innings over Boyertown on Wednesday.

“We are so excited,” said Cougars coach Peggy O’Dwyer. “We wanted this win so bad. We really put it all together today. We got the timely hits when we needed them. We played solid defense, and Rachael (Schumann) pitched a great game. And Nicki Sudall called a great game at catcher.”
Schumann helped herself in the first inning. With two outs and runners on first and second, Schumann connected on an outside pitch, and ripped a double to the gap in right-center field to knock in Sudall and Lilly Waterer, Schumann wound up on third on the throw home.
“When I’m hitting, I really just try to flush out all the thoughts and relax,” said Schumann. “I knew I had to just relax and get things done for my team.”
West answered back in the second, pushing across two runs of their own. Lizzie Kern (2-4, 2B, R) got things going with a one-out double. Darby Weller followed with a single to put runners on the corners. Morgan DeFreitas capitalized on the opportunity with a double to knock in both runners.

But after that, Schumann settled in and kept the Whippets off the board for the rest of the way. Schumann picked up the complete-game victory, allowing two runs on nine hits, striking out five, without walking a batter.

“Rachael was really hitting her spots and getting good heat today,” said O’Dwyer. “She does not ever get rattled. She’s always relaxed and under control. Everyone has confidence in her.”

East added the only other runs they’d need in the fourth. Ashley Ponto (2-3, R) reached on a one-out single to spark the inning. Nicole Mattei followed with a base on balls, and both runners moved up on a groundout form Julian Thornton. Sophia Kucera and Sudall (2-4, R, RBI) came through with back-to-back base hits to bring home both Ponto and Mattei, giving the Cougars a 4-2 lead.

“I was mostly just thinking about getting the bat on the ball, because you never know what can happen if you just put the ball in play,” said Sudall. “We had really great energy on the bench, and we were able to get it in our head to make something happen.”Getting a district win is special enough. Having it come over a rival like West makes it even sweeter.
“Before that second game of the regular season, we hadn’t ever beaten West going back to my freshman year,” said Sudall. “So this means a lot. But we’re not done yet. We’ve got to keep it going.”
West made one final push in the bottom half of the seventh when, with two outs, Meghan Sinkus and Kern each singled and stole second, putting runners on second and third. But Schumann induced a game-ending ground out, to guarantee her team will at least be playing for a slot in the state tournament, and keep their district title hopes alive.
“Our hitting got cold at the end of the season,” said West coach Joey Germani. “We didn’t hit today like we can, and we didn’t play as well as we can. We dealt with some injuries, and had some girls playing out of position, but give East credit, and I wish them luck moving on.”
Germani will say goodbye to a great crop of seniors.
“Morgan DeFreitas was business-like, just showed up and got it done every game,” said Germani. “Meghan Sinkus got her 99th (career) hit today, and might be the best outfielder I’ve had here. Ava Zettlemoyer had a fantastic season and was at times unhittable. Juliana Diodato and Morgan Barry both had big hits and big games for us this year. Nicole Lioumis was a power hitter for us and caught every game the last two years until tearing her UCL. This is one of the best groups of seniors I’ve had. Right up there with the (district champion) class of 2019.”