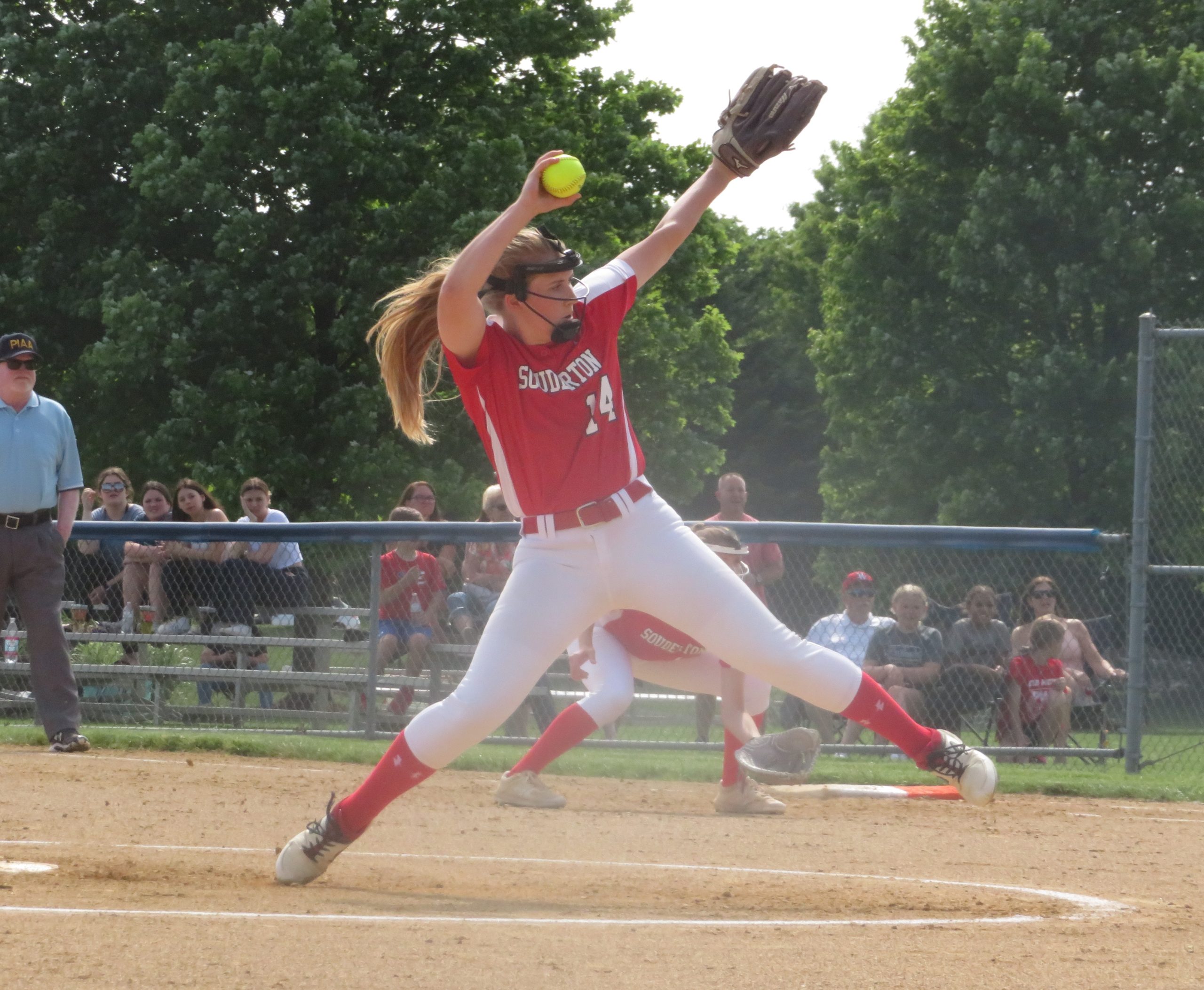 WHITEMARSH >> For the second straight season, Souderton and Plymouth Whitemarsh met in the first round of the District 1-6A playoffs.

The games were 364 days apart and the result was almost exactly the same.

Burns struck out 12 batters to no walks and scattered three hits. She retired 17 straight batters from the second inning until two outs in the seventh.

“Everything seemed to be working pretty well,” Burns, who struck out 14 batters to no walks and three hits in the 2-1 win over PW last year, said. “We figured it out as we went. My catcher (Brook Scotti) calls a great game for me. She definitely helps me out with everything. I trust her to do her thing and I just do what she tells me most of the time.

“I think I got more comfortable out on the mound. My warmup was a little shaky today, but I pulled it together.”

Burns allowed a one-out single to Lauryn Kane in the bottom of the first, but recorded back-to-back strikeouts to get out of the inning.

In the second, she allowed a leadoff single to Kalina Childers. Marissa Perez followed with a sinking line drive to center field. Souderton’s Megan Kummery couldn’t get there to make the catch, but forced the lead runner out at second for the first of 17 consecutive outs.

Burns allowed a two-out single to Childers in the bottom of the seventh, but got a pop up to second base to end the game and send the Indians to a second-round matchup with No. 2 Spring-Ford Wednesday.

Souderton’s Abby Burns warms up in the middle of the first inning of a game against Plymouth Whitemarsh Monday. (Ed Morlock – MediaNews Group)

Souderton scored its runs in the fourth and fifth innings and both times Riley York got the offense going. She was 2-for-4 with two doubles and two runs scored.

York led off the top of the fourth inning with a double – the fist hit allowed by PW’s Molly Moore. She advanced to third on Kendell Clemmer’s single into shallow left field and scored on Taylor Nelson’s bunt.

“I really try to just go for it when I’m running,” York said. “Try to be aggressive, have no regrets out there, really just go for it.

“I didn’t really know she was bunting, so I just went for it, spur of the moment.”

In the fifth, York ripped a two-out double to left field before scoring on a Clemmer single. Clemmer’s base hit was nearly identical to the one she had in the fourth inning, but with two outs York didn’t need to wait to see if the ball was caught.

“Their outfield was playing pretty far back,” York said. “Kendell always tends to put the ball in play. I knew it was going to fall in.”

“We knew Abby was going to do what Abby does pitching,” PW coach Mike Perez said. “We knew the York sisters were going to come in and mash the ball and that’s exactly what happened, that’s what got us. We just didn’t adjust fast enough to Abby on the mound.”

Moore was the hard-luck loser in this pitcher’s duel. She threw a complete game with eight strikeouts to one walk. She allowed two runs on seven hits.

“I thought Molly did a great job, even with a couple big hits,” Perez said. “They loaded the bases a couple times. I thought we did a good job working out of that with minimal damage. We just couldn’t come back and get the hits that we needed.”

The right-hander stepped up in big moments in the fourth and fifth innings to limit Souderton to two total runs.

The Indians loaded the bases with no outs after York scored in the fourth. Moore forced a grounder to shortstop, where Marissa Perez threw out the runner at home, for the first out. Moore struck out the next batter before another grounder to Perez ended the threat.

In the fifth, Souderton had runners on first and second with two outs after York scored and Moore ended the inning with a strikeout.

Moore also left the bases loaded in the seventh when two batters reached on errors.

While the loss ends PW’s season, the Colonials have plenty to look forward to. They went 14-7 this season with two freshman, five sophomores and only one senior – Kane – in the starting lineup.

“I’ve been watching (Kane) play softball since she was a little kid,” Mike Perez said. “Lucky enough to have her for the past three years here. It’s been amazing. She’s been a great leader for our team, she’s been a great coach on the field. It’s not easy being the only senior on an extremely young team… but she was wonderful. She was all I could ask for and more.”