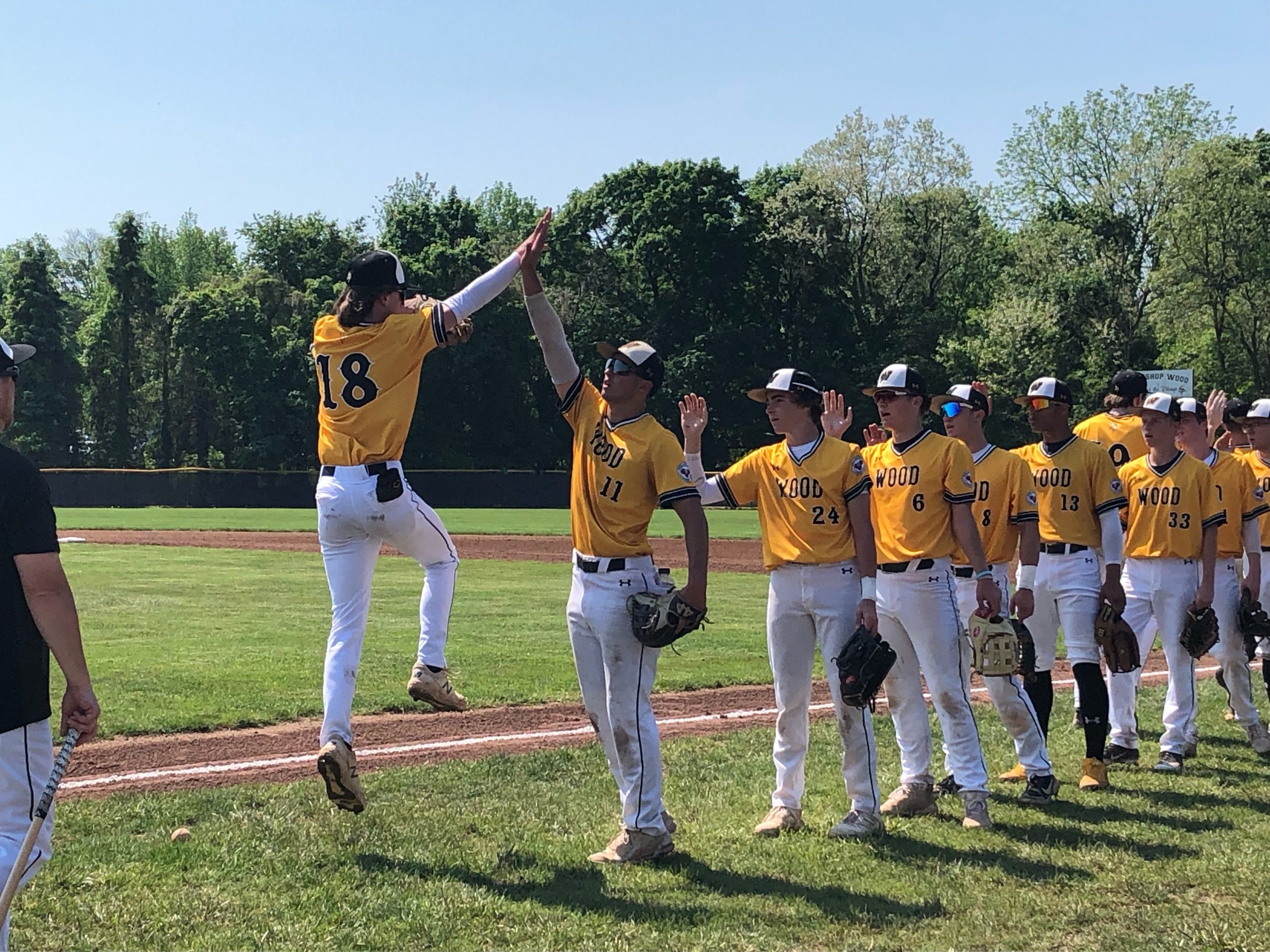 WARMINSTER >> Patrick McKinney knew it was gone as soon as it left his bat.

Archbishop Wood’s junior catcher provided the explosion at the end of the fuse with his go-ahead, three-run home run in the bottom of the fifth inning Saturday, a single swing that turned everything around for the host Vikings. The No. 2 seed in the PCL playoffs had been struggling against No. 7 seed St. Joe’s Prep, but some self-starting energy in the fifth provided all the drive Wood needed to finish things off.

The Vikings’ fifth-inning rally led to a strong finish and a 4-2 win over the Hawks as Wood advanced to next week’s Catholic League semifinals.

“I felt like I had barreled it and I don’t know, I felt I had gotten used to his pitching,” McKinney said. “We faced a really good pitcher, but I was locked in and I knew I had come up big for my team.

“We always find a way to pick each other and get loud, that’s what really started the whole thing.”

The pitching duel between Prep right-hander Ryan Mullock and Wood’s righty Michael Trommer was a good one, even as both hurlers logged a lot of time under a gruelingly hot Sun on a day where temperatures were already touching 90 at the 11 a.m. start.

Wood struck first, pushing a run across in the bottom of the first inning when a fly ball to right by Aiden Myers that would have been a sac fly anyway was dropped in the outfield, allowing runner Sean Carroll to score. That lead didn’t even last a half-inning as Prep’s Dan Piccariello led off the second with a long flare single to center field, setting up first baseman Cole Nilles to launch a two-run blast to left-center that gave the Hawks a 2-1 advantage.

“What I was most proud of was that our kids, especially after getting behind early there, they kept playing,” Vikings coach Jim DiGuiseppe Jr said. “We talk about that there are going to be highs and lows, so just keep playing basketball. They did a great job today.”

A fantastic play by Prep right fielder Joe McGinnis in the bottom of the second turned a routine fly ball into a double play when he threw a rocket to third to double-off a runner trying to tag up from second base, halting a potential Wood rally and keeping the Hawks in front. It seemed like that might be enough for Mullock, a Lehigh recruit who retired the Vikings in order in the third and fourth innings.

In the fifth, everything turned starting with Braden Kelly’s at-bat to lead off the frame. Kelly, the lone sophomore in Wood’s starting lineup, battled into a full count and dug in for the payoff pitch as Vikings outfielder Joey Gale leaned out of the dugout with some pointed words of encouragement.

Gale, a junior who made an impressive catch in center to help close out the seventh inning, is no stranger to coming up big late in a PCL playoff game. Last season as a sophomore, it was his walk-off grand slam that got Wood through the quarterfinals but all he wanted Kelly to do was get on base.

“I got that from one of our seniors last year, Luke Cantwell, just a great energy guy and he really knew how to get us hyped up and you really need to know how to get that turned on,” Gale said. “Braden has the best eye on our team, he knows the zone better than anyone I’ve ever known and he’s only a sophomore. I just told him (Mullock) was going thrown him a strike, he’d been throwing strikes all game so I told him just to get his barrel out there and it would go.”

Kelly singled and Brian Klumpp put down a textbook sac bunt that moved the tying run into scoring position and flipping the lineup over for Gale in the leadoff spot. In their first two battles, Mullock had gotten the best of Gale and the Wood junior was again in a tight spot down 0-2 as he looked for a little redemption.

That redemption came in the form of a single out to center and a timely hold of Kelly by DiGuiseppe Jr at third base, keeping men at the corners with one out.

“0-2 is all mental, you have to mentally tell yourself ‘this guy will not beat me, he will not beat me,’ and that’s exactly what I did,” Gale said. “He got me twice, that guy was a great pitcher, he struck me out but you have to learn from your at-bats. I didn’t get frustrated with myself, got a barrel on it and it went.”

The Wood coach, sensing his team had something going, didn’t want to send Kelly at that point with the Prep defense having gotten to the ball fast and McKinney coming to the dish.

Certainly, the Vikings did. McKinney quickly got down the line to first as the ball left the yard, giving a flex as he rounded to second base as DiGuiseppe Jr celebrated in the third base box. The catcher made his way around the rest of the bases, sharing an emphatic high-five with his coach at third and making it count with a hard stomp of home plate as Gale and the rest of the Vikings came out to greet him.

“That ball still hasn’t landed yet,” Gale said with a big grin.

Archbishop Wood’s Patrick McKinney stomps on home plate as Joey Gale and the rest of the Vikings celebrate taking the lead against St. Joe’s Prep in the PCL quarterfinals.

“Knowing you came up big for your teammates, it’s such a great feeling,” McKinney said.

There was still a game to win however and Trommer was up for it. The senior pitcher gave up a leadoff single in the top of the sixth but escaped without harm on a fielder’s choice followed by his defense spinning a 4-6-3 double play to quiet the Hawks.

Trommer struck out six but it was his ability to command the zone that made the right-hander so effective on Saturday. He didn’t engage in many long protracted duels with Prep hitters and only walked two batters while spotting his fastball to limit the Hawks to just four hits.

After giving up the home run in the second, Trommer was lights-out. He retired the side 1-2-3 in the third and fourth innings, kept the Prep quiet in the fifth and sixth then locked up the win with another 1-2-3 inning in the seventh.

“I’ve caught him a bunch, so we’re used to each other at this point,” McKinney said. “The biggest thing was just to keep throwing strikes.”

Wood will return to the field in the semifinals on May 25.