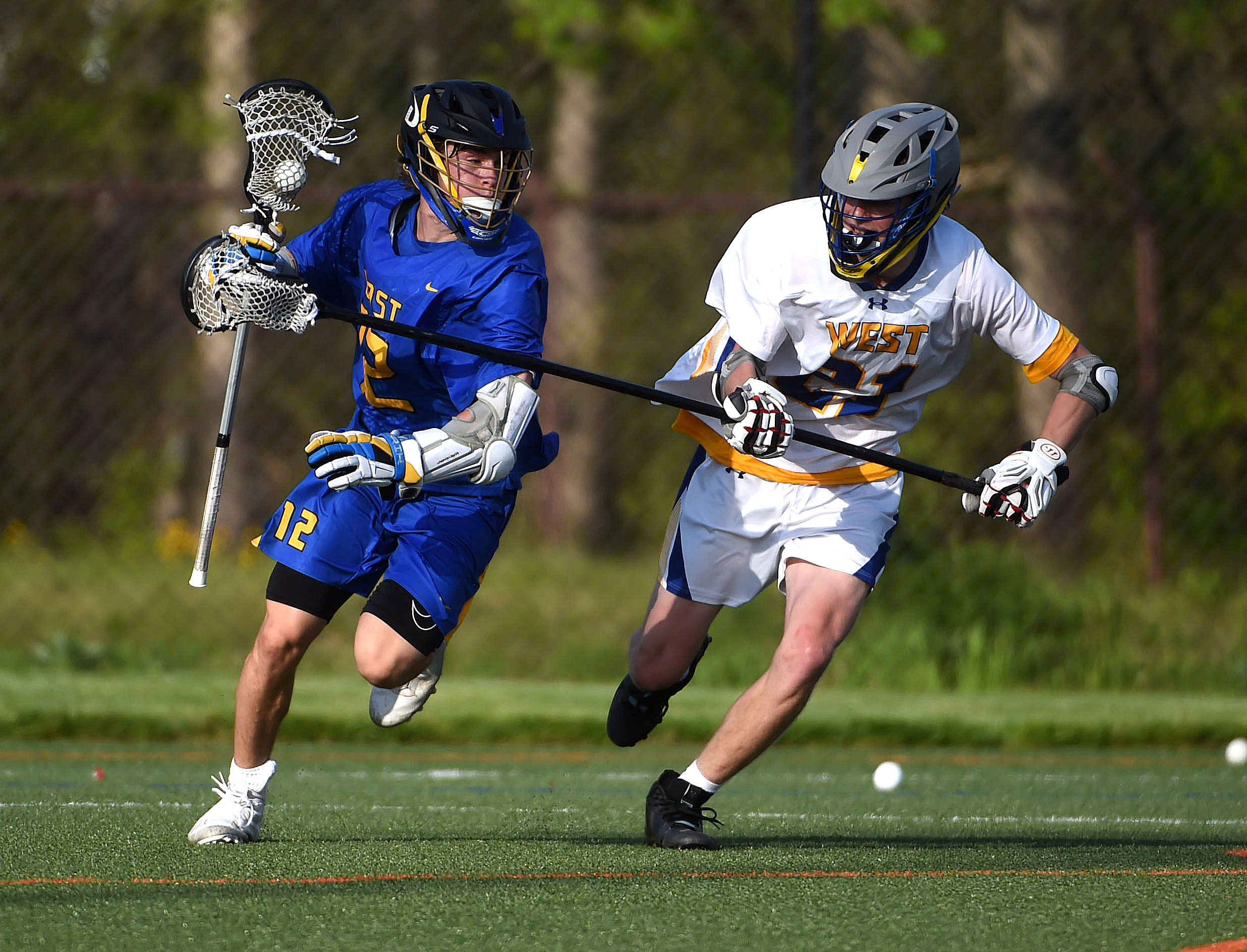 UWCHLAN – The outcome wasn’t a total shocker, but the final score …
In a result that is sure to send reverberations throughout District 1, Downingtown East scored the final 10 goals Saturday morning to overwhelm Pioneer Athletic Conference champion Spring-Ford 15-4 and advance to the Class 3A semifinals.
“We just played loose and played our game,” explained sophomore attacker Luke Fiorillo. “But I was a little surprised we scored 15 goals.”
The second-seeded Cougars improve to 18-2 overall and avenged one of its losses in the process. Played on the same field, visiting Spring-Ford nipped East 9-7 in an early April meeting.
“We were looking for revenge,” acknowledged junior defender Sam Barton.
“We played with a chip on our shoulder because (Spring-Ford) beat us the last time we played them,” Fiorillo added.
Just two wins from a district crown, the Cougars will face a surprising yet familiar foe in Tuesday’s semifinal: Ches-Mont rival Unionville. The 19th seeded Longhorns knocked off No. 6 Garnet Valley by a goal on Saturday. East edged Unionville 6-3 in the regular season finale.
The seventh-seeded Rams, who played very well in the first half, fall to 13-5 overall and into the playback bracket. They will travel to Garnet Valley on Tuesday in a do-or-die outing.
“I’m sure revenge was on (East’s) mind,” said Spring-Ford head coach Kevin Donnelly.
“But this is an accomplished bunch of guys, so we’ll regroup. We still have lacrosse to play and I expect that we will learn from this and move forward.”
Clinging to a one-goal lead late in the first half, the Cougars made it 6-4 at halftime on a sophomore-to-sophomore connection between Connor Sweeney and Fiorillo. And then in the second half, East proceeded to dissect the Rams with a precise attack, swarming defense and a bunch of faceoff wins from backup Jack Basilii. He was filling in for injured starter N.J. Cogliati.
“We’ve been like that all season,” said East head coach Joe Horvath. “We are not a deep team collectively. But we preach all the time the ‘next guys up’ philosophy, and they’ve bought into that. The guys who show up next are really doing their jobs, and we are very pleased with that.”
Another prime example is Fiorillo. He got the nod in place of suspended senior Dylan McMahon, and finished with a game-high five goals.
“Luke is a great example of the ‘next guy up’ philosophy,” Horvath pointed out. “He was asked to do the job and he did a phenomenal job today. He has a great handle – he can snag the ball out of the air – and he has a great nose for the goal.”
Junior midfielder Bo Horvath registered most of his goals in the second half, and they all came in transition. Junior Bryson Kolinsky chipped in two of his four goals during the onslaught, and also delivered the assist on a goal by sophomore Jake McMahon.
In all, the Cougars scored nine unanswered goals in the final 24 minutes of action, and they did it on their final nine shots on goal. Clearly, things snowballed on the Rams.
“It was kind of a situation where things started to go wrong and then it just started to pile up,” Donnelly said. “If something could go wrong, it did.
“Everything started going (East’s) way and we didn’t have any answers.”
Defensively, East went more than 30 minutes without surrendering a goal. Freshman keeper Brady Quinn stopped all five shots he faced in the second half as part of the squad’s unique two-man rotation in goal with sophomore Evan Milon.
“Evan started for us all of last season, and now Brady came in as a freshman and he is a very good player,” Barton explained. “It’s really interesting that it works. They both bring their own juice because they only play a half, so they want to go as hard as they can.”
The Cougars never trailed, but Spring-Ford got two first half goals from senior Christian Marchini, and a goal and an assist apiece from senior William Bonawitz and junior Justin Wixted. Marchini’s tally with 6:06 to go in the second quarter quickly followed Wixted’s goal, and seemed to give the Rams a momentum boost. But it was short-lived.
“I believe we can score when we need to,” Horvath said. “Ten consecutively is a real nice bonus. We are confident in our offense when we possess the ball and make smart decisions, and I think we did a lot of that in the second half.”
East has now won 13 of its last 14, dating back to a setback to top-seeded Radnor. Horvath chipped in four goals and an assist, and Kolinsky finished with three assists.
A junior, Basilii prevailed on 7 of 11 face offs in the second half, and helped the Cougars to a 13-10 edge overall.
“NJ (Cogliati) went out early, but Jake Basilii came in and really stepped up,” Barton said. “Keeping possession on such a hot day is a big deal. We just preached possession ball, broke (Spring-Ford’s) zone and wore them down.”