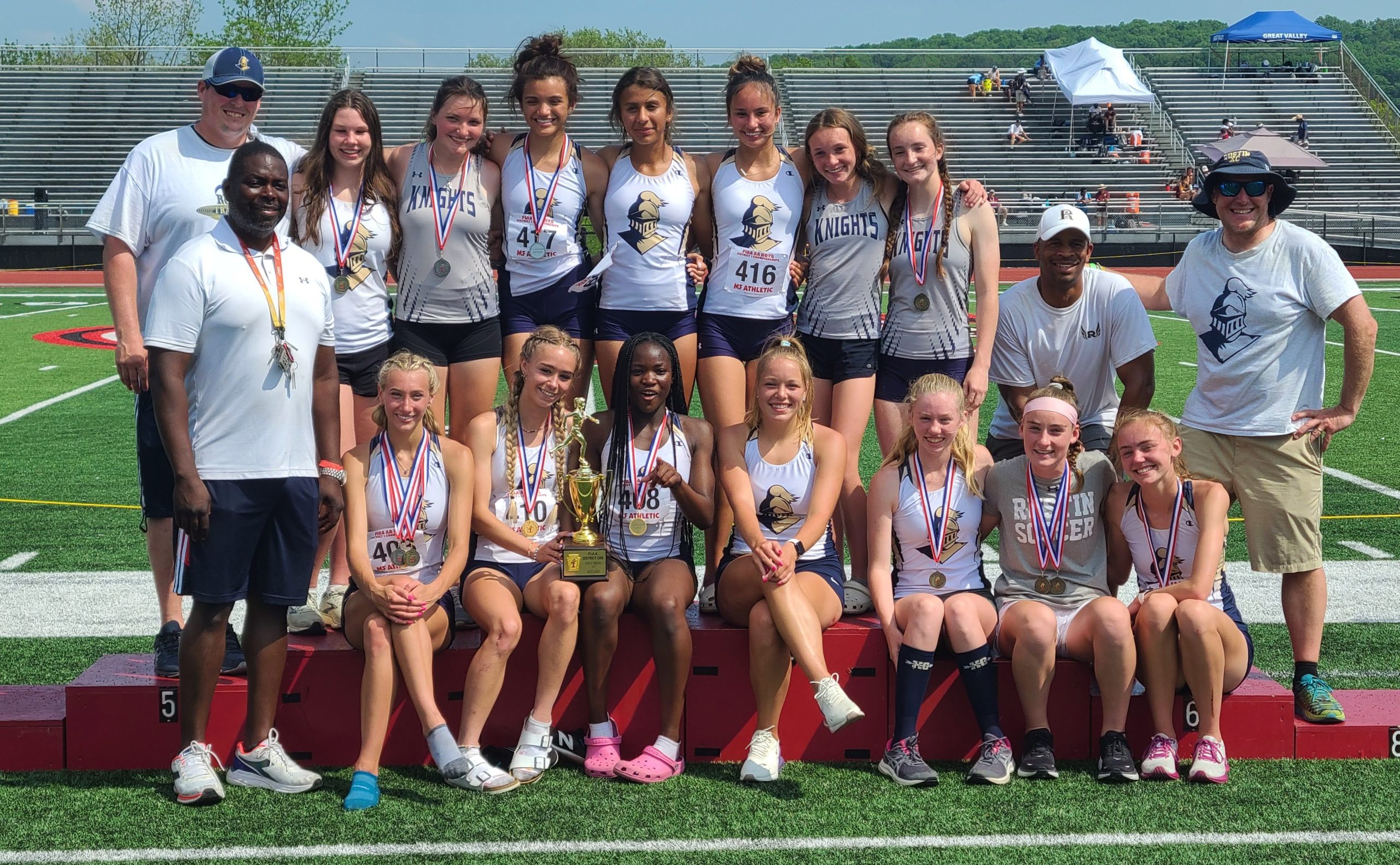 Rustin’s Ava Alexander powers to the finish line to win the 3A girls’ 4×400 relay and capture the team title in the final event of the day at the District 1 Track and Field Championships Saturday at Coatesville. (Austin Hertzog – MediaNews Group)

Caln >> The temperature was 91 degrees at the PIAA District 1 3A track & field championships at Coatesville High School Saturday, and the West Chester Rustin girls team was as red-hot as the weather, capturing its first-ever District 1 3A team title.

The Golden Knight girls did it with only one first-place finish Saturday – at the closing event, the 4×400 relay, anchored by junior Ava Alexander, the 2021 Daily Local News Girls Track Athlete of the Year.

“I am super-proud of our girls – no matter what the expectations of them, they always seem to exceed it,” said West Chester Rustin girls coach Jim Collins. “Everybody chipped in – sprints, mid-distance, throwing, jumping. We had lots of second- and third-place finishes.”

Cheltenham’s Eyota Bey, right, and West Chester Rustin’s Ava Alexander, center, receive the baton for the final leg of the 3A girls 4×100 relay during the District 1 Track and Field Championships at Coatesville. Cheltenham won the event. (Austin Hertzog – MediaNews Group)

Alexander anchored the Golden Knights’ first-place girls 4×400 relay with a strong closing spurt down the stretch. Rustin was in second place when Alexander took the baton.

Alexander currently is not competing in the triple jump (she won a gold medal in the triple jump at States last spring) because she is recovering from a stress fracture in her back, but qualified for States in three events Saturday – the 4×400, the girls 400 meter run (she placed third at 57.12) and the girls 4×100 relay (she anchored the Golden Knights’ second-place quartet).

The Coatesville boys’ team poses with the district championship trophy after winning the team title at the District 1 Track and Field Championships Saturday at Coatesville. (Austin Hertzog – MediaNews Group)

Coatesville finished first in the standings for the District 1 3A boys team competition, with two individual victories Saturday. It was the Red Raiders’ third team title in the last four District 1 championships, with Coatesville taking the title in 2018, 2019 and now 2022.
Coatesville senior Lebron Bessick won the boys 400 meter dash with a closing spurt to pull ahead of Pennridge senior Joey Gant down the stretch to post a PR 47.47, and Coatesville senior Rhyel Miles-Eubanks won the boys javelin with a PR throw of 189-6 (his prior PR in the javelin was 165).

“Today, I just tried to stay through the point, and focus,” said Miles-Eubanks.

“I’m very proud of our team and our coaching staff,” said Coatesville boys coach Damien Henry. “It was definitely a team effort. When Drew Domurat finished first in the high jump on Friday, it got us started. Rhyel winning the javelin was huge, and Lebron winning the 400, finishing third in the 100, and anchoring our third-place 4×400 team were all huge contributions.”

Another first-place individual finisher Saturday was Downingtown West junior Carolyn Tarpley, who won the girls 3200 meter run with a time of 10:52.20. One day earlier, she finished fourth in the girls 1600 meter run and qualified for States in that event as well.

“I took it a little more conservatively today because of the heat,” said Tarpley, who took over the lead in the second lap Saturday. “I didn’t focus on splits but on the competition.”

Oxford sophomore Macaela Walker won the girls 100 hurdles with a time of 14.57. For Walker, whose PR is 14.48 (in Friday’s preliminaries), this will be her first time at States.

Avon Grove’s Ramsay Haartz, who won the event with a 151-11, competes in the 3A boys’ discus Saturday during the District 1 Track and Field Championships at Coatesville. (Austin Hertzog – MediaNews Group)

“I just tried to get over [the hurdles] and not mess up my trail leg,” said a happy Walker. “I kept my focus and didn’t let [the importance of Districts] get into my head. I ran it like it was another meet.”

“I’ve been imagining this [winning a district title] since I was a freshman,” said a smiling Moneme, who was fourth in the 100 meter run at Districts and 9th at States last spring. “I tried to ignore the [hot] weather today.”

Avon Grove’s Ramsay Haartz, who won the event with a 151-11, competes in the 3A boys’ discus Saturday during the District 1 Track and Field Championships at Coatesville. (Austin Hertzog – MediaNews Group)

One of the more interesting individual first-place finishes Saturday was by Avon Grove senior Ramsay Haartz, who won the boys discus with a throw of 151-11. This is the first year of throwing for Haartz, who was a football player for the Red Devils last fall.

“I was bored this spring, so I decided to take up throwing [discus and shot put],” said Haartz, who will be joining the Marines after his high school graduation.

Haartz, whose PR in discus was 157-6 at the Ches-Mont National meet earlier this spring, said, “The key for me today was being calm – it was a mental game. I had struggled in the discus in some meets earlier this season.”

Haartz has been coached in discus throwing at Avon Grove by Joe Fritsch, who said, “Ramsay works really hard, and believes in what we do. In the throwing, it’s important that you compartmentalize – that if you make a bad throw, you put it behind you and focus on the next one, like a baseball closer who blows a game.”

Avon Grove head track coach Eric Broadbent said, “Ramsay hit one off the cage in warmups, but after that, each of his warmup throws got better, and then his first throw [in the finals] was his best one.”

West Chester Rustin senior Dayshawn Jacobs won the boys triple jump with a PR of 47-5. His prior PR was 46-3, and this will be his second year at States – he will be competing in both the triple jump and high jump. Next fall, he will play football for West Chester University.

“I was just really feeling good out there today,” said Jacobs, when asked for the key to his first-place finish.

Here is a look at the other top local teams Saturday at the PIAA District 1 3A track & field championship:

Unionville senior Alex Pancoast was third in the girls’ shot put (39-6.75) and will be headed to States. One day earlier, she finished first in girls discus with a throw of 131-1, nearly 17 feet ahead of the second-place finisher. The Unionville quartet of senior captain Orenda Lin, junior Mirielle Sherman, sophomore Morgan Chapman and freshman Maya Bruce was seventh (49.41) in the girls 4×100 and qualified for States. Unionville junior Aryan Abbaaju finished sixth (9:32.70) in the boys 3200 meter run.

Avon Grove senior Noah Lennon finished third in the boys 300 meter hurdles (40.39) and is headed to States. The Red Devils finished fifth in the girls 4×400 (3:57.59) with a quartet of Paige Clark, Eden Veenema, Leia Conlan and Payton Smith and qualified for States. Avon Grove was seventh (43.45) in the boys 4×100 with a foursome of Connor Carroll, Tyler Barton, Noah Lennon and Avinabo Poddar. Carroll was sixth (22.61) in the boys 200 meter run and Poddar was eighth (22.69).