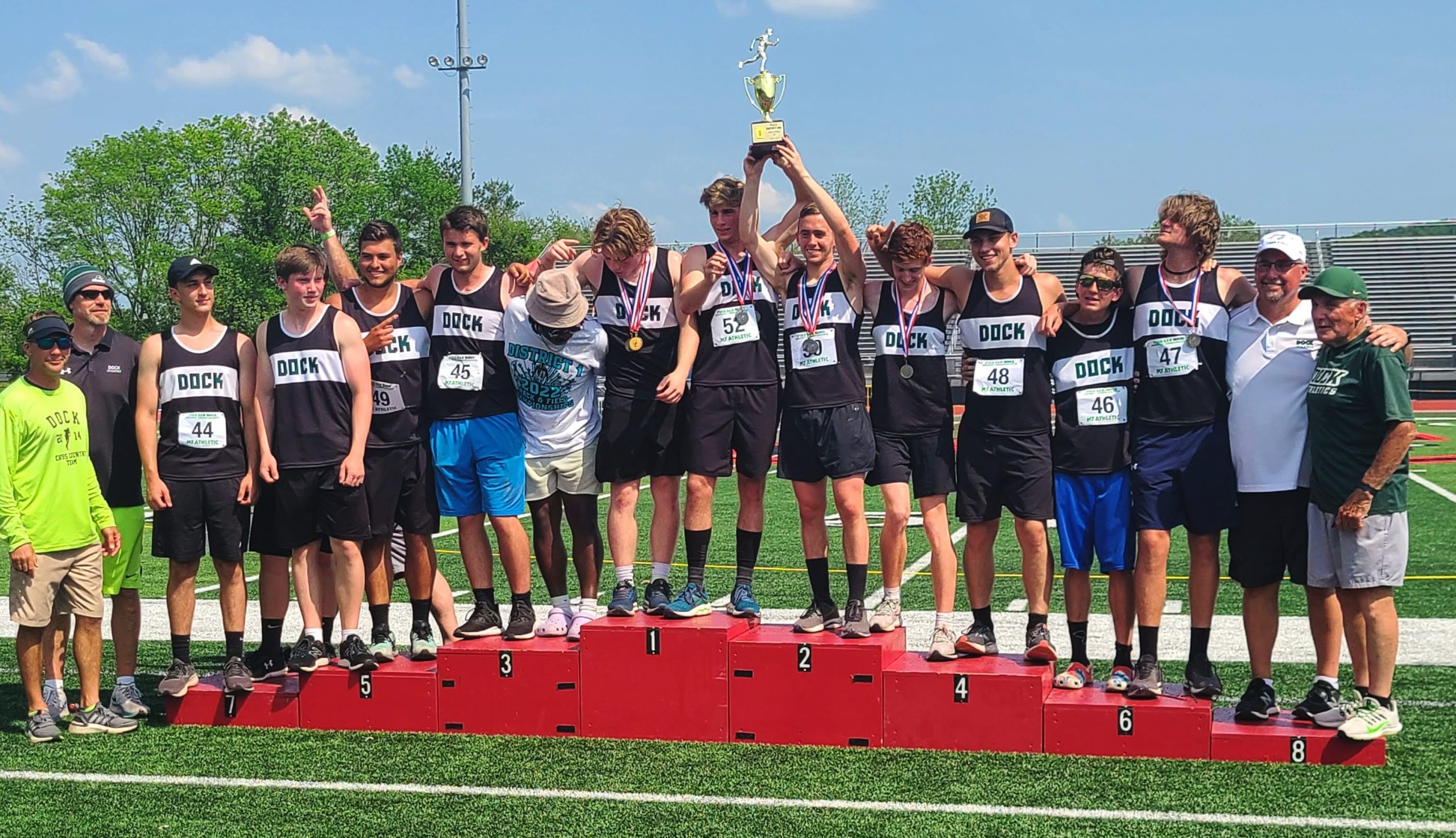 Jonah Chavez’s journey typified that of his team.

“It’s amazing. I’ve worked with these guys every day for the past three years,” the Dock senior said Saturday afternoon. “We had hard days, we had good days. But the thing that kept us going is that we love each other. And we worked to the bitter end.

“And even though this is the end, I wouldn’t have had it any other way.”

The Dock boys raise up the District 1-2A trophy on Saturday, May 21, 2022 at Coatesville. Kev Hunter, MediaNews.

The Pioneers combined their many efforts for another district team title, as Dock repeated as District 1-2A Champions and captured its sixth trophy in the past 10 seasons.

It was a scorching afternoon at Coatesville High, but one that culminated with the Pioneers raising their heads – and the trophy – high in the air.

Said Chavez of his districts experience: “Hot, certainly hot. But overall the weekend was unforgettable.”

It was a weekend that saw Hatboro-Horsham’s Brian DiCola race to gold in the 1,600 and 3,200 in Class 3A, and the Central Bucks West boys punctuated the meet with a gold medal in the 4×400 relay.

Jonah Chavez was a driving force for Dock in its District 1-2A title defense on Saturday, May 21, 2022. Kev Hunter, MediaNews.

“I felt good coming in. I worked hard all week, prepared for it. I knew all I had to do was just do my job. And let things fall where they may,” he said.

Chavez was a medalist in the sprints last year when the Pioneers won Class 2A.

But at the beginning of the spring, a new opportunity emerged.

“He was an injured sprinter. And I threw him into the throws and said, ‘Jonah, listen. I think you can score points for us,'” said coach Tim Eger, who has guided Dock through its decade of dominance. “He has a live arm and he’s a hard worker. And the javelin just really started to click for him. He’s probably our number-one or number-two discus thrower. And our number-one shot putter. He scored big points for us today. He had a monster weekend.”

“These guys worked real hard. We didn’t have a lot of first-place finishes but we knew that the points would add up and we had a senior-heavy squad,” said Eger. “They did really good work for us.

“We pulled in some points in the throws, exceeded in a couple of areas there. We asked a lot from our hurdlers and our sprinters. And they did a really nice job for us. The pole vault helped out a lot.”

“The big thing was we showed our depth,” Eger said. “You’re not gonna go out there and win every race. Sometimes you gotta do it as a full-team effort.

Chavez, much like his teammates who were gathered around him on the infield at meet’s end, enjoyed the ride.

“I just kept with it,” he said. “I had great coaches around me. It just turned out the way I wanted it to.”

Pennridge’s Joey Gant, center, competes in the 3A boys’ 400 meters during the District 1 Track and Field Championships at Coatesville. (Austin Hertzog – MediaNews Group)

Said the senior of when he first started throwing: “It was scary the first couple meets. I thought I was gonna kill somebody with the javelin.”

There were ups and downs, but he soon found his form.

“It took progress, days where you felt like you were the worst one there,” Chavez said. “At some point, I knew it was gonna turn around. I had faith that it would at some point.”

Many of the Pioneers now move on to next week’s PIAA Championships in Shippensburg.

“It won’t be the same, because not everybody will be there. But for me, I just gotta keep the same energy, go in focused,” Chavez said. “I know I’m not one of the better ones there but the thing I can do is try, and I’ll try as hard as I can.”

Dock finished with 124 points, topping the 102 by Jenkintown.

Geordan Gossett won the 110 hurdles for Jenkintown with a time of 16.27.

Coatesville rose to the top spot in Class 3A boys, scoring 53 points. Pennridge (40) and Hatboro-Horsham (38) had outstanding meets, finishing second and third.

Meanwhile, Delco Christian won the 2A girls title, scoring 190 to finish ahead of Dock (149).

One of the finest races of the day came in the 3A boys 100 dash, where Norristown’s Jaden Brown (10.52) and Pennridge’s Joey Gant (10.67) battled to the finish, with Brown pulling out the win.

Souderton Area’s Dekai Averett captured the silver in the 110 hurdles, crossing in 15.04.

Cheltenham’s Eyota Bey, center, leads the field to win the 3A girls’ 400 meters during the District 1 Track and Field Championships at Coatesville. (Austin Hertzog – MediaNews Group)

Also for the Knights, Devin Nugent pulled away to victory in the 300 hurdles, with a time of 37.54. Teammate Jabrie Gaymon was a silver medalist in the triple jump with a leap of 45-8.