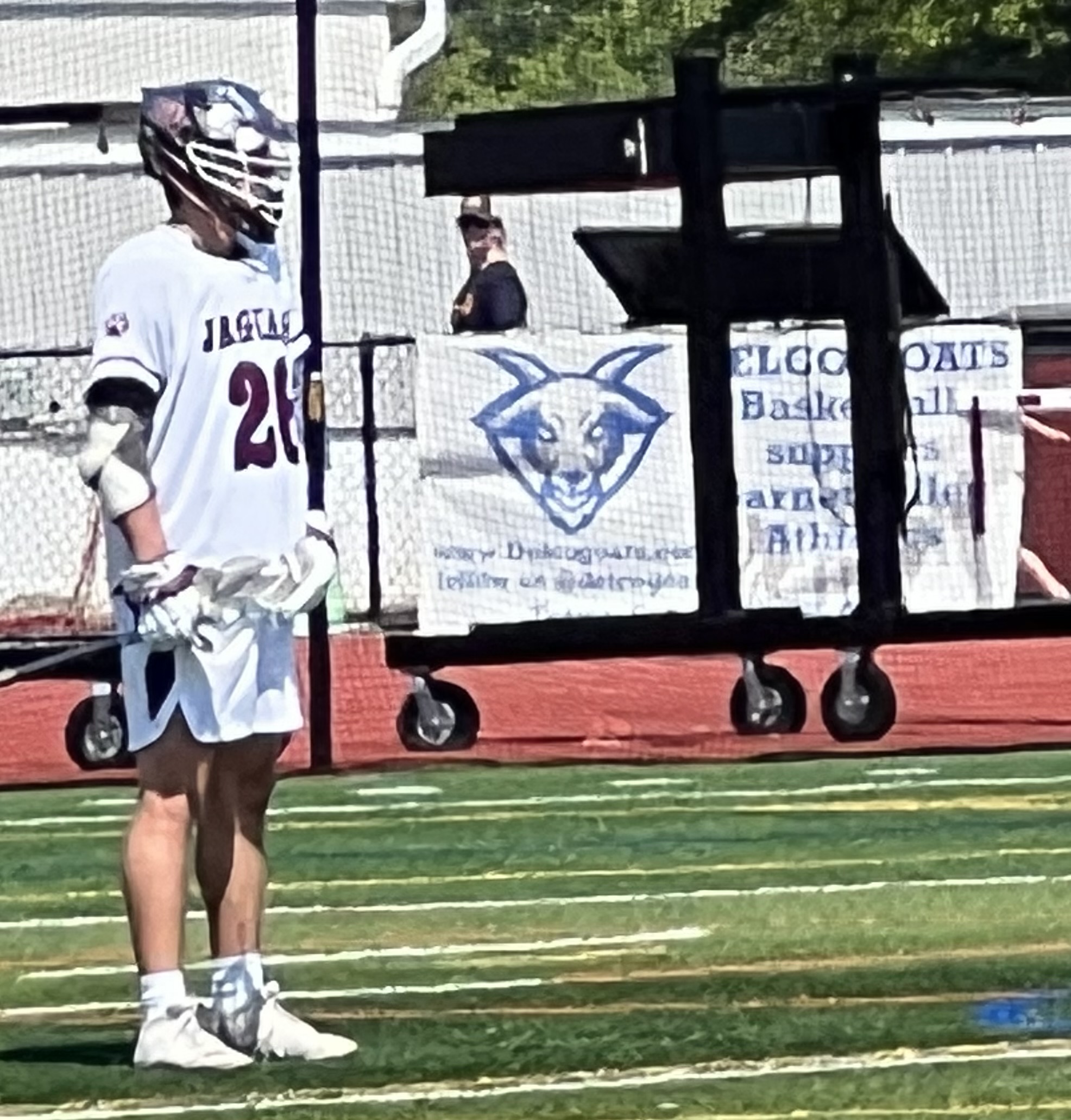 Garnet Valley attackman Max Busenkell had a hand in all six goals, but the Jaguars were upset by Unionville, 7-6, in the District 1 Class 3A quarterfinals Saturday. (MNG Staff Photo)

CONCORD — Tough as the outcome was, it could have been worse for Garnet Valley, which on Saturday became the second straight upset victim of 19th-seeded Unionville in the District 1 Class 3A tournament.

The sixth-seeded Jaguars (14-6) still can reach the state tournament through playbacks despite their stunning 7-6 loss in the quarterfinals to the Longhorns.

The same cannot be said of third-seeded Downingtown East, who the Longhorns eliminated Thursday.

“Our season is not over,” said Jaguars senior attack Max Busenkell, who scored five goals and dished one assist. “We had one hiccup. It happened. It can’t happen again because we know if we lose again, we’re out. I think everybody knows that we don’t want the season to end.”

The Longhorns finalized the victory in 91-degree heat at Moe DeFrank Stadium on Brayton Bellafiore’s fourth goal, which seemed to deflect off bodies and into the net. Bellafiore muscled through a scrum to get the shot, igniting a noisy celebration with 1:23 remaining. It made a winner of Niko Kotch, who made 16 mostly sensational, did-you-see-that saves.

It was a major win for the Longhorns, who are peaking at the right time and at the expense of programs that have tormented them through the years.

“Honestly Unionville has never been like, great at lacrosse,” Bellafiore said. “We’ve always been good, but we’ve never beaten Garnet Valley ever since middle school, and it feels good. They played a hell of a game. They’re a great team. We kind of had a bumpy start to the season. We’ve overcome that and now we’re here.”

The Longhorns (11-8) take on second-seeded Downingtown East in Tuesday’s semifinal.

The Jaguars will be thinking about the last goal in this seesaw affair for years, unless they win one more game to reach states, hosting seventh-seed Spring-Ford Tuesday.

“It was a heck of a game,” Jaguars coach Frank Urso said. “We got a lead, they fought back, both teams played really good defense, and both goalies played well. It was going to be whoever makes a mistake first or whoever takes advantage of a mistake first. That last goal, I don’t know what it hit but I don’t think it cleanly went in. It hit something. But that’s the game. That’s lacrosse. That’s what happens.”

The first quarter was a defensive gem for both teams. For all the crisp passing and fierce checking, Owen Kupsey of Unionville had the only goal.

Busenkell went off in the second quarter, scoring four goals, and they were dazzling. Circling to the right and shooting around picks, he gave the Jaguars a 4-3 lead at intermission, scoring the go-ahead marker with 2:43 left.

The game was tied at 5 entering the final frame, and after Luc Spano and Busenkell exchanged goals, Bellafiore converted, and the Longhorns played 83 strong seconds of defense.

There were a lot of long looks in the Garnet Valley tent.

“Coach always says it may not be the most talented team that wins, but whoever executes better that wins,” Busenkell said. “They came out and executed really well. They were really patient on offense. They kept the ball out of our hands. They played solid defense. And their goaltender was great. We just couldn’t get enough past him.”

The Jaguars will be reminded at practice Monday it’s not the force behind the shot, but where it goes, that counts. Urso didn’t want to demean the stellar game played by the Longhorns, but he was no fan of his team’s shot selection.