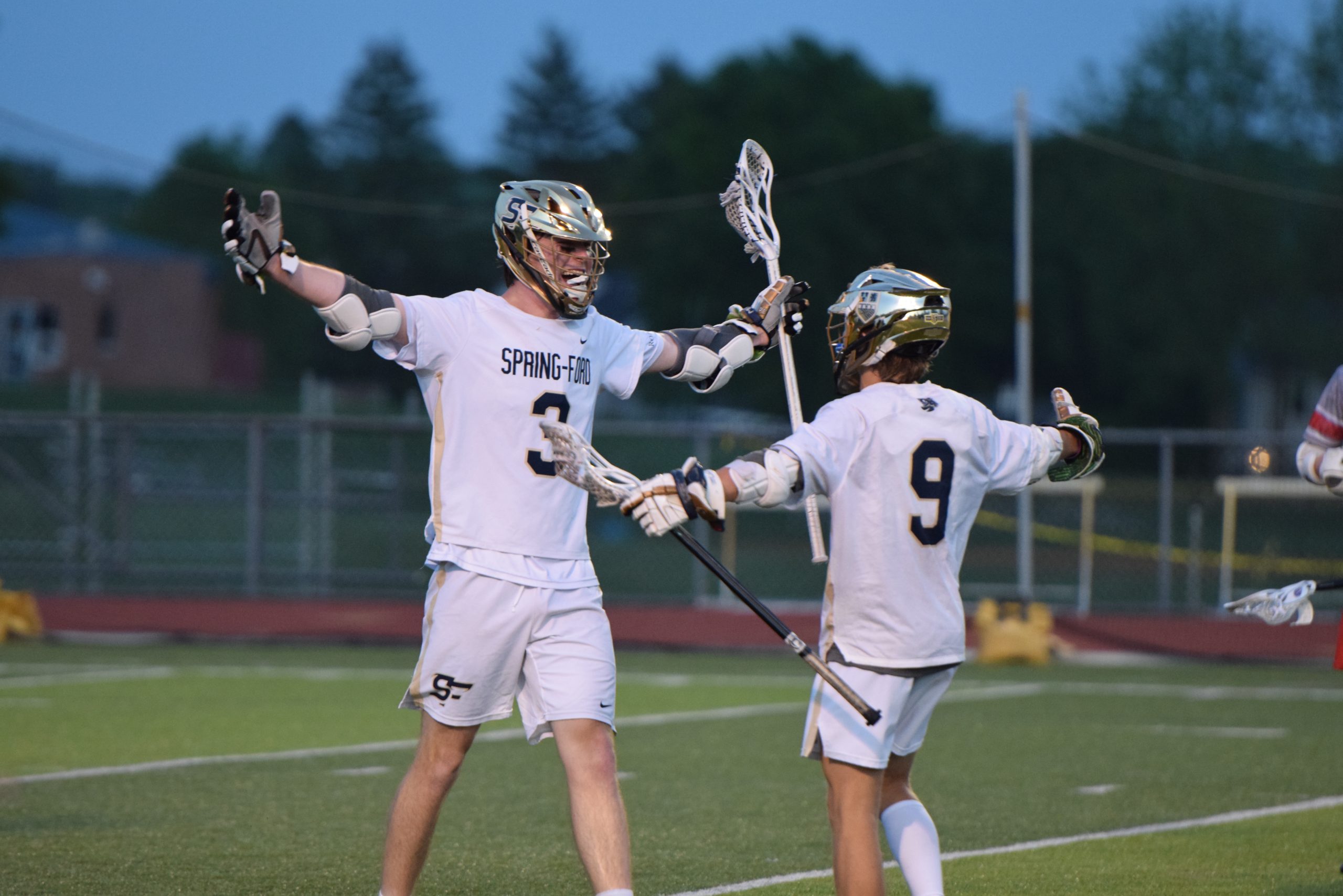 Spring-Ford's Will Bonawitz celebrates with Justin Wixted (9) after his goal against Owen J. Roberts during Thursday's District 1-3A second round game at Spring-Ford. (Austin Hertzog - MediaNews Group)

ROYERSFORD >> The reemergence of the Owen J. Roberts boys lacrosse team under rookie head coach Mikey Zadroga has been one of the stories of the season around the Pioneer Athletic Conference.

The Wildcats rejoined the conversation by reaching last week’s PAC championship game and making the second round of the District 1 Class 3A playoffs for the first time since 2014.

But when it comes to lacrosse in the PAC, the conversation starts in one place: Spring-Ford.

The conversation continues with Spring-Ford after Thursday night’s rematch of the PAC title game in the second round of the District 1 tournament as the host Rams kept the upperhand thanks to a hot start and better play in the big moments in an 11-7 ousting of Owen J. Roberts.

No. 7 seeded Spring-Ford (15-4) advances to a quarterfinal meeting with No. 2 Downingtown East – an 11-5 winner over Avon Grove Thursday – on Saturday at 10 a.m. A win clinches a spot in the PIAA tournament.

Owen J. Roberts, which routed North Penn in the first round Tuesday, concludes its season at 15-7.

Senior Will Bonawitz had the hot hand with four goals, junior Will Fish added three scores while senior Chris Quigley had two goals and an assist and junior Justin Wixted had a goal and an assist to lead the Rams.

Will Jaeger was the offensive star for the Wildcats with a four-goal night. Dylan Gazda scored OJR’s other two goals.

Despite the 11-time PAC champion’s league standing, it is Spring-Ford’s first trip to the district quarterfinals since 2018. They qualified for states in 2017 as the No. 5 seed from D1 but have never made the semifinals.

“Our guys are steady,” said S-F head coach Kevin Donnelly. “They’ve been playing like this for a while. Our defense is our core. Our offense, when they’re clicking, is awesome as well. We just need to keep our base. A couple times that broke down tonight but we’ll fix that tomorrow and be ready for Saturday. Hopefully we can keep our momentum continuing.”

The oddity of playing the same team in consecutive games aside, the occasion and opportunity was front of mind for the Rams, not the familiar opponent.

“To us it’s just another game,” said junior long stick midfielder Brandon Solomon. “Every game is just the next game. Being a district game we knew the competition was going to be higher. The stakes were higher, the energy was higher.”

That showed from the jump as Spring-Ford burst out to a 3-0 lead just 3:15 into the game.

“They won the first face off but we were able to get a nice turnover off of that on defense and go straight down to the goal. Most of those early goals started with the defense,” Solomon said. “Our plan was to bury them as fast as we could and get their hopes down.”

To the Wildcats’ credit, they did not fold. While the PAC final lacked uncertainty in the result, OJR battled back and had the better of the second quarter to get within 5-3 with 1:55 to the half on a good take from Jaeger.

But Wixted found a cutting Bonawitz for a tide-turning score in front of goal with five seconds until the break for a 6-3 lead.

Will Bonawitz from Justin Wixted with 5 seconds until the half to get Rams lead back to 3 pic.twitter.com/fzEbh2dRPC

“They still didn’t believe in the first quarter. The first three goals of the game were quick and they weren’t sure they could play with Spring-Ford,” said OJR coach Zadroga. “I think throughout the game they started to believe – it got pretty tight – but that first quarter I really think was the difference.”

Similar to the first half, the Rams came out stronger and built a 8-3 lead on a Quigley-to-Bonawitz goal with 4:20 left in the third. OJR had another surge to get within 8-5 and had a two-man advantage late in the third but Solomon, Nolan Marsh, Parker Smith, Kyle Huston and Christian Marchini killed the penalties and Spring-Ford never looked back.

“Spring-Ford doesn’t make the same mental mistakes we do,” said Zadroga. “The little, simple mistakes – and hopefully by my second, third, fourth year here we’re not making those – are the night and day difference. You can’t make them, you always have to be smart.”

“They trusted me, they trusted the coaches that we were going to be there for their best interest. They bought in,” said Zadroga. “Those seniors are the reason why Owen J. Roberts will beat Spring-Ford, Perkiomen Valley, win a PAC championship, win a second round game in districts. They started this culture and they led the way.”

“I loved every minute of it. I don’t want to go one step forward and three steps back, I want to keep building. We lose 18 seniors, but I feel like we have really good talent coming up.”

Spring-Ford started the season 1-2, but used a 9-7 win over Downingtown East (15-2) – their opponent Saturday – as a jump-off point to the season.
“After the Easton game (April 2) early in the year we recognized we really needed to step up. We were not playing our best lacrosse. We were actually playing pretty bad,” said Bonawitz. “We got to work and started focusing on our goal of trying to get as far as we can.”

Thursday’s rematch with a known opponent went to plan. Spring-Ford will hope for the same Saturday.