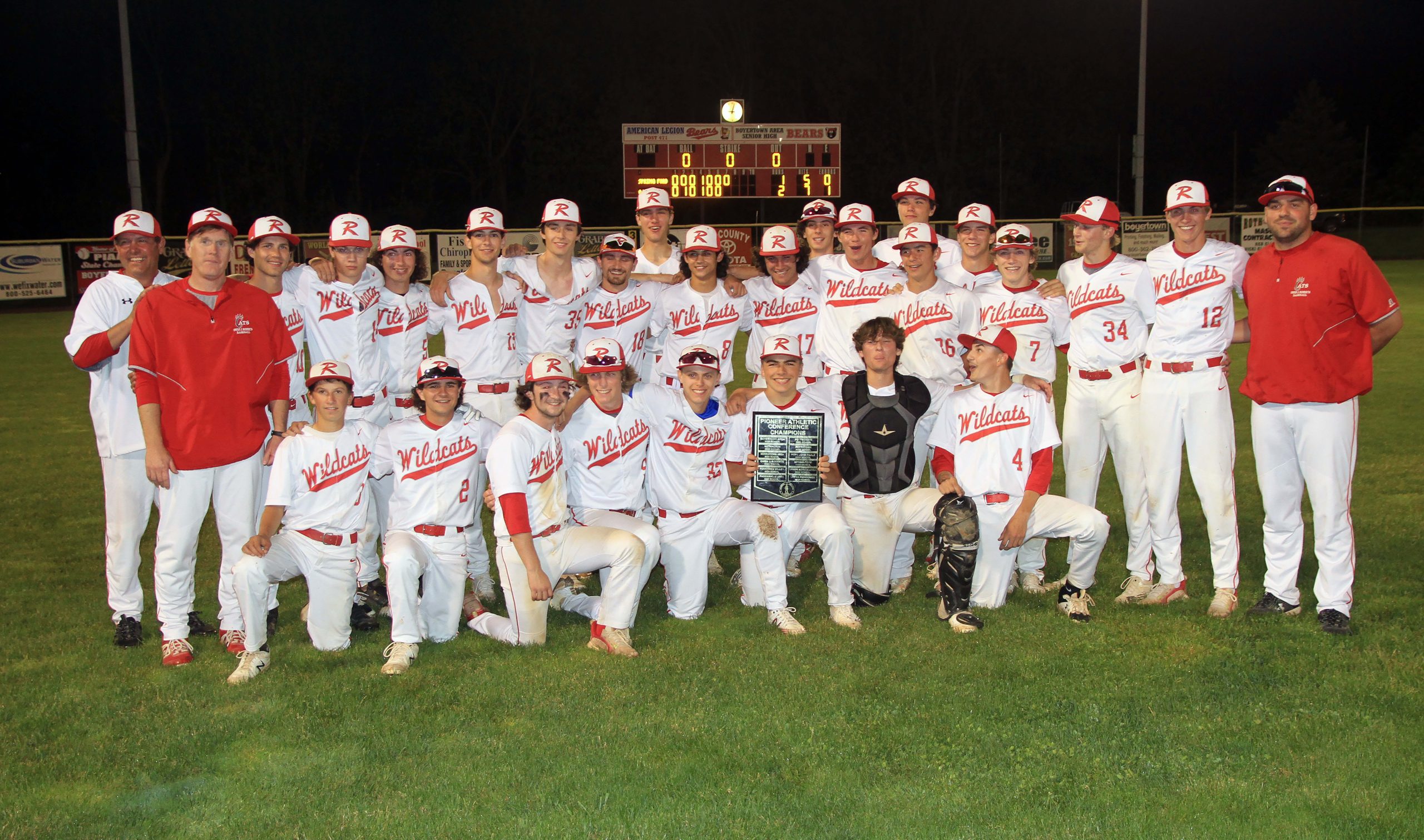 BOYERTOWN >> The Owen J. Roberts baseball team has had a number of different heroes during its 18-game win streak.

“Everybody’s gotta be ready to be that guy,” OJR coach Greg Gilbert said of the team’s motto.

Whether on the mound or in the batter’s box, the Wildcats have an unprecedented depth of ‘guys’.

Just enough of them rose to the occasion once again on Thursday night.

Owen J. Roberts rode two of its top arms and some big at-bats from the bottom of its order to a 2-1 Pioneer Athletic Conference championship win over defending champion Spring-Ford.

It was the program’s first PAC title win since 2010.

“It’s absolutely amazing, unreal,” said senior right fielder Zach Santise, who had what turned out to be the winning RBI. “One through nine we’re solid all the way through every game. It’s always anybody. It’s up to everybody.”

Gilbert had three likely options to hand the ball to Thursday after junior Zach Brockner tossed a complete-game shutout in Wednesday’s semifinal win over Perkiomen Valley.

Senior Jarred Berish, junior Tristan Dietrich and sophomore Tyler Brashear were all fine candidates. Berish got the start, but the trio each made their own impact on the game.

Berish allowed one run on four hits and a walk in 4.2 innings before Brashear came out of the bullpen to record the final seven outs.

Dietrich (2-for-2, double) did his damage at the dish, driving in the Wildcats’ first run in the second and coming in to score their final run in the fourth.

“Tyler, he’s lights out all the time,” Berish said. “He comes in and nothing’s going on. Tristan with that big single (in the second), that was big.”

Dietrich put OJR up 1-0 in the second when he knocked in senior Ethan Sabatino by driving a two-out, two-strike breaking ball into left field. The Rams tied in the top of the fourth when senior first baseman Jake Books (3-for-3, two doubles) scored on a sac fly by junior Nick Moyer.

With two outs in the bottom of the inning, Dietrich doubled for his second hit of the day. Santise, the team’s No. 8 hitter, followed with another two-out, two-strike double to put the Wildcats up 2-1 after four.

“It was a huge hit,” Santise said. “Two strikes, two outs, runner on second, the pressure was on. I was thinking about the team and how I need to be there and do my job and I got it done.”

“That’s what we talk about all the time is somebody’s gotta step up and do it for us that day,” Gilbert said.

The Rams got the tying run to third in the top of the seventh with two outs, but Brashear forced a lineout to Sabatino at second base to finish off the win and start a championship celebration near the mound.

“It was a great feeling getting that last out,” Sabatino said. “We worked really hard to get here and it paid off, so we’re all really excited.”

Spring-Ford got a gem from junior Dylan Broderick in his first postseason start. Broderick allowed two runs on two walks and seven hits, while striking out four batters.

Sophomore Ryan Cecconi (2-for-2) joined Books with a multi-hit day.

The Rams had to replace six spots in their lineup and essentially their entire pitching staff from last year’s PAC championships squad, but still fell just two runs short of becoming the league’s first repeat champion since Boyertown in 2012 and 2013.

“It’s a shame. The game could have gone either way,” Harrison said. “We had hitters up that I’m fully confident in with runners in scoring position and sometimes it just doesn’t work out. If we had to do it all over again, I wouldn’t change a thing.”

“I love these guys and am proud of how they competed and represented our program tonight.”

The Wildcats have found different ways to win throughout the season. Owen J. Roberts hasn’t lost since a 3-1 loss to Methacton on April 4.

“We felt the downfall of losing to Methacton and we’ve come back strong every game and we’re ready to play,” Santise said.

The Wildcats have plenty of talented across the board, and some championship experience (several members were on the Norchester American Legion state champion team last summer).

Gilbert said there’s something more that makes this group special, taking it back to the top of the PAC for the first time in 12 years.

NOTES >> Senior shortstop Dean Mihos had two hits for OJR, including a perfect bunt that stayed on the foul line.