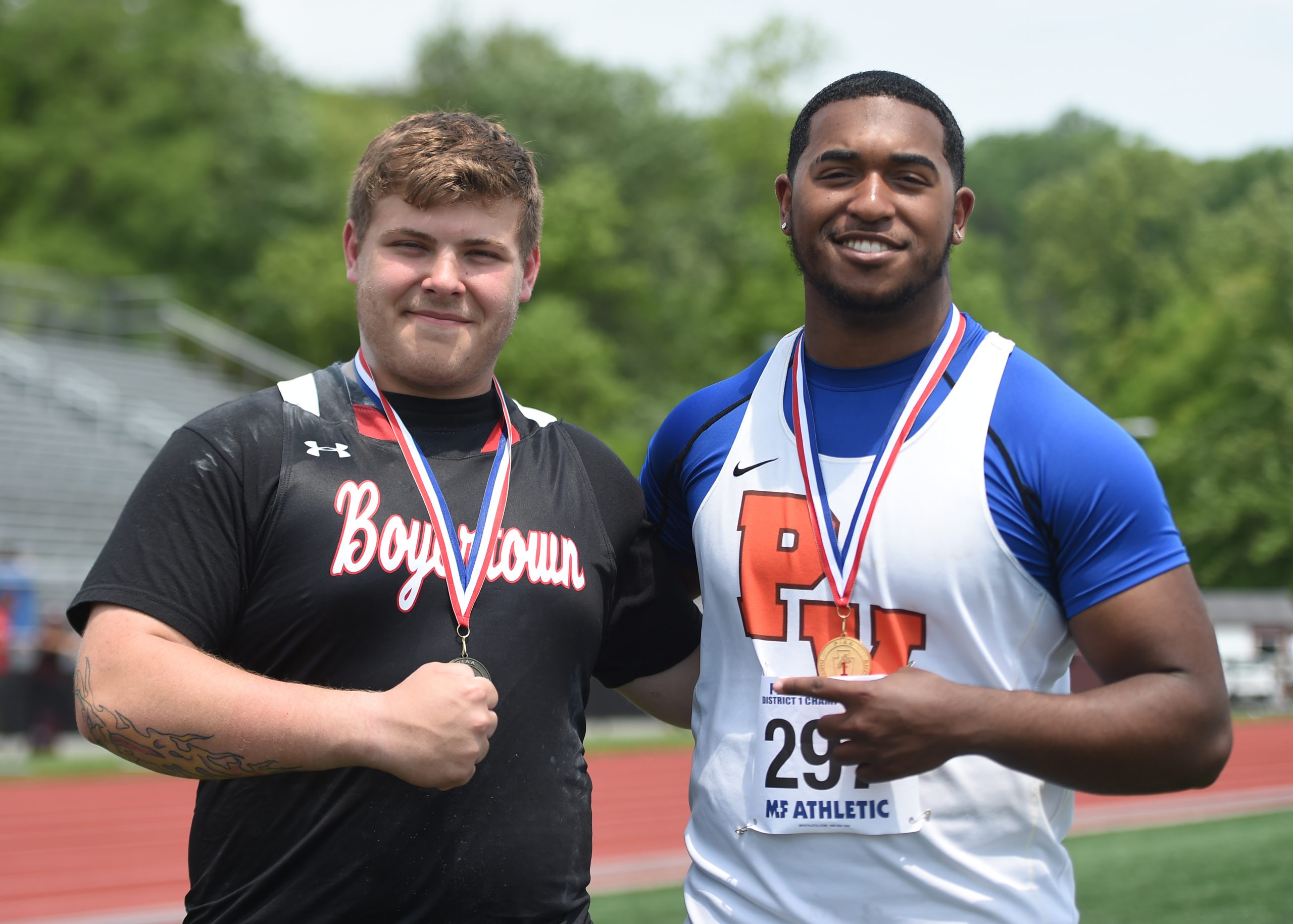 COATESVILLE >> Perkiomen Valley’s Ronde Washington and Boyertown’s Jayden Miller have pushed each other almost every day for the past three years.

The results showed Friday at Coatesville when the two offseason training partners stood next to each other on the podium at the District 1 Track and Field Championships.

Washington stood at the top with a gold around his neck and Miller stood to his right with a bronze.

“Personally, I think it’s great because you have somebody who’s your friend but also who you can compete with,” Washington said of competing with Miller. “That’s a nice friendly competition and helps you want to do better.”

“I love it,” Miller said. “I train with Ronde everyday and nothing’s better than coming out here and pushing each other to do better. It’s honestly my favorite thing.”

Spring-Ford senior high jumper Nene Mokunchu joined Washington as a gold winner on Day 1 of districts. Methacton senior Addison Gormley followed her in the event with a bronze finish.

Owen J. Roberts freshman Gianna Leimeister earned a silver medal in the javelin, and Methacton senior Coco Dunham claimed a bronze medal in the long jump to round out the PAC’s top three finishers on Day 1.

The PAC’s shot put medalists — Washington and Miller —  first connected at a throwing clinic at Millersville. The two PAC standouts have trained in the offseasons together since they were sophomores, most recently at Garage Strength in Fleetwood.

“Everyday is almost like a competition, whether it’s in the weight room or in the circle,” Washington said. “We just leave it all there.”

Washington, coming off a meet record throw of 60-6 at the PAC Championships last week, couldn’t replicate his throw Friday. But his 58-2 on his second attempt was more than two feet further than the second place throw from Haverford’s Michael Powel (56-0).

“I just took my experiences from last year, all those times where I came close to being on the podium, just took that, bottled it up,” Washington said. “I had a little chip on my shoulder, trained hard, worked hard and just left everything in the weight room and circle so I could come out on top.”

Miller improved on last year’s place and finish with a bronze medal throw of 55-04.50

“I was kind of all over the place, I suffered a little tendinitis in my wrist, but it was nice to get out there and drop a bomb,” Miller said. “I did better than last year, so that was awesome.”

Miller finished 19th at the PIAA championships last season when he was one of just five non-seniors in the event. Next week, he will be joined at Shippensburg by his friend and training partner Washington.

The duo hopes to push each other to another podium finish.

“It makes me really happy that I’m seeing Ronde do better and myself do better,” Miller said. “Nothing’s better than working hard and seeing progress. I’m excited to go to states and see what we can do.”

“I think it will be awesome, just like another day of training,” Washington said.

Busy, Busy >> Spring-Ford senior Nene Mokonchu barely had a chance to catch her breath on Friday.

Even during the medal ceremony for the Girls 3A high jump, Mokonchu had to sprint over from the 200-meter registration before taking the top step and putting on her gold medal just as her name was being called.

Mokonchu, the top-ranked high jumper in the state, cleared 5-7 in the high jump to highlight her busy day.

“It’s all about confidence and seeing my confidence grow over these past few years is something that really touches me at least,” Mokonchu said.

Mokonchu had her eyes on matching or surpassing the District 1 record of 5-9, but had to attempt the jump right after running the 400 prelims.

She cleared 5-7 to secure a gold medal, swapped her shoes to run the 400, then switched them back before attempting the 5-09 jump.

“It’s really invigorating,” Mokonchu said of her busy day, “but at the same time it was kind of a little disappointing because you always want to be focused while you’re doing something. Today, I saw with a lot of the events that I did I was always in a rush and therefore didn’t do as well as I wanted to, but it’s okay.”

Mokonchu finished 12th in 400 prelims, missing out on one of the top eight spots and a place in the Saturday’s finals, but she still has another busy day planned.

She will help the Rams’ 4×400 relay and also hopes to run in the 200 finals, in which she is seeded sixth. The prelims were suspended Friday due to weather.

“It was a little disappointing, but I still have chances,” Mokonchu said.

Bronze Warriors >> Methacton senior high jumper Addison Gormley has had a high bar to shoot for throughout her career with Mokonchu always in the postseason field of her event.

It’s served as both motivation and relief knowing that bar is likely too high to reach.

“Honestly, it’s nice. I feel like because it’s always something to chase for, but it also kind of makes it a little easier to just focus on my own stuff,” Gormley said. “She’s honestly great to jump with, a super nice girl and great competitor.”

For the second straight season, Gormley joined the Spring-Ford star on the podium. Gormley improved on last year’s eight-place finish with a bronze medal. She cleared the 5-3 mark on her first try to earn her career-best district finish and a spot in states.

“I definitely felt really good,” Gormley said. “I didn’t really place super well last year at districts … so I was just excited to be a little higher up today. I felt confident.”

Methacton senior Coco Dunham, who finished 12th in the long jump at last year’s district meets, had a leap of 17-06.50 for her third-place finish to give the Warriors a second bronze medal jumper.

“I try to come in here calm because I freak myself out sometimes at these big meets,” Dunham said. “Today I was pretty calm and just did what I had to do. Just jumped the best I can.”

Dunham is also seeded third in the triple jump on Saturday, in which she placed fifth last season.

Owen J. Roberts’ Gianna Leimeister stands on the podium with her silver medal for the javelin during Friday’s District 1 championships at Coatesville. (Owen McCue – MediaNews Group)

Leimeister surpassed her preseason goal of reaching the PAC championships in the javelin long ago. A silver medal finish on Friday will send her to the state championship meet.

“My main goal in the beginning of the year was just make PACs,” Leimeister said. “But I won PACs and then I came here and was like, ‘OK, let’s just try to do my best.’”

Leimeister set a PR to win PACs last week with a throw of 106-10. The freshman one-upped herself again Friday when she reached 112-5 on her third throw of the day.

The toss was behind only Villa Maria Academy’s Marin Rosser (117-8) and just ahead of Mount Saint Joseph Academy’s Haley Stefanik (112-1) and Pennridge’s Nicole Rindone (112-00).

“Honestly, I just kind of do it,” Leimester said. “I was down at the bottom. I wasn’t throwing what I wanted to, and then I was like, ‘I have to do it in order to get to states.’”

Leimeister couldn’t put a finger on what exactly has contributed to the recent jump in her performance, but she did note she’s a fan of the big meets.

“Meeting new girls is really nice with the meets, and you just want to up the ante and do well,” Leimeister said.

Best for Last >> Phoenixville senior Yash Agnihotri didn’t have expectations of a medal finish on Friday. When he saw the weather forecast, however, he knew there’d be a chance.

“If I could see the heat radiating off the track, I know a lot of people are going to quit, it’s going to be a hard race,” Agnihorti said. “I saw that happened. … I just knew that I had to have a tough mindset. My coach really helps with that.”

After both heats finished, the time was good enough for an eighth-place finish and a spot on the podium to conclude his high school career.

Place on the Podium >> Methacton senior Vaughn Lackman finished seventh in 1,600 (4:25.58) and Boyertown’s Cassandra Trujillo finished seventh in the discus (109-02) to round out the PAC’s individual medalists on the day. The Perkiomen Valley girls 4×800 finished sixth with a state-qualifying time of 9:30.73.