District 1 Class 3A Boys Lacrosse: Goldstein’s passes are gifts that keep on giving for Radnor 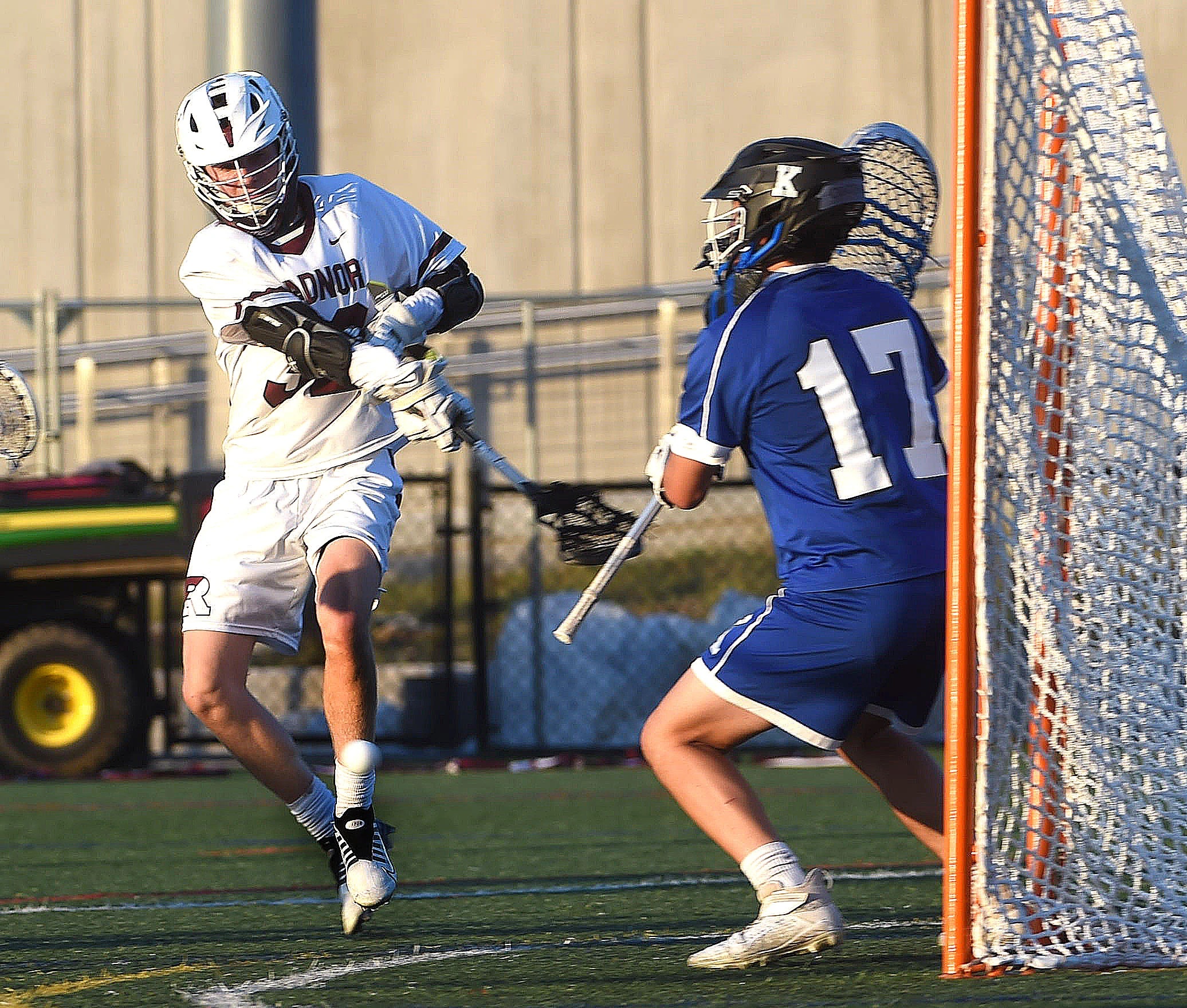 Ryan Goldstein, left, aims at the ankles against Kennett goalie Eric Hrabal in the second quarter Thursday night. Goldstein and Radnor were on their way to an 18-3 victory in the District 1 Class 3A playoffs. (PETE BANNAN - DAILY TIMES)

With that, it will always need a player like Ryan Goldstein.

“He can throw passes on a rope,” said Radnor coach John Begier. “If you are 15 yards away, whether he’s got the ball in his left or right hand, he can make that pass immediately and with a lot of accuracy.”

In a 16-3 triumph over Kennett Thursday night that sent the Raptors to the District 1 Class 3A quarterfinals, Goldstein made like a magician, delivering five assists, including four in a span of 4:23 of the first quarter.

That early blast gave Radnor a 9-0 lead and the push to continue its defense of a PIAA state championship as it heads into a third-round game Saturday.

And then there was Ryan Goldstein picking up where last he was in a postseason, providing the intangibles … and the tangibles, too, adding a goal to the outburst.

“Our guys know if they get open, he will get him the ball,” Begier said. “He’s the quarterback of our offense, as he was last year. He’s dodges with his head up, and that’s why he is able to see what is there and in front of him. He’s very unselfish.”

Ahead of the Raptors Friday was Kennett, which fell to Radnor in the 2021 state championship game. The 16th-seeded Blue Demons enjoyed two goals from Bo Freebery and another from Colin Jung, with Jake Freebery contributing two assists. Kennett, though, was stung by some early penalties and remarkable Radnor shooting accuracy, never recovered and finished its season at 11-8.

“Radnor is a great team,” Demons coach Bob Allvord said. “We knew it was going to be a challenge. Seeing them last year when we saw them, we knew what was ahead of us. It’s a fantastic team.”

If that means the scoring will be balanced, Ryan Goldstein will be content to make that happen.

“I’m not a big goal-scorer,” he said. “Feeding is my favorite thing, getting other guys involved in the offense. Even in basketball and other sports I play, I have always been a big assist guy. I’ve never been the strongest or biggest guy, but I have always been able to pass. Getting other guys involved is fun. It’s just the way I’ve played my entire life.”

“We know it’s still going to be a grind,” Ryan Goldstein said. “We’ve got to keep getting better. We have a lot of practice ahead and a lot of work to do to get back to where we were last year. We have to keep winning.”