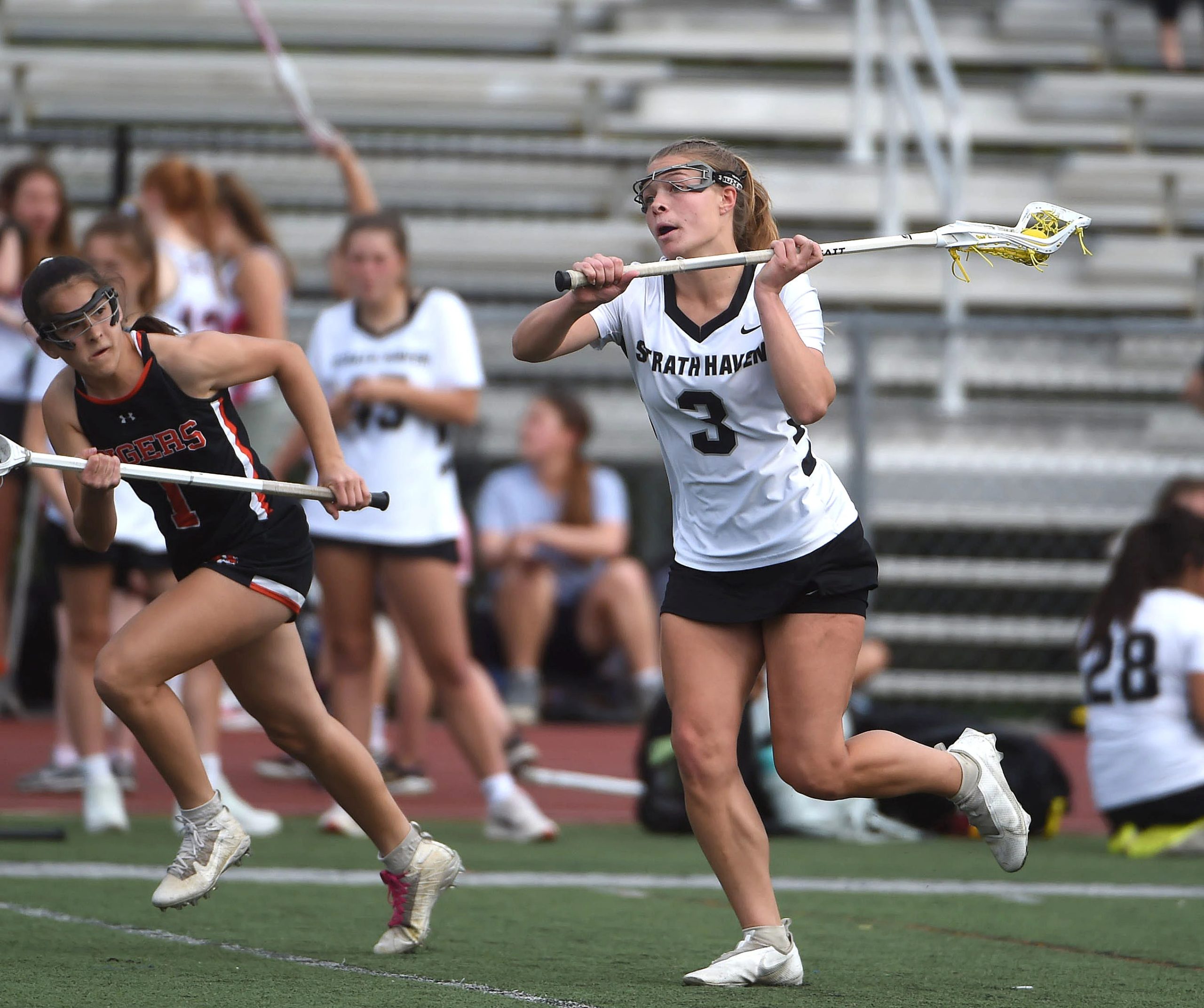 NETHER PROVIDENCE — Strath Haven clinched a berth in the PIAA Class 2A state lacrosse tournament Thursday with a methodical 17-5 win over Upper Perkiomen in the second round of the District 1 tournament.

It was the fifth straight win for the Panthers, who got another monster game from Temple-bound attack Laura Conner, who contributed five goals and one assist.

The Panthers also marveled at an impressive all-around effort from Kaitlin Neiczpiel, who scored two goals, moving her to within seven of the career 100-goal mark. She also won 10 draw controls. The latter goal sparked the Panthers to a 13-1 lead at the intermission.

The second-seeded Panthers (12-6) host either third-seeded Jenkintown or Gwynedd Mercy, the 11th seed, in the district semifinals next Tuesday. Those teams play Friday, poor field conditions pushing the game back a day. Though Upper Perkiomen wouldn’t go away easily Thursday, the semifinal foe will be a step up in competition for Strath Haven.

The Indians just couldn’t get untracked in the first half against the Panthers, who also got three goals from Julia Steere and two goals and two assists from sophomore Annie Ignazio.

“They’re very good,” Indians coach Catie Sobotor said. “They play stronger teams than we do. I just told our girls at halftime that we have nothing to lose. Go out there, play hard, play aggressive and go have fun. And they came out after the game was over and they had smiles on their faces because we competed. They learned like ‘OK, now we see this is the type of team we want to be, and this is what we’re going to have to do to achieve this.’

“I’m not disappointed at all in these kids. They worked their tails off. We were 4-9 last year and now we are 13-7, and that’s all their hard work, trusting each other and listening to the coaches.”

The Panthers also have a lot of trust in their coaches and in Conner, who directs the attack in just about every conceivable fashion. Whether it’s using her speed to make the defense commit, darting behind the cage or bursting straight down the boulevard Conner is a force to be reckoned with on every position.

Interestingly Conner lives in the same neighborhood as the famous football Connors, including former NFL linebacker Dan, as well as another former professional player in Isaac Jones. Something in the water, perhaps?

“It’s crazy,” Conner said. “We’re e-r. They’re o-r. They were football and we’re lacrosse. My older brother Jeff is playing lacrosse at UVA. And I have a twin brother Austin who plays.”

Let’s just say the U.S. Postal Service shouldn’t be ashamed of delivering the scholarship offers to the wrong addresses in that neighborhood.

Anyway, it’s full steam ahead for the Panthers after hitting some sizable potholes earlier in the season. Don’t forget that they played for the 2A state title last year.

“A lot of momentum now,” Conner said. “I keep saying it, we are so grateful to play in the Central League with a bunch of great teams to get us ready to just come out and (win big).”