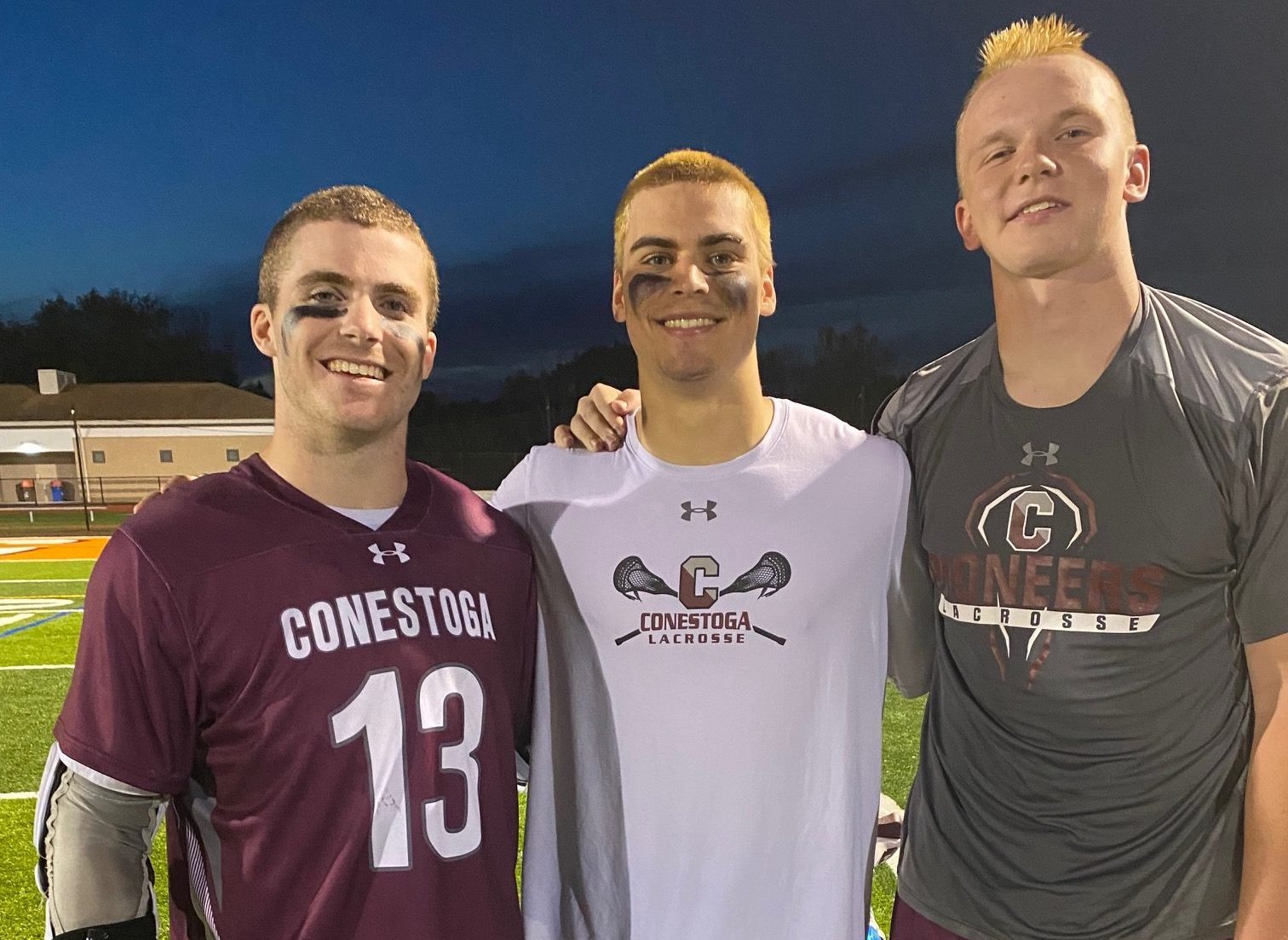 GRATERFORD >> Attrition is an unpleasant fact of life in scholastic sports.

Statistically, at least a quarter of your team is going to graduate after each season – and in reality, the number is often much higher.

That doesn’t make it any easier when it comes time to play your final game.

The 18 seniors on Perkiomen Valley’s lacrosse team did just that on Thursday night, leaving Thomas J. Keenan Stadium one final time after a 17-6 loss to No. 12 Conestoga in the District 1-3A boys’ lacrosse playoffs.

Conestoga roared to an 8-1 lead after one quarter, showing their full array of offensive abilities with four of Patrick Reilly’s seven goals coming in the opening stanza. Chase Kelly added a pair of tallies on the way to a hat trick of his own, and Drew Merschel finished the early display with a behind-the-back effort with seconds remaining in the period.

“We’ve battled through a lot of injuries this year,” said Pioneers coach Brody Bush, “and it’s allowed us to develop a lot of depth. We’re more experienced, and we’re playing better lacrosse now than earlier in the season.”

After a sluggish start to the campaign, the Pioneers are peaking at the right time. Their 10-7 regular season record earned them a No. 12 seed in Districts, a vast underestimation of the team’s potential.

With PV playing a ten-man ride, Stoga’s precision passing was a key to setting up numerous clean looks at the goal early.

Long-stick midfielder Ryan Schappell and defenseman Will Preston keyed an effort that produced nine first-quarter turnovers, allowing ‘Stoga to build the early lead out of repeated opportunities in transition.

“We feel safe with Pat [Jameison, a Duke commit who had nine saves Thursday] in net,” said Preston. “When we’re making the plays we need to make, it’s tough to score on us.”

The Pioneers took a 9-2 advantage into halftime and built it to 14-4 by the end of three periods. Aside from Reilly’s seven goals and Kelly’s hat trick, Merschel tallied twice to lead the offensive onslaught.

While the loss is sure to sting for a while, no one can take away the accomplishments of Perkiomen Valley’s class of 2022, which comprised a big part of the heart and soul of the school’s first PAC lacrosse championship squad one year ago.

“We talk about leaving the program better than you found it,” said Vikings coach Bryan Churchey. “That’s not just about a number of wins – it’s culture, dedication, in the community, it’s any number of things.

“We reloaded our midfield entirely this year. Our two goalies this year [Caleb Woolsey and Chuck McCue] just started playing the position last year. They’ve worked their tails off, and that’s what I value regardless of tonight’s outcome.”

Conestoga improved to 12-7 and progresses to Saturday’s quarterfinals, the latest chapter in their long and storied rivalry with Central League foe Springfield-Delco, the No. 4 seed who eliminated Methacton on Thursday night.

Thursday night was not the first meeting for the Pioneers and Vikings this year — the two teams met in one of the better regular-season contests of 2022, where PV’s Aidan McCabe scored at the buzzer to give the Vikings a 7-6 victory.

“We came in with a plan, and with a chip on our shoulders tonight,” said Schappell. “We’ve worked on the things we’ve needed to and reviewed the film to find our opportunities.”

Preston, who missed the initial contest between the two teams, said watching that loss from the sidelines fueled his own effort Thursday night.

“We wanted this one badly,” he admitted.

“That game’s been haunting us,” added Reilly. “We thought about that game for a while, and hoped we’d get a chance to [avenge the loss.]”

The Pioneers want the next one just as badly. They dropped a tight 6-4 decision to Springfield-Delco on May 6, and similarly return to the scene on Saturday – this time with a berth in PIAA 3A states in the balance.

“We’re used to seeing Springfield late in the season,” said Reilly. “They’re a great team with a great coach – I played club with, and against a bunch of those guys. We both have championship aspirations.”

For the Vikings, who earned the No. 5 seed in Districts, it’s an earlier-than-hoped end to the campaign at a record of 14-5. With the graduation of the aforementioned large class of seniors, it’s also something of an end to a memorable era of Perkiomen Valley lacrosse that saw this year’s class overcome the loss of their sophomore seasons to become champions as juniors and leaders as seniors.

“We’ve beaten teams we’ve never beaten before, achieved things that hadn’t happened in this program,” concluded Churchey. “These guys leave here with a championship to their names.

“Conestoga was clicking on all cylinders. They shredded our ten-man ride, and made it look easy. They’re playing at a very high level right now.”