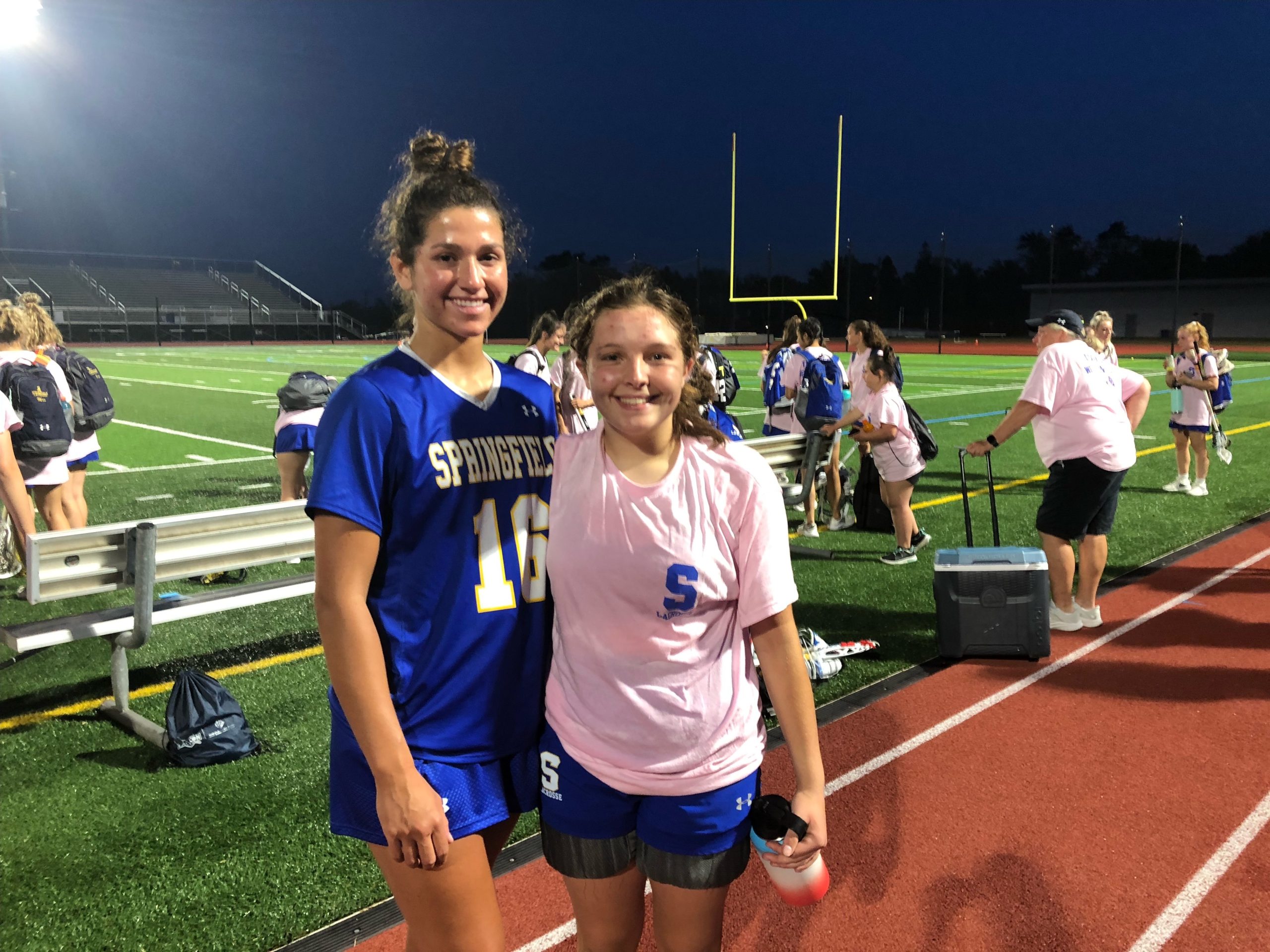 LANSDALE >> Within just a step after cutting toward the net, North Penn’s Riley O’Donnell was surrounded.

The forays that had so often led to a goal or an eight-meter opportunity for the Knights this season often ended in similar fashion on Thursday as Springfield Delco’s defense got there first. Between their hard-crashing defenders and stellar work in goal from sophomore Madison McBride, the Cougars put the locks on an offense that had run roughshod through the Suburban One League.

However, No. 14 Springfield Delco needed every bit of that defense as No. 3 North Penn’s was almost as good before the Cougars clawed out a 4-2 win in their District 1 Class 3A second round playoff game to reach the quarterfinals.

“That’s been our thing all year, doubling and crashing” Cougars senior defender Anabel Kreydt said. “We’ve really tried to work on our crashing and I think we did a really good job of that tonight. Every time they got in the eight, we did a good job of crashing and checking the middle.

“We’ve gotten a lot better with our talking and knowing our tendencies. Once we figured out which players to double on, the second girl could slide in right away so they couldn’t pass to the middle very easily.”

Jaclyn Guille had two goals, including the eventual game-winner, Mia Valerio scored and Erin DeStefano found the goal for Springfield Delco but it was the team’s defense starting with McBride in goal and backs Kreydt, Gabby Rizzio, Kara Clark, Allie Hunter and Lexi Aaron that stole the show. McBride made her presence known by clanging her stick off the posts before each eight-meter attempt and her presence felt with 10 saves between them.

With the combination of the sophomore stone-walling the handful of looks they did get and the Cougars defense sliding it to crowd out any other would-be shot attempts, the Knights got knocked off their pace. Lauren Blanch scored in the first half and Kerry O’Donnell, after what seemed like she fought through the whole defense, scored in the second but North Penn just never seemed to find the key to open the lock Springfield Delco had put on the Knights’ offense.

“They slid to help, their help and doubling of the ball was so fast,” Knights coach Heather Mellow said. “It threw us, we weren’t prepared for having so many extra defenders come at us that quickly. We were making a ton of little flip-passes back and forth and that’s just not what we do.”

No sequence better summed up the Cougar defense’s effectiveness than the final 54 seconds of the first half. Kreydt and Valerio had both been shown yellow cards, leaving Springfield down two good defensive players in a two-goal game and the Knights couldn’t score. They caught a bit of a break when an eight-meter shot caught the post, but when the ground ball went back to North Penn for a second chance, McBride simply stifled the shot and gathered the ball just before the break.

“Once I get some saves, they’re done,” McBride said. “It’s all about the angle, you just have to cut their angle off and that’s about it.”

North Penn’s defense did everything in its power to keep the Knights in the game. Goalie Kiera Holt was excellent as well, making seven saves with several coming at point-blank range and backs Haley Decker, Grace Macnamara, Ella Burget and Hannah Mallitz plus mids Kerry O’Donnell and Emily Varilla held their ground and kept marks on the Cougars’ potent attackers.

The Knights, who lose seven seniors, walked off the field knowing they had left everything had on it. Varilla, who helped her team win the draw control battle 6-2, noted the accomplishments North Penn had this spring, chiefly that 10-0 SOL record and National conference championship.

Varilla, who will play at La Salle, heaped a ton of credit on Springfield Delco’s defenders as well and the senior said the Cougars’ closing speed and the intensity of their crashes were a formidable roadblock for the Knights offense.

“We all talked at the start of the season about what were our goals and No. 1 was to go undefeated in the league,” Varilla said. “We had that in our minds all season and it’s what kept us going.

“I think tonight showed how much fight we all have in us and how we’re not going to give up, no matter what. We knew this was a tough team and to have it be 4-2, it showed how close we were and that we could hold our own.”

Kreydt felt the Knights started to get frustrated in the second half with how well the Cougars were doubling the ball, taking away passing angles and just generally not getting beat, which the senior chalked up to a season’s worth of working on crashing and communicating.

“Our crashing has been so much better,” McBride said. “They’ve done an outstanding job of stopping the ball and getting in front of the ball.”

With about five minutes left, the Cougars took over possession and were able to effectively run out the clock to clinch a spot in Saturday’s quarterfinal round against Methacton. While that’s not an uncommon practice, most teams don’t use their backs to help facilitate that final act as much as Springfield Delco does.

A 4-2 lacrosse score doesn’t happen too often but the Cougars again put their trust in their defense to see it out and the unit delivered.

“We trail a lot, usually our goalie clears, we’ll clear it far but we know we always need to trail,” Kreydt said. “We’ve worked all year on trailing then setting up to get it around and making sure everybody gets a touch.

“It definitely felt more comfortable than it should have, but even at 4-2, when we were holding the ball down there, I felt pretty good.”