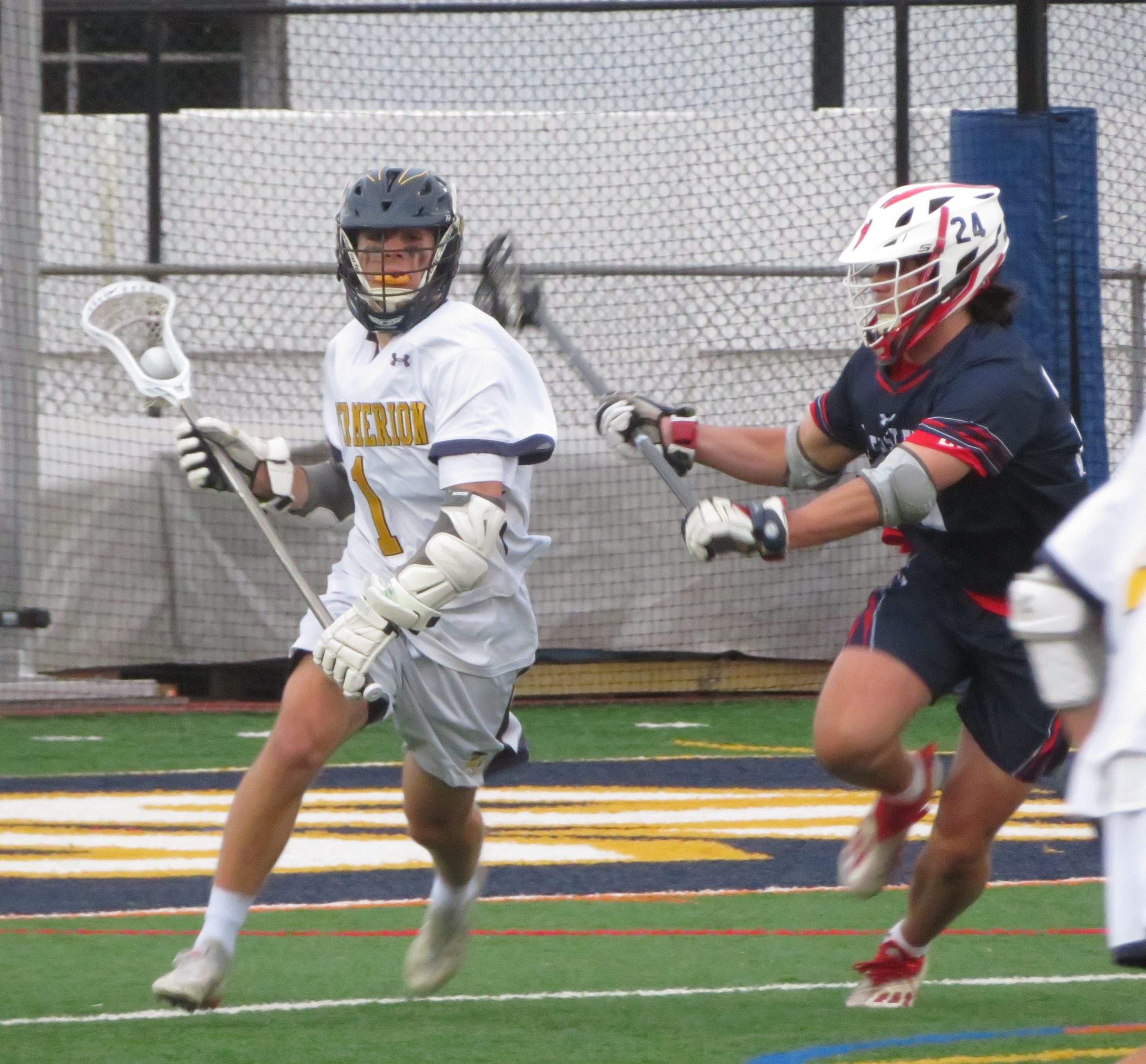 UPPER MERION >> Casey Lamey just wanted to get to the fourth quarter. The Upper Merion junior has seen his team take over in the final 12 minutes all season and believed they would do it again against Holy Ghost Prep in the first round of the District 1-2A playoffs.

To essentially turn the fourth quarter into a 12-minute game, Lamey scored with less than six seconds remaining in the third to tie the score at six.

The fourth-seeded Vikings dominated the fourth quarter and picked up the first district playoff win in school history, 11-8, over the fifth-seeded Firebirds Wednesday night at Upper Merion Area High School.

“They came back and fought so hard,” Upper Merion coach Brady McCormick said, “especially in that fourth quarter. They fought so hard and earned it. They did exactly what you need to do to win in the playoffs. Just grind and grind and grind. I told Ryan Becker, our faceoff guy, I told him he was going to own the fourth quarter. I know he didn’t have 100%, but he was huge in turning the tide.”

“Our fourth quarter in every game is our best usually,” Lamey said. “We like to pick it up at the end.”

Lamey’s goal tied the game, 6-6, after the fourth-seeded Vikings fell behind, 6-4 – their largest deficit of the game.

Collin McCormick cut the deficit to 6-5 with 2:44 left in the third. Defenseman Truman McCormick set up the score when he forced a turnover, picked up a groundball and went end-to-end. He fed the ball to Justin Besz who relayed it to Collin McCormick for the goal.

Upper Merion called timeout with less than 30 seconds left in the third to maintain possession and set the stage for Lamey’s equalizer.

“Me and Besz were like, ‘There’s 30 seconds left… Set picks, get someone open, try to get a goal real quick,’ and we got one,” Lamey said.

“We were just worried about making that score 0-0 again,” Upper Merion senior Brayden Marino said, “starting from the beginning again, working what we know.”

Collin McCormick put the Vikings ahead 7-6 less than two minutes into the fourth. The freshman was on an island with a defender and used a spin move to find space and put the ball in the back of the net.

“Once I got the ball I knew that kid couldn’t stick with me and his feet were slow,” Collin McCormick said. “Once I made one move I got by him, I rolled back and I was right there.”

Just 23 seconds after the Firebirds tied the game, Marino put Upper Merion ahead for good. Lamey got his foot stepped on while he had the ball, but somehow got the ball to Marino, who put it in for an 8-7 lead with 8:19 left in the game.

Upper Merion was whistled for a penalty after the play, giving Holy Ghost Prep possession and a man advantage. The Vikings played solid defense and got the ball back, running out the minute before drawing a penalty on the Firebirds. During their one-man advantage, Collin McCormick scored his fourth goal of the game to make it 9-7 with 6:44 to play.

“Being able to recover from (the penalty) and make something out of nothing the way we did was pretty awesome,” Brady McCormick said. “The D went down and did a hell of a job a man down, getting the ball up field and being able to make a play was huge. That definitely helped turn the tide.”

“We stayed strong, held them and put another one in,” Marino said. “That’s all we needed.”

“That was the big goal – once we got the two-goal lead,” Lamey added. “We were winning faceoffs, we were controlling the ball. After we got that goal I knew we were good.”

Maxwell Rittenmeyer kept Holy Ghost Prep in it. He scored his fifth goal of the game with 3:25 to go to make it 10-8.

The Firebirds earned possession, but Rocco Lindelow made a pair of big saves in net for Upper Merion and Qwynne Seals grabbed a key groundball with 2:35 left.

Holy Ghost Prep was threatening again with two minutes remaining, but Lamey put the finishing touches on the win. He blocked a shot, picked up the groundball and raced to the other end, setting up Besz got the score and three-goal lead with 1:22 remaining.

Collin McCormick led the Vikings with four goals while Marino added three, Besz two and Andrew Haney and Casey Lamey each had one.

The Vikings will face No. 1 Penncrest, a winner over No. 8 Pope John Paul II, in the semifinals Tuesday for a trip to the district title game and a spot in states.