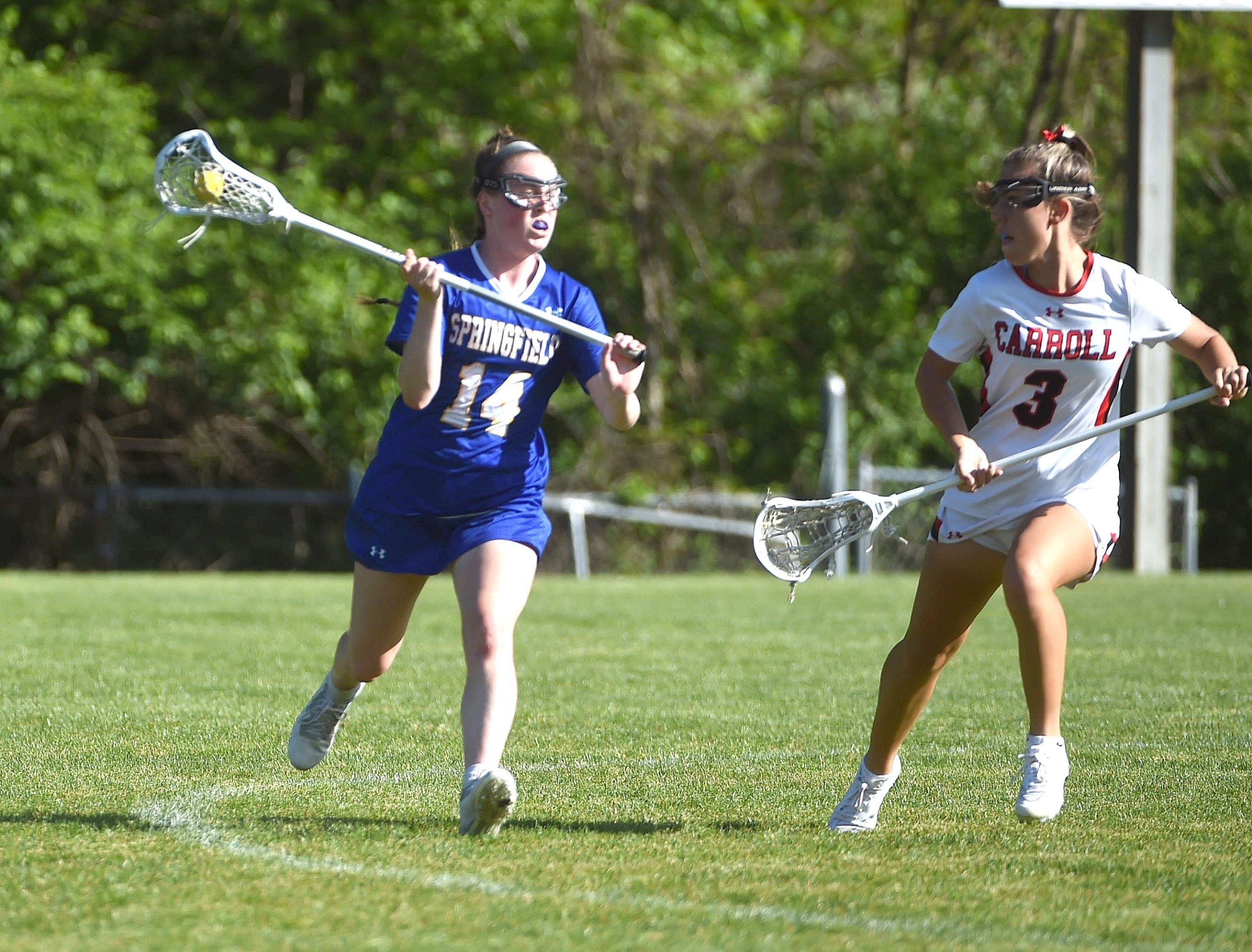 SPRINGFIELD >> Entering the District 1-3A tournament on a three-game losing streak Tuesday night, there was one ultimatum confronting the Springfield High girls lacrosse team: Put it behind, and put it behind quickly.

That challenge would take all of 90 seconds to complete. That’s how long it took the Cougars to win two draws, score two goals and set the agenda for a 15-3 victory over Upper Dublin that would serve notice they expected to stick around the postseason for a while.

“I think it’s important for us to get our momentum and our energy going to really set the tone for the game,” Springfield junior Mia Valerio said. “When we get those quick goals, it gets everyone pumped up and lets everyone know how this game is going to go.”

That’s how it started, how it went and how it finished for the 14th-seeded Cougars, who earned a 7 o’clock visit to No. 3 seed North Penn Thursday.

Valerio scored a hat trick, and Erin DeStefano, Claire Lynch and Molly Convery added two apiece as Springfield improved to 13-6. Paige Dinkel scored twice for the 19th-seeded Cardinals, who finished their season at 12-7.

“We always know Springfield is going to be good,” said Upper Dublin coach Dee Cross. “We did our best and they just took us out of our game. They are a great team.”

The speedy Valerio disrupted the Cardinals at one end of the field and shot with accuracy at the other. When she took advantage of a nifty interception by Anabel Kerydt and deposited her third goal with 18:55 left, the Cougars had a 12-1 lead and a sense that they had shed the effects of the losing streak.

“We played some really good teams, losing to Penncrest, Conestoga and Carroll,” Springfield coach Keith Broome said. “So it was nice for our girls to come back and win. It will build confidence for them heading into the next round.”

The preparation for that will begin Wednesday, when Broome will do as he has most of the season: See which of his two young goalkeepers is practicing well, then setting a rotation. As it was Tuesday, both sophomore Madison McBride and freshman Geena Augello will play against North Penn. Tuesday, McBride started and provided two saves. Augello added three saves in the second half.

“Once you make a couple of saves at the beginning,” Augello said, “it gives you momentum.”

Maddie Kane, Gabrielle Rizzio, Bella King, Jaclyn Guille, Devin Buggy and Olivia Gutkowski added goals for the Cougars, who were boosted by the return of Alexis Aaron after a season-long knee injury. Lynch and Molly Clifford had an assist apiece.

Tess Reardon scored and Aditi Foster had an assist for the Cardinals, who enjoyed strong play from Allie Gay, Erin Eby and Anna DiMartile among others.

“We were on our heels, trying to make up for it and forcing things that we don’t normally do,” Cross said. “This is not who we are, but they just made us play that way because they are that good.”