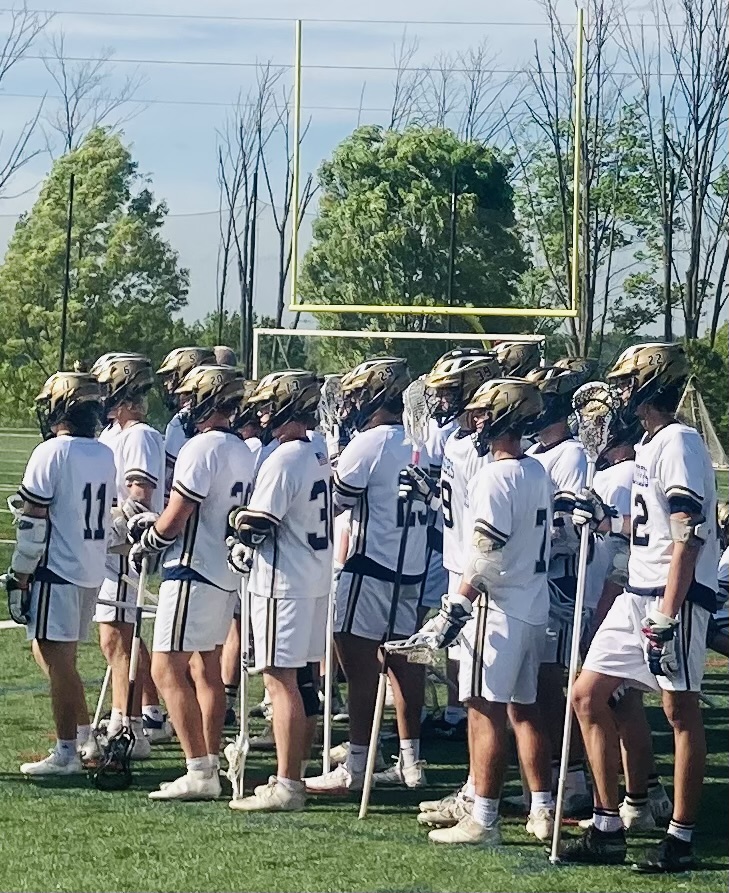 La Salle players watch from the sideline during their game with Devon Prep on Wednesday, May 18, 2022. (Kev Hunter/MediaNews Group)

SPRINGFIELD >> The bigger the stage, the tighter the bond between La Salle’s senior-led group.

The Explorers came together for an impressive 18-2 victory over Devon Prep Wednesday afternoon in the Philadelphia Catholic League semifinals, advancing to a finals showdown with rival St. Joe’s Prep.

“Good team win,” said La Salle’s P.J. Oppenheimer, whose hat trick was part of a big day by the attack.

Oppenheimer and fellow seniors Andrew Kelly and Jack Pilling were in sync all afternoon.

“We’ve been playing pretty well together all season,” said Oppenheimer. “So now, for the rest of the season, we just gotta turn it on.”

The Explorers take on St. Joe’s Friday afternoon at 4 p.m. at Cardinal O’Hara.

Said Oppenheimer: “It’s a rivalry game and they’re a very good team. We’ll be ready to go. It’s gonna be a good one so I think everyone on the team is excited.”

The Explorers broke the game open in the second quarter Wednesday, taking an 11-1 lead into the break.

“I thought we did a good job. Devon Prep did a great job of coming out early and played their game plan pretty well,” Explorers coach Rob Forster said. “We had to adjust a little bit but I thought we got things going. Our seniors kind of led us, which at this time of the year, is big.

“The guys did a good job of moving off the ball, shooting, and controlling our offense.”

La Salle huddles after its win over Devon Prep on Wednesday, May 18, 2022. (Kev Hunter/MediaNews Group)

The ball found many different sticks in the Explorer attack, with 11 players contributing goals.

“Week by week, we’ve had different guys stepping up,” Forster said. “We’ve just gotten better throughout the year. This is the time of the year where our seniors take control of the team and the coaches kind of sit back. It’s a player-led team now.

“It’s one of our goals, to win the Catholic League Championship. It will be a very good challenge for us.”

Said Oppenheimer of Prep: “They run a little bit of a zone, so shooting outside is key and if we play as a team, we’ll be good.”

Devon Prep’s Chris Walton runs up field with the ball, with La Salle’s Jack Pilling (left) defending during their game on Wednesday, May 18, 2022. (Kev Hunter/MediaNews Group)

Cole Brassington racked up 17 saves in net for Devon Prep, a team on the rise.

“He saw so many shots today and he was terrific for us,” coach Mark Consolo said. “I’m really proud of him – it was an awesome performance.”

Sophomore Nick D’Allesandro and Eammon Donovan each had a goal for Devon Prep, both assisted by senior Chris Walton.

Devon Prep’s Nick D’Alessandro controls the ball, with La Salle’s Collin Wakefield closing in during their contest on Wednesday, May 18, 2022. (Kev Hunter/MediaNews Group)

“The seniors have been terrific for us. I give them so much credit for steering the ship in the right direction,” said Consolo. “That’s where we’re trying to get to someday, to be able to compete with these guys (La Salle). Our guys were excited. They fought hard. They’ve really come together, built a nice chemistry with each other. It started in the offseason. There were a lot of injuries that these guys answered the call with. And the injuries kind of bonded these guys together.

“La Salle is so respected by us for the way they handle games from start to finish. They always do it with class and good sportsmanship, and it’s a reflection from their culture and their coaches.”