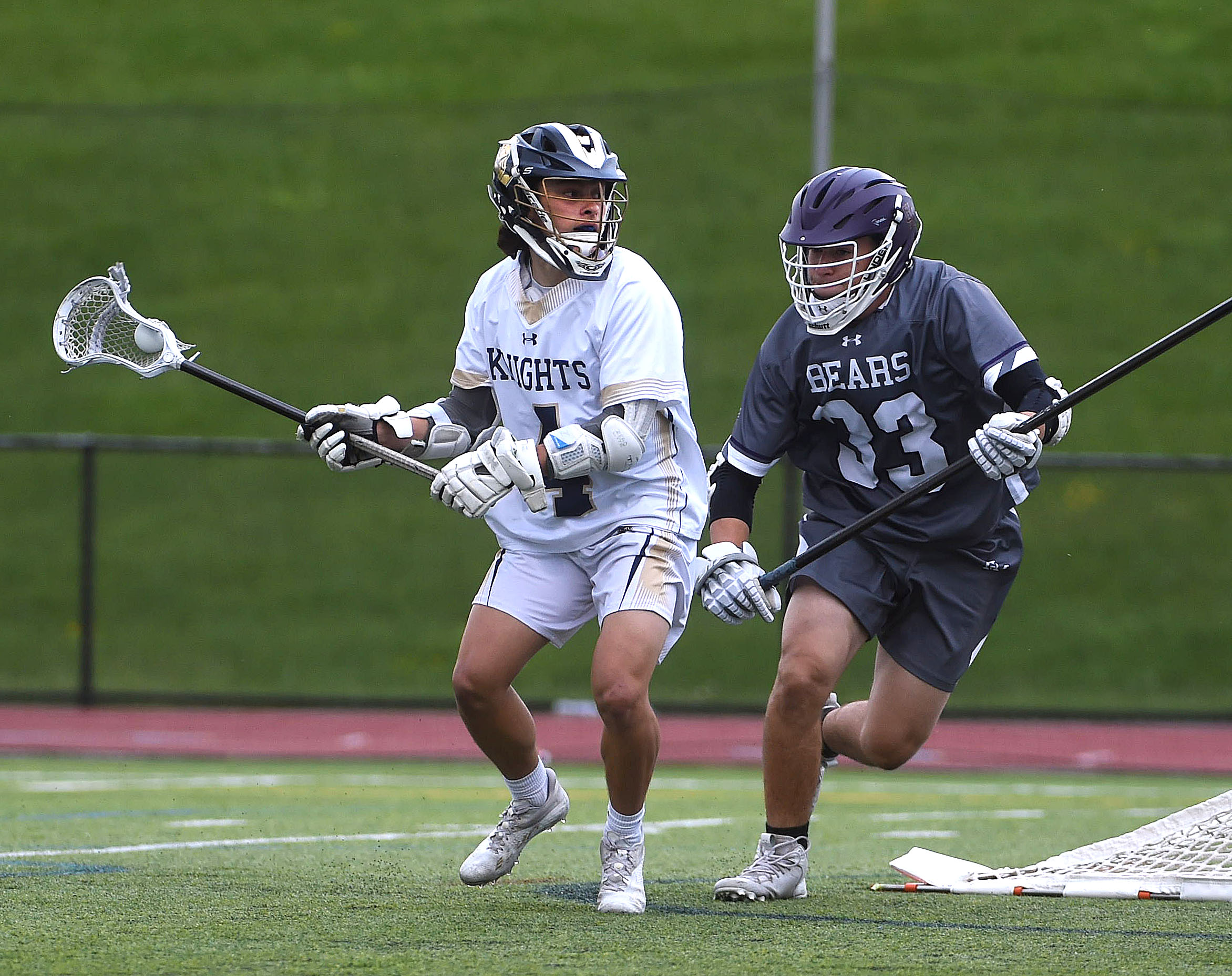 WESTTOWN >> All of the reasons that West Chester Rustin is a threat to win the District 1 2A boy’s lacrosse championship was on clear display during Wednesday’s quarterfinal action against visiting Upper Moreland.

The Golden Knights boast a vast array of snipers like juniors Marek Seaman, Jake Jackson and Antonio Santangelo, and an improving defense in front of rock-solid goalkeeper Billy Carner. And, perhaps more than anything else, Rustin is battle tested in the Ches-Mont, regularly going against some of the better 3A teams in the district.

“The last couple games of the regular season we kind of ironed some things out,” said head coach Kevin Philibin. “We are still fairly young, so our sophomores and juniors got some experience last year but this is kind of the first year of them running the show.”

Seaman and Jackson either scored or assisted on every single goal until the substitutes took over late, leading the second-seeded Knights to an impressive 14-3 victory against the seventh-seeded Golden Bears.

“Things just kind of clicked,” said Jackson, who finished with three goals and six assists. “Everyone was locked in. We knew what we had to do, and we came out and did it.”

Rustin (14-5 overall) has now won five in a row and moves on to the semifinals to host No. 3 Marple Newtown on May 24. Another Central League opponent, top-seeded Penncrest, will likely await the winner in the district final on May 26.

“In 2A, the majority of the teams are going to make the playoffs,” Philibin explained. “So we aren’t necessarily worried about seeding, it’s just go out and get as good as we can throughout the season, test ourselves against good teams, and come in ready for the playoffs.”

On Wednesday the Knights never trailed, and that’s because Jackson scored a pair of goals in the opening 2:41 of the contest. Santangelo then made it 3-0 late in the first, and then Rustin scored all three second quarter goals to take a 6-1 lead into the break.

And then Rustin turned it up another notch, seemingly scoring at will in the third and into the fourth, tacking on seven more goals in a row to make it 13-1. Working effectively from behind the cage, Jackson dished out five of his assists in the surge, and teammates like freshman Nate Pechin, sophomore Jack O’Hora, Santangelo and Seaman (twice) were on hand to finish it off.

“It’s a bunch of lacrosse rats,” Philibin said of his offensive stars. “They are best friends so they play together in the backyard.

“I think Marek (Seaman) might be the best midfielder in the entire state. Jake (Jackson), Antonio (Santangleo) and Nate (Pechin) are learning how to play off of the others and within the offense. It’s kind of turning into a nice, well-oiled machine.”

Meanwhile, the Knights’ defense allowed just one goal until the final few minutes. Carney only faced seven shots on goal.

“Our defense has been killing it. Jake Law, Drew (Lanius) and Gavin (Seaman) are defensive animals, and Billy (Carney) is just a brick wall in cage,” Jackson said.

“Our defensive coordinator, Ryan Leister, does an amazing job with the guys and he has them really dialed in,” Philibin added. “And Billy (Carney’s) been exceptional in cage. When our defense gives up decent shots, Billy is going to make a lot of saves.”

Marek Seaman finished with four goals and two assists, and Santangelo had three goals and an assist. It also looks like Rustin has found a faceoff specialist in junior Mack Thompson. Against the Bears (11-8), he won 11 of 18 in the circle.

“We came into this year without a faceoff guy. But Mack Thompson switched from midfield to faceoff in our first practice,” Philibin reported. “He said he’d been working on it in the backyard a little bit.

“In the beginning of the season, we’d win 20-30 percent, but over the last few weeks we’re now going 60-70 percent. That’s a major difference for our team.”

The Knights advanced to the 2A semifinals a year ago, but dropped a one-goal heartbreaker to Penncrest. One more win and they may get a chance for redemption.

“Last year’s playoff experience was rough, so this year is like our revenge story,” Jackson said.