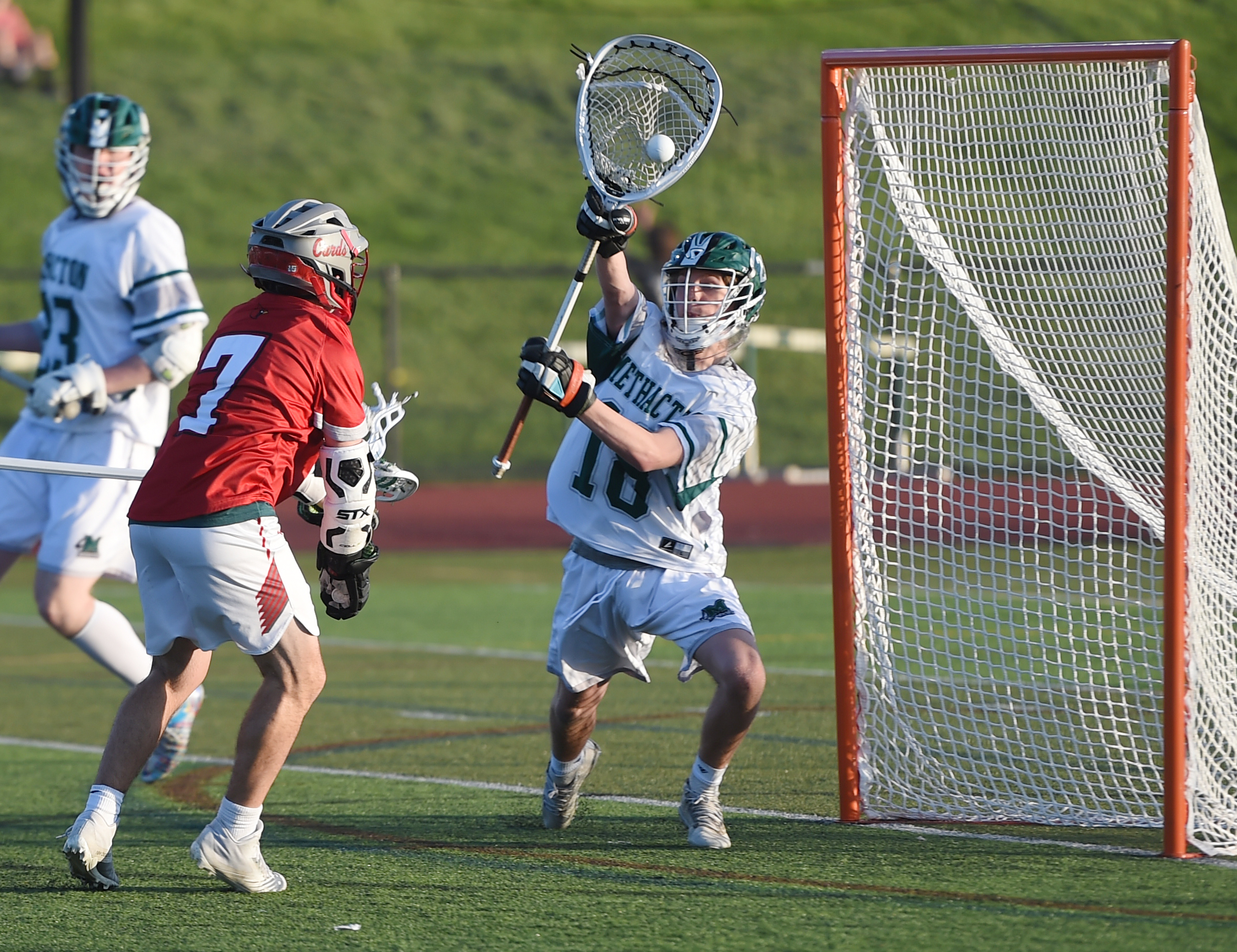 A lot can change in two years.

Hosting a District 1-3A playoff game for the second straight season Tuesday against 20th-seeded Upper Dublin, the 13th-seeded Warriors won their playoff opener for the second year in a row.

“It’s huge especially for Methacton coming off no wins at all and last year was our first one,” Seaman said. “Going back-to-back proves where our younger players have grown as leaders and coach (Matt) Saxon has grown to a better coach. Our culture is really growing here.”

.@MHS_BoysLax senior Gunnar Seaman scored his 100th career goal and sophomore Wyatt Stemler came up big in his second career start as Methacton took down Upper Dublin in the first round of the District 1-3A playoffs on Tuesday. (1/2) pic.twitter.com/7NWPG8YzsH

Seaman led the way with four goals and an assist for Methacton (12-8), while senior ViJay Foster had a hat trick for Upper Dublin (10-8).

Starting in place of injured senior Owen Avelar, Warriors’ sophomore goalie Wyatt Stemler made a difference in net with six saves — several of them of high-degree difficulty.

“I was nervous at first but once that first whistle blew, once I first touched the ball, it felt like a normal game,” Stemler said.

Coming off a loss to Kennet in its regular-season finale and a loss to Spring-Ford in the Pioneer Athletic Conference semifinals last week, Methacton wanted to start strong against Upper Dublin and did just that.

The Warriors had five different first-quarter goal scorers, including two apiece from Seaman and senior Matt D’Orsogna, to jump out to a 7-1 lead after one.

“At the beginning, we talked about bringing the energy, bringing the focus,” Seaman said. “I think since we have so many seniors we felt our backs against the wall, so we wanted to come out and have this not be our last game.

“Us scoring and just putting the ball in the back of the net early on, that was our momentum from our losing streak and feeling our pressure.”

Seaman scored his 100th career goal with 16 seconds left in the first period, part of a first-half hat trick .

“It’s amazing. It’s very relieving that I finally hit it,” Seaman said. “The last couple games I’ve been really pushing for it, and I’ve been shooting a little off.

“Starting as a freshman, I thought four years it would be hard to get 100 goals, and I did it in three, so I think looking back on it I’ve done a lot more than I’d hoped to do in my high school career so I’m happy with myself.”

Upper Durblin’s ViJay Foster (11) attempts to get past the defense of Methacton’s Cole Kleser (29) during Tuesday’s District 1-3A playoff game against Methacton. (Owen McCue – MediaNews Group)

Methacton led 10-3 at halftime and appeared on their way to an easy victory.

Upper Dublin had other ideas.

Cardinals sophomore Al Eby opened the scoring in the second half and then assisted on sophomore Kyle Spirt’s goal to pull UD within 10-5 with 5:50 left in the third quarter.

Seaman scored a minute later to quell the run, but senior Jackson Simons and senior Matt Hopper (Spirt assist) added scores to pull the Cardinals within four, 11-7, with 1:19 left in the third.

“During the first half, we didn’t play as much as a team as we did the second half,” Foster said. “The energy was just so much higher in the second half. We were fighting and we just kept pushing. We took advantage of our matchups. It wasn’t one single person, it was the whole team.”

Warriors’ senior Cam Light added a late goal in the third to keep the Methacton lead at five, 12-7, entering the fourth. However, the Cardinals’ rode their third-quarter momentum into the fourth.

Jackson Simons feeds ViJay Foster for the behind the head score. 12-10 Methacton with 1:58 left pic.twitter.com/5ynIAvZgik

“It was the small things that helped us come back in the second half,” Foster said. “The first half we weren’t communicating as much. We were just flat in general. Second half, we regrouped, took a deep breath and then we came out hot and kept building off that.”

Light’s score with a minute left in the third quarter ended up being the Warriors’ final goal of the day, so it was up to Stemler and the defense to hold on for the win.

“It was kind of nerve wracking to see the score go up and up and up, but I had trust in my team and I knew when it came down to it, we’d get that win,” said Stemler, who made a save in the final minute to help seal the victory.

Junior Will Little also added a pair of scores and assists, and senior Brody Borkowski was terrific in the face-off circle (17-of-18) for the Warriors.

Methacton will have a tall task in Springfield-Delco — the defending District 1 champion — but the Warriors are up for the challenge.

“It will be a tough matchup, but nothing we can’t handle,” Seaman said. “Our first half was great, so playing like that all the way through the fourth quarter will definitely give them a taste of how we can play.”

Along with Foster’s hat trick, Simons had two goals and two assists to lead the UD offense. Spirt added a pair of goals, and Eby chipped in a goal and two assists.

A last-ditch effort to keep their season alive just ran out of time on Tuesday.

“We faced a lot of adversity,” Foster said. “We’re missing our starting goalie, we’re missing another starting offensive player and it was just the next-man mentality. It was next person stepped up, and they played the role and it was amazing. That’s how we were able to fight.”