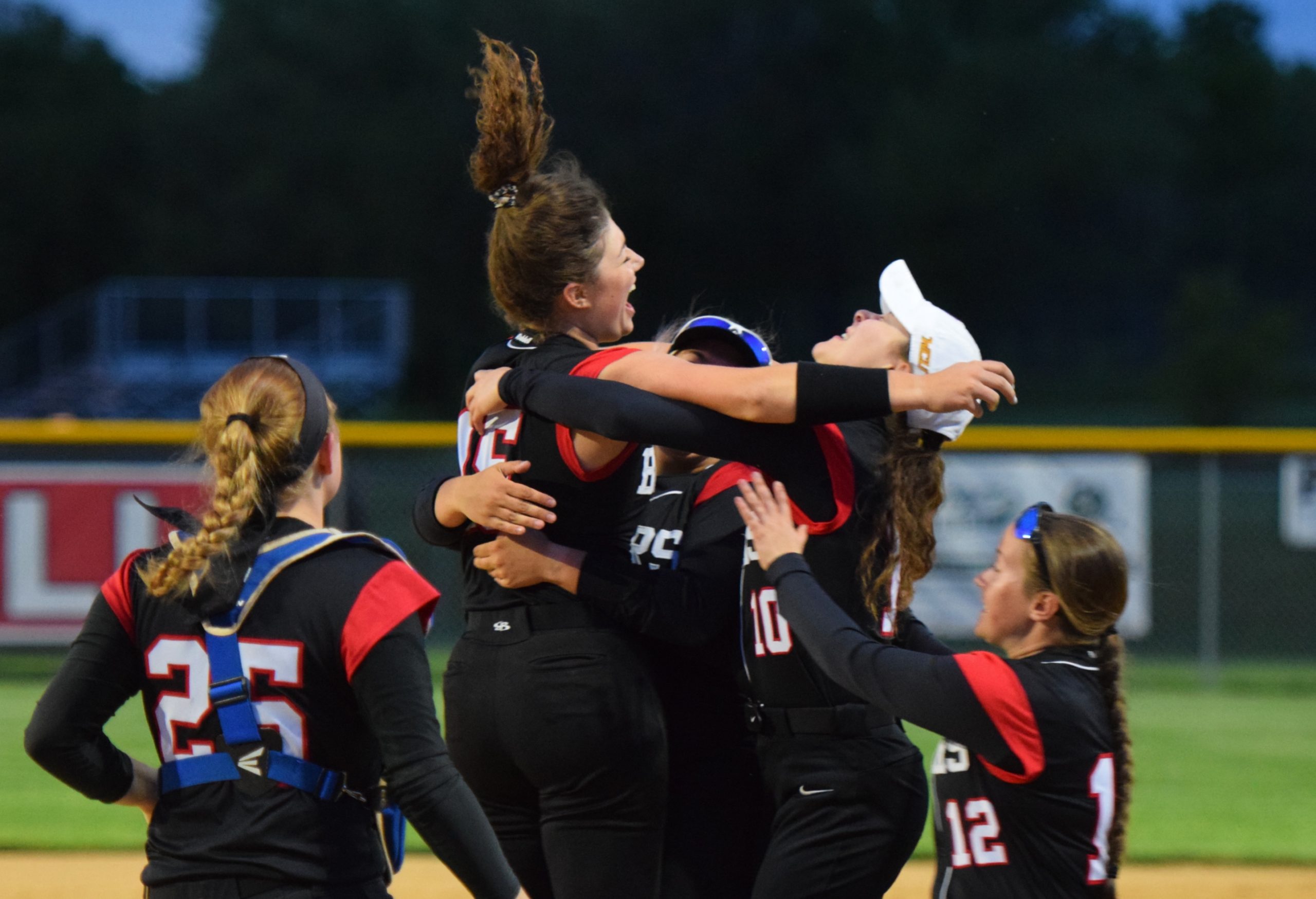 One day later, Boyertown pulled the door firmly shut behind it after prevailing over Upper Perkiomen, 2-0, in the circuit’s title game at Bear Park.

A combination of lights-out pitching by Ella Hurter, timely hits from Nicole Kratz and Kyra Neiswender and overall solid defensive play secured for the Bears (15-4) their first PAC championship since 2011.

A reserve of high-octane energy was also key to Boyertown putting up a 2-0 shutout for the second time in as many days.

“They still had high energy they brought to the game,” Kim Musselman said while savoring a first PAC title in her six-year head-coaching tenure. “We told them to keep going all game, and they did.”

Locked in a pitchers’ duel for the second day in a row — Upper Perkiomen’s Madalyn Dyer Wednesday after battling Spring-Ford’s Jules Scogna Tuesday — Hurter produced a mound gem on an equal level. The sophomore southpaw worked a one-hitter with 10 strikeouts. After 14 whiffs a day earlier her two-day total of 24 strikeouts was exactly half of opposing at-bats (48).

“All my pitches were working,” Hurter said, “but my curve really helped. I felt the team was really pumped up.”

Boyertown’s Carlee Frantz is congratulated by teammates after scoring a run during the PAC championship game Wednesday at Boyertown. (Austin Hertzog – MediaNews Group)

The scorebook will show Nicole Kratz (1-for-2, RBI) and Kyra Neiswender (2-for-3, RBI) had the run-scoring hits for Boyertown Wednesday. For the entire season, however, another factor worked to set the stage for the Bears’ title run off their current eight-game win streak.

“The team has good chemistry,” Neiswender said. “We became so close, relying on each other.”

“We saw it early on. We’re a close-knit group, which makes this even more special,” Alyx Morgan, a senior left-fielder who hit safely twice (2-for-4, run), added.

Upper Perk (13-5), playing in the PAC final for the first time since 2017, qualified for the championship off Tuesday’s 2-0 shutout of Owen J. Roberts. But its lone hit was Mackenzie Schaffer’s single to left in the fifth, and its only other baserunner was Ashley Forrest (safe on error).

“It was wide open,” UP head coach Dean Sullivan agreed. “We beat them once this year, but we didn’t have timely hitting tonight.”

Dyer’s pitching numbers were no less solid: Six hits, four strikeouts and two walks. Three of the hits came in the first inning, when Morgan (leadoff single) came around off Hurter’s grounder to third and Kratz’s RBI hit ahead of a single from Neiswender (2-for-3).

“Dyer had a great game,” Sullivan said. “But hats off to them (Boyertown).”

The Bears’ insurance run in the third was set up by Carlee Frantz’ one-out single to center. Nicole Kratz advanced her with a two-out walk before Neiswender delivered a single to left-center.

The key was jumping on her early, hitting the first good pitch,” said Neiswender.

Several inspired plays highlighted the Bear defense. To start off the fifth, catcher Rachael Moser made a sprawling catch of a Dyer foul pop. Then in the sixth, Lauren Homa made a long run to snare Erin Gray’s fast-dropping fly ball.

“The defense was solid behind Ella,” Morgan noted.

On the UP side, Sullivan praised a squad he credited with being “the loudest dugout” in the area.

“This was a fun group of kids,” he said. “I hope they learn from this.”

The Boyertown infield high-fives each other after an out against Upper Perkiomen during the PAC championship game Wednesday at Boyertown. (Austin Hertzog – MediaNews Group)

Boyertown first baseman Avery Frery throws to first base after fielding a bunt for an out during the PAC championship game Wednesday at Boyertown. (Austin Hertzog – MediaNews Group)

The next step for both teams will be to await the wrapup of the seeding meeting for the District 1 playoffs. UP ranks third in Class 5A behind West Chester Rustin and Springfield-Delco for a bracket with 12 teams while the Bears are 13th in a 24-team field in 6A.

NOTES >> Hurter citing one pivotal point in the season: “In the post-game huddle after the second Spring-Ford game (April 29, 1-0 loss). We felt we could beat anyone.” … Hurter was again praised by Musselman for an economical pitch count, 94 for the seven innings. She worked ahead of the count all night, running only one full count on the 23 batters she faced. … The game was completed in a brisk 1:24.