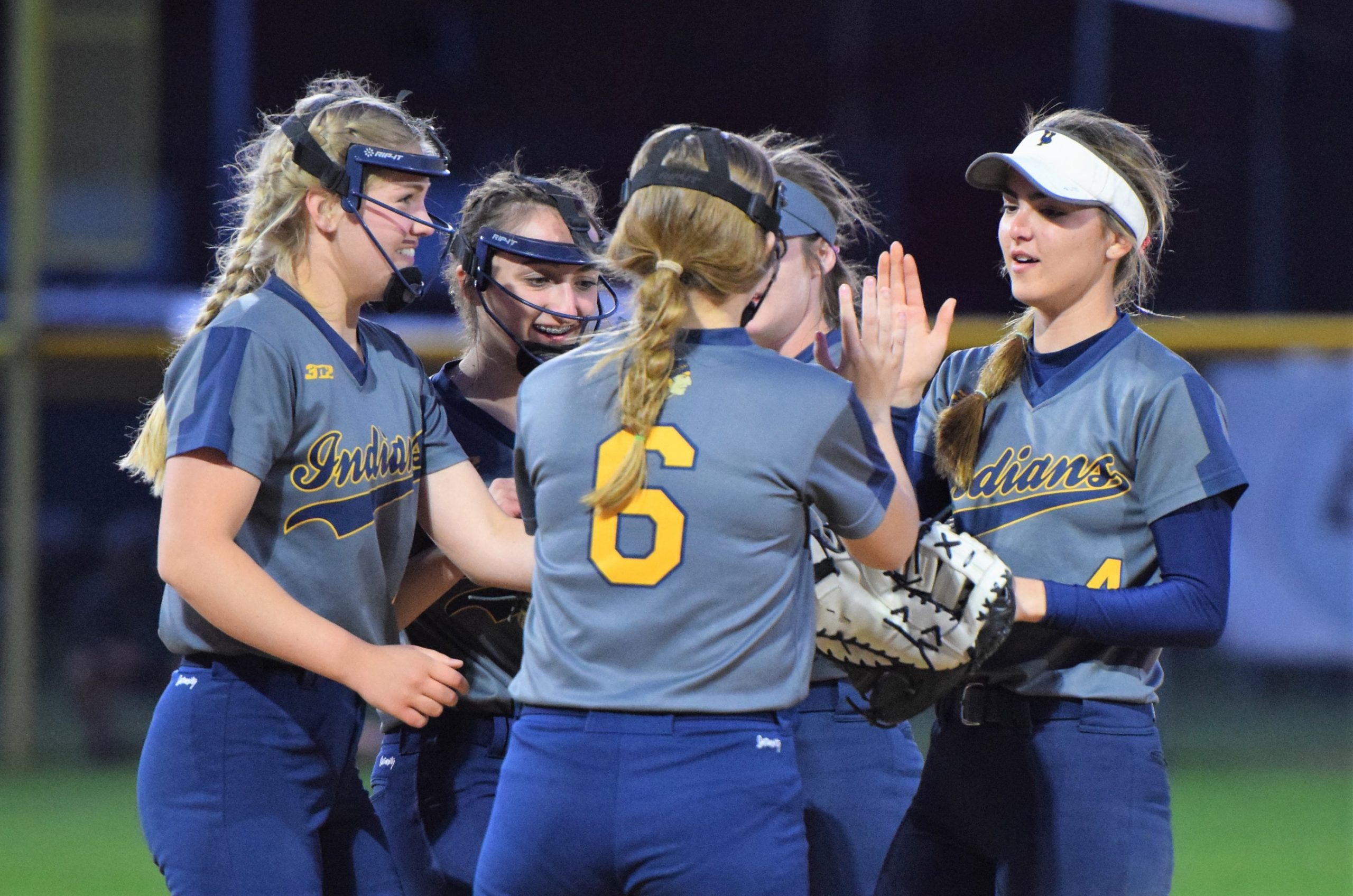 Upper Perkiomen players congratulate each other after an out in the seventh inning against OJR in a PAC semifinal Tuesday. (Austin Hertzog - MNG)

Dyer scattered five singles and walked only one while striking out six and second baseman Kylene Gooch anchored the defense by taking care of seven grounders. Nat Alldred gave up only three hits and struck out 10 for OJR, which will get a second chance at post-season action in the District 1 playoffs that begin next week.

“It’s a great opportunity,” Dyer said concerning her team’s chance for a PAC title. “It was a team effort. The team worked hard to get the job done.”
“It took a 2-0 win over a good pitcher, who dominated us the last time with 13 strikeouts,” said Upper Perk coach Dean Sullivan. “It’s a dream that I and the girls have had.”

Madalyn Dyer with a 5-hit shutout for UP to send @UPIndians to tomorrow’s championship where it will face Boyertown pic.twitter.com/NVfo3ZDP0H

The Frontier Division champion Indians, playing as the home team, scored in the first and sixth innings, with Dyer playing a key role both times.
Alldred fanned the first two batters in the opening frame. But Lynnsi Joyce lined a double to left, Dani Freer walked and Dyer beat out a grounder to short and Joyce scored on an overthrow.

Alldred set down 12 batters in a row after that before Erin Gray singled with two out in the fifth. The Indians added an insurance run in the sixth without the help of a hit when Gooch drew a leadoff walk, stole second, moved up to third on a bunt by Freer and scored on a fly to center by Dyer.

“It’s been like that all year long,” said Sullivan. “You try to put the ball in play. Errors happen. Bad throws happen.”

Upper Perkiomen second baseman Kylene Gooch throws to first base for an out against Owen J. Roberts during a PAC semifinal Tuesday at Boyertown. (Austin Hertzog – MediaNews Group)

Gooch made a diving stop to her left and accurate throw to first on the leadoff batter in the seventh Then Rachel Epps singled, but Dyer got the second out on another grounder to Gooch and wrapped up the win with a strikeout.

“We just didn’t hit,” said OJR coach Steve Winnick. “We just faced them last week and we hit. That’s why you show up. I give (Dyer) credit. Most of our hits were to the right side. She was peppering the outside corner. If we want to be successful, we’ve got to hit.”

“I think we had to hit and have solid defense,” Dyer said concerning her team’s chances to rebound after last week’s loss. “I always tried to jam their top hitters inside on their fists. It took a team effort. Kylene is a huge help on defense, and Dani too. There was definitely pressure, but we had to just focus and know what we had to do.”

Syd Campbell, Jacqui Skonieczny and Emmie Feltenberger singled in the first three innings for OJR and Sophia Winnick singled in the sixth. But the Wildcats advanced only three runners past first base and put two runners on base only once.

“She was on point,” Sullivan said concerning Dyer. “She hit all her spots. “Ashley Forrest (catcher) calls all the pitches and she did a great job. And Kylene always does a great job defensively. We’ve depended on a lot of freshmen and juniors this year. It’s been a fun ride, up and down.”

“We accomplished our goal of getting into the Final Four,” said Winnick. “Now we have to accomplish something in districts.”

Methacton holds off Upper Dublin for second District 1-3A win in 2 years
Mercury Roundup (May 17): Upper Perkiomen handles Dock in District 1-2A first round