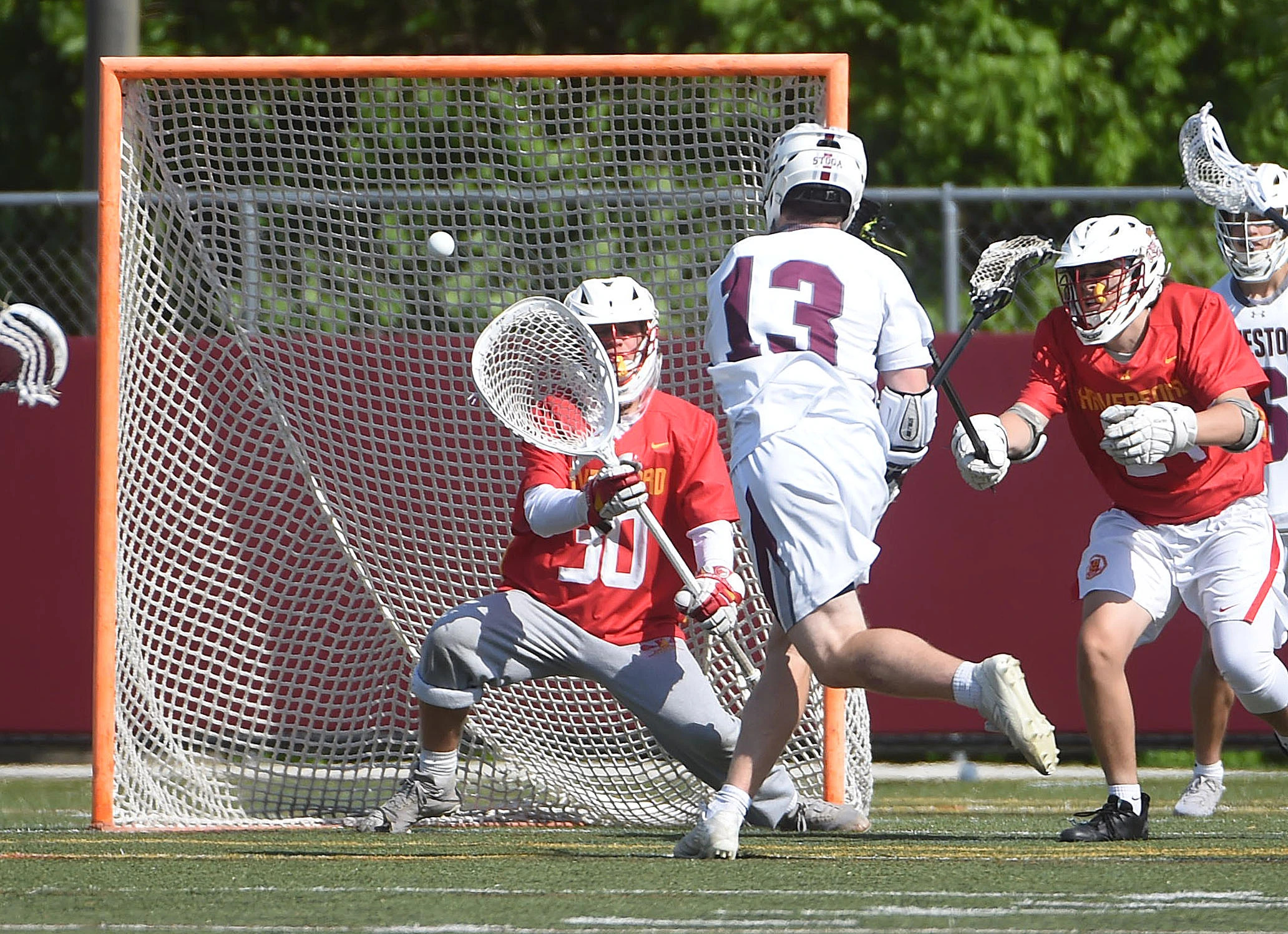 Conestoga's Patrick Reilly fires a shot past Haverford goalie Wade Devitis in the Pioneers' 15-4 victory in the opening round of the District 1 Class 3A boys lacrosse playoffs Tuesday. (Pete Bannan- MediaNews Group)

TREDYFFRIN — It wasn’t Haverford’s day, but the Fords didn’t go quietly Tuesday in the District 1 Class 3A playoffs.

Even in the fourth quarter of the 15-4 loss to talented Conestoga, one of the most formidable looking 12th seeds in the history of the districts, the Fords tallied the last two goals, Dylan Clark and Ben Devitis finishing the flurry.

Curran Kranick (one assist) and senior Quinn Carson scored the other goals for the Fords, who were powerless against Pioneers star attack Patrick Reilly, who had six goals and one assist. “It’s tough to come up against the buzzsaw that is the Central League and Conestoga,” Fords coach Bryan Arra said. “That’s a really good lacrosse team. They’re really well coached. They’re battle tested. I wish them the best of luck.”

The Pioneers (11-7) play at fifth-seeded Perkiomen Valley, which had a bye, in the second round of the playoffs Thursday. The Vikings (14-3) defeated the Pioneers, 14-9, earlier this season.

It’s safe to say the Pioneers, coached by former Penncrest lacrosse All-American Brody Bush, have a chip on their shoulder. After all, they’ve made four straight trips to the state semis.

“We’re a team that usually likes to win the Central League,” Reilly said. “This has been an on and off year for us. We’ve had one of our best players out the whole year for us. So, we really just want to go all out in the playoffs. Next round we have Perk Valley, who beat us. We just really want to be prepared for that. Obviously, it’s a very good team.”

The Pioneers burst out of the gate in a hurry Tuesday, although in the first 3½ minutes they couldn’t solve Fords freshman goalie Wade Devitis, who made three point-blank saves, finishing with six on the day.

But the deluge began with a Reilly goal 2:34 into the contest. Seven seconds later Ian Kim won the draw and exploded up the boulevard to make it 2-love. Kim has scored off the opening faceoff so many times this season that Bush lost count at 10.

“He’s been fantastic for us all year,” Bush said. “He sets the tone.” Conestoga’s Ian Kim, left, pushes past Haverford’s Colin Kane off a faceoff Tuesday in the opener of the District 1 Class 3A boys lacrosse tournament, a 15-4 win for Conestoga. (Pete Bannan/MediaNews Group)

Reilly scored two more goals to stake the Pioneers to a 7-1 lead entering the second period, one with 11 ticks left in the frame.

In the second quarter Chase Kelly scored two goals in the final 29 seconds, giving the Pioneers a total of four goals with 30 seconds or less remaining in each of the first two quarters.

It was too much for Carson and the senior-laden Fords to overcome.

“It was a tough game,” Carson said. “We stuck to our system all the way through. We played the right way. But that’s a good team. What I’ll remember about this year is we had a bunch of great guys and the coaches taught us to play the right way. Great guys and I’ll miss them all.”

After the game, Carson waited for Arra to get free and gave him a hug. The coach is going to miss the upperclassmen.

“What a year we had,” Arra said. “We won three lacrosse games last year. We won nine this year. We tripled our wins. It’s a tribute to the seniors and the amount of time they put in this season.”