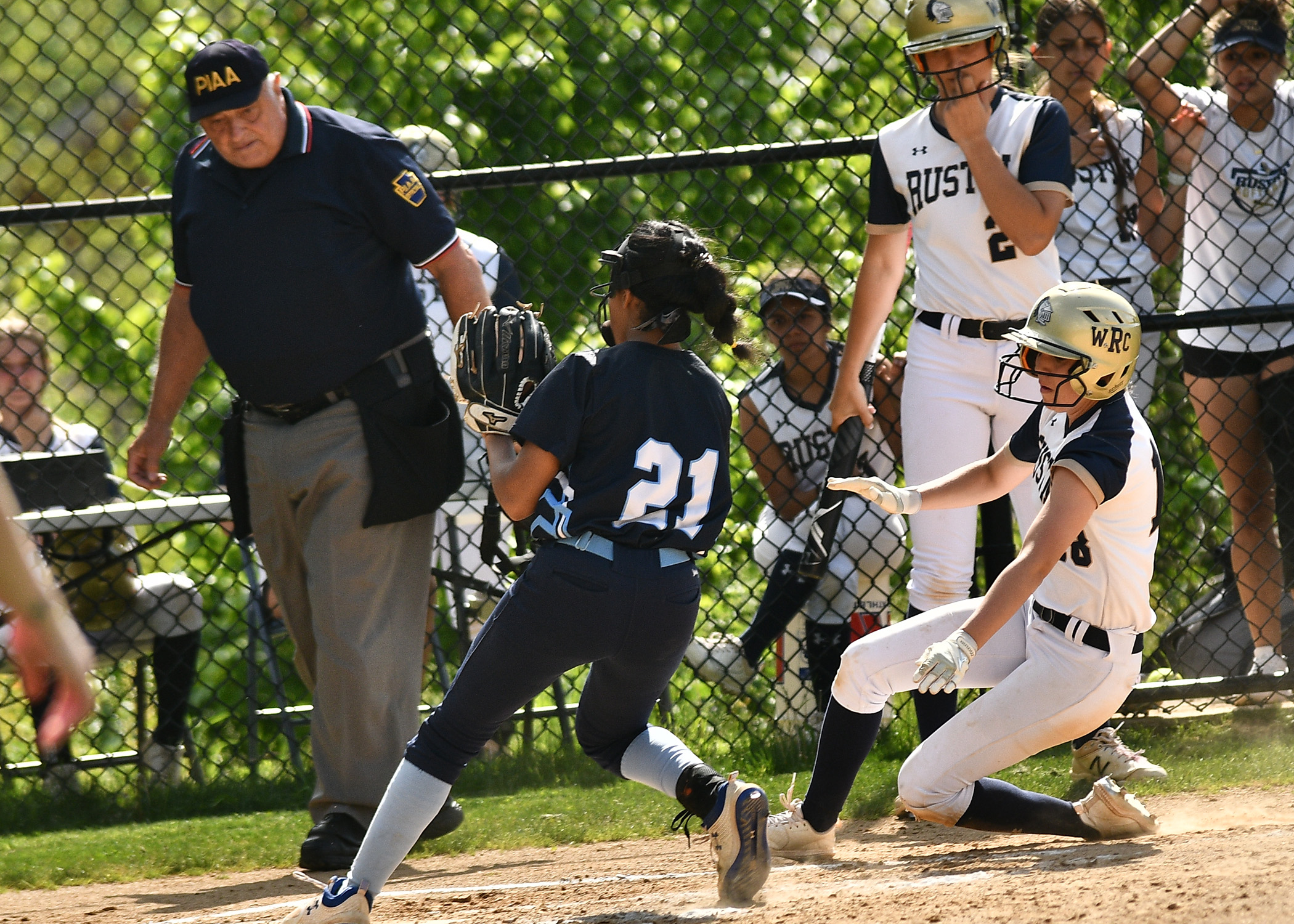 WESTTOWN>>On paper, Tuesday’s non-league softball match-up between Rustin and visiting Villa Maria didn’t figure to be much of a game. Ches-Mont American champ Rustin was holding down the one-seed in the District 1, class 5A tourney with a 15-2 record, while Villa Maria was barely at .500 for the season. But the game turned out to be a doozy.
A full three hours and eight innings after the first pitch, and after the Hurricanes claimed the lead on four different occasions, Kelly Fricker broke a 12-12 tie in the bottom of the eighth with a grand slam, giving Rustin (16-2) the victory over a game Villa Maria (8-9) squad by a score of 16-12.

“Villa came out here today and really brought the energy,” said Rustin coach Dennis Becker. “They just kept scoring and pushing us. But there’s no quit in this Rustin team. But even with the four-run deficit in the bottom of the seventh, I saw in their faces the determination and confidence that they could come back.”
After putting up five runs over the sixth and seventh innings, the Hurricanes had Rustin in a deep hole, holding a four run lead, 11-7, as the Golden Knights came up for their final at bat of regulation.
Giana Lupo (2-3, 2R) got things going in the seventh, working a one-out walk. Gina Delgiorno (3-4, 4R, SB) followed with a single to bring up Fricker (6-6, HR, 2 2B, 3 R, 6RBI), who delivered an RBI single to plate Lupo and cut the lead to 3. After Delgiorno scored on a wild pitch, Mairaid Hopkins and Paige Bentley connected on back-to-back singles to send the game to extra innings.

Villa once again grabbed the lead. Alex Kilpatrick, who came into the game as a pinch hitter in the fifth, and delivered an RBI double, came through once again, hitting a solo home run over the right field fence to put the Hurricanes up by one.

“Alex has come through for us more than once this year,” said Villa coach Nikki Hartshorn. “She hit a big, seventh-inning home run against Gwynedd, too. She’ll pitch when needed. She does anything we ask of her.”
Lacey Laney led off for the Knights in the eighth, and worked a walk. Emily Gillis and Lupo followed with singles to load the bases, with Delgiorno picking up an RBI with a walk to tie the game at 12 apiece.
Fricker came up—still with no one out—just looking to make good contact. And make contact she did, driving a ball over the fence in right center for a grand slam.
“I knew that no matter what I did, we were going to be OK,” said Fricker, who also threw out a runner at home in the game. “I knew the girls behind me would have my back if I came up short. So I wasn’t feeling too much pressure. But I felt really good today.”
Fricker coming through came as no surprise to Becker.
“She had a hitting streak snapped against West earlier in the year, and it really served as motivation,” said Becker. “After everyone leaves, she’ll be here working on her hitting. She’s just s special player.”
Despite the loss, the Hurricanes can take a lot of positives from this game as they head into the post season. They had fifteen hits, and put up 12 runs against one of the top teams in District 1. Five different players posted multi-hit games, and every player on the roster got into the game and made a contribution.
“I’m so very proud of this team,” said Hartshorn. “We’re raising the bar every time out. We put up that many runs on the top seed in the division above us, and it was a total team effort. We’re feeling really good about ourselves heading into the district tournament. Right now we hold the three seed in class 4A, and we know we can play with anyone.”
Rustin, meanwhile, solidified their hold on the top seed in class 5A, and showed their mettle in the face of a serious challenge.
“We’ve faced some challenges over the course of the year, and we’ve handled them well,” said Fricker. “But it’s good to be challenged as we head into the post-season. We’re looking forward to it.”