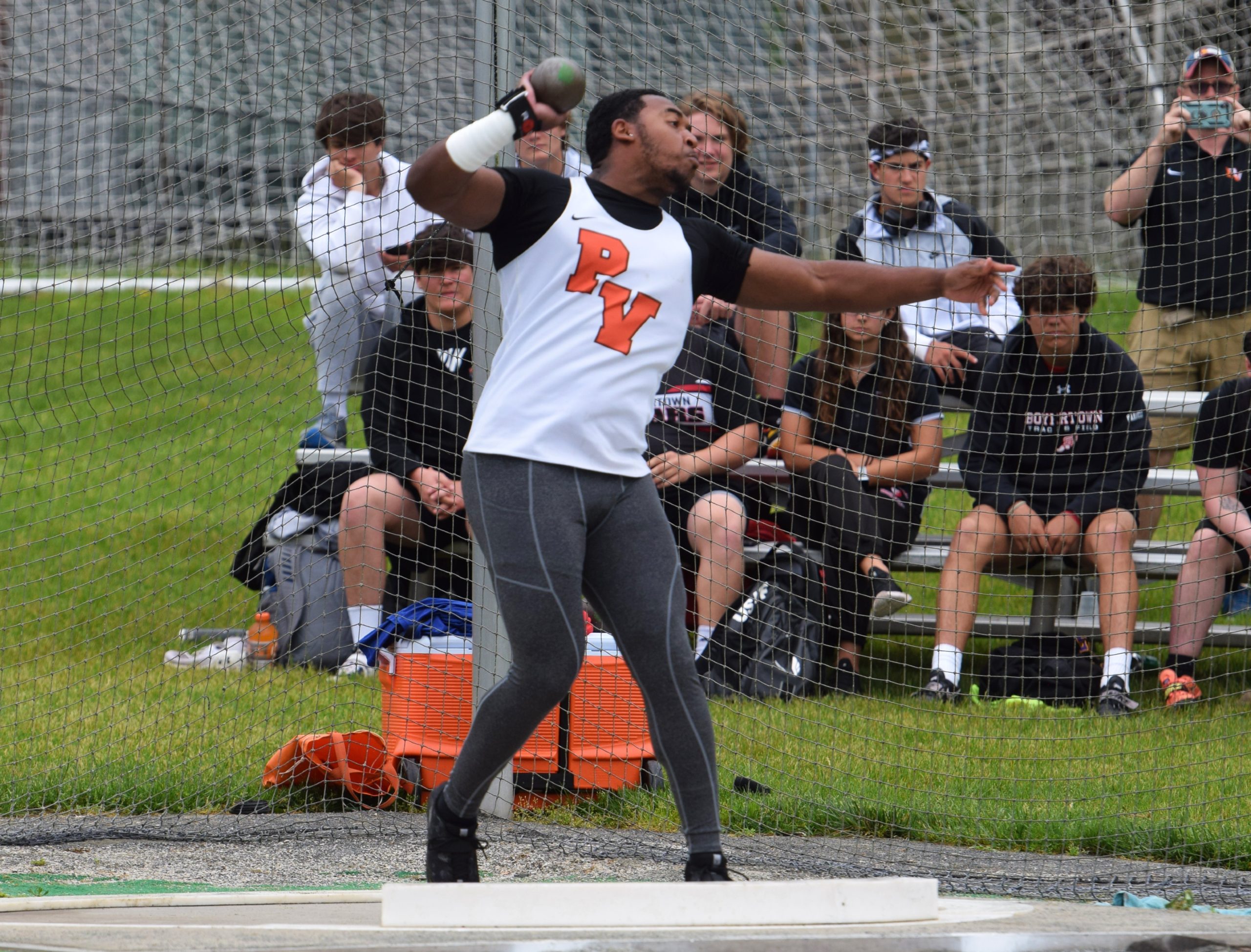 WEST NORRITON >> There are different ways to illustrate the passage of time since the last Pioneer Athletic Conference Track and Field Championships back in 2019.

When the event last left off, Perkiomen Valley freshman Ronde Washington didn’t have a place in the field.

“When I started out as a freshman, I was throwing 25 feet,” Washington recalled.

Washington’s winning throw in the shot put of 60-6 was a meet record to highlight Saturday’s boys action at the PAC Championships at Norristown.

The Viking senior prevailed over Boyertown’s Jayden Miller in a two-horse race where they were the only competitors to throw in excess of 50 feet. Washington’s record throw came after four attempts ranging between 56 and 58 feet, a 58-2 recorded on his second try.

“When I moved through the circle, I felt more powerful and faster,” Washington said. “I started to scream when I let it go.”

Qualifying for Nationals later this year, he sees longer throws in his future.

Methacton’s team title — one matched by its female counterparts — owed much to the double-win performances of Vaughn Lackman and Zachary Willen. They each won two races, Lackman heading the 800 and 1,600 while Willen took the 400 and 200.

Lackman started off with a 4:18.45 run in the 1,600, heading Owen J’s Thomas Damiani and Methacton teammate Bryan Landsberg. He had a two-second advantage on Damiani at the finish line.

“It was good to be first the whole time,” he said. “I knew Damiani was going to be behind me. I expected it to be us two, and it seemed to be.”

He later clocked a personal-record 1:57.57 in the 800 to edge out OJR’s duo of Nathan Hayes and Thomas Damiani, a respective 2 and 3 within a two-second span. He had been running third until the 300-meter mark, when he put on a “big move.”

“Hayes was on my shoulder until there was 125 left,” he recalled. “I dug deep and beat him across the line.”

“My best splits were 48.04,” he said. “In the back stretch, I could see Daunte running third. I was on the outside, and I was running well all the time.”

Combined with a win by its 4×800 relay (8:21.04) and other Top Three finishes, it got Methacton the boys’ PAC championship plaque with enough of a point margin to make the 4×400 relay a minimal factor in the meet’s final outcome.

“I’m thankful there was no pressure hinging on the race,” first-year head coach Christopher Torpey said. “Spring-Ford is a great team, well-coached and competitive.

“Those guys are rock stars,” he added in reference to Lackman and Willen. “But we had points all-around.”

The Warriors’ success prevailed against a number of injury issues that required repositioning competitors.

“We’ve told them if one falls down, others have to rally round,” Torpey said. “We wanted to win the PAC as a team and be competitive for districts.”

POLE POSITION >> The joy in Alex Teufel’s voice, and his body gestures, could be detected a mile away.

Having secured the gold medal in the boys’ pole vault after a total seven runs Saturday, Teufel was shooting to — no pun intended — raise the bar on his final finish. He did that in fine style, first reaching the district qualifying mark of 13 feet, then clearing the bar at 14 feet.

The shout of joy, the arm flexes … it’s all part of the persona of an athlete praised by his coaches as having “a motor that never stops.” It’s also helping Teufel come back from a couple medical issues this year, including a broken collarbone playing volleyball in the winter, and reach his previous level of performance.

Upper Perkiomen’s Daniel Carpenter was second at 11-6, and Perkiomen Valley’s Kevin Bonner a close third at 11-3.

There was also the opportunity for Teufel to work on the “six-lift” (12-step) run to the crossbar. It was a factor in him reaching 13-6 on his eighth run, then 14-0 the next time before missing at a personal-record 14-8.

Teufel’s day was not over at that point, however. He joined the Ram boys’ 4×400 relay for the first leg of a race that saw them place fourth, little more than a second behind eventual team champion Methacton to their runner-up effort. He also had the school’s prom to attend that night.

Add to that an injury-prevention regimen marked by him running cool-down laps while the team champions were announced and the meet was winding to its end.

“I feel good,” Washington, a sophomore, said. “I’ve been trying to work on my start for the whole season. I felt really good at the start. I feel like I’m good in between the hurdles so I just have to focus on my start.

“I’ve wanted to go against Trevon (Foster) for a long time. It was good. He really pushed me, it was really good competition.”

Washington is now setting his sights on marks held by former teammate Darius Smallwood and current head coach Justin Gibbs — he won a bronze medal in the 110s at the 2003 state meet.

NOTES >> Owen J. Roberts won the marquee 4×400 relay, running a district-qualifying time of 3:25.67 to beat out runner-up Perk Valley (3:30.84). … An interesting matchup in the 4×4’s first leg saw individual-event champions Lackman and Teufel running for Methacton and Spring-Ford, respectively. In prelude to the finish, Lackman outran Teufel on the leg. … The top three finishers got medals while the top eight were announced.