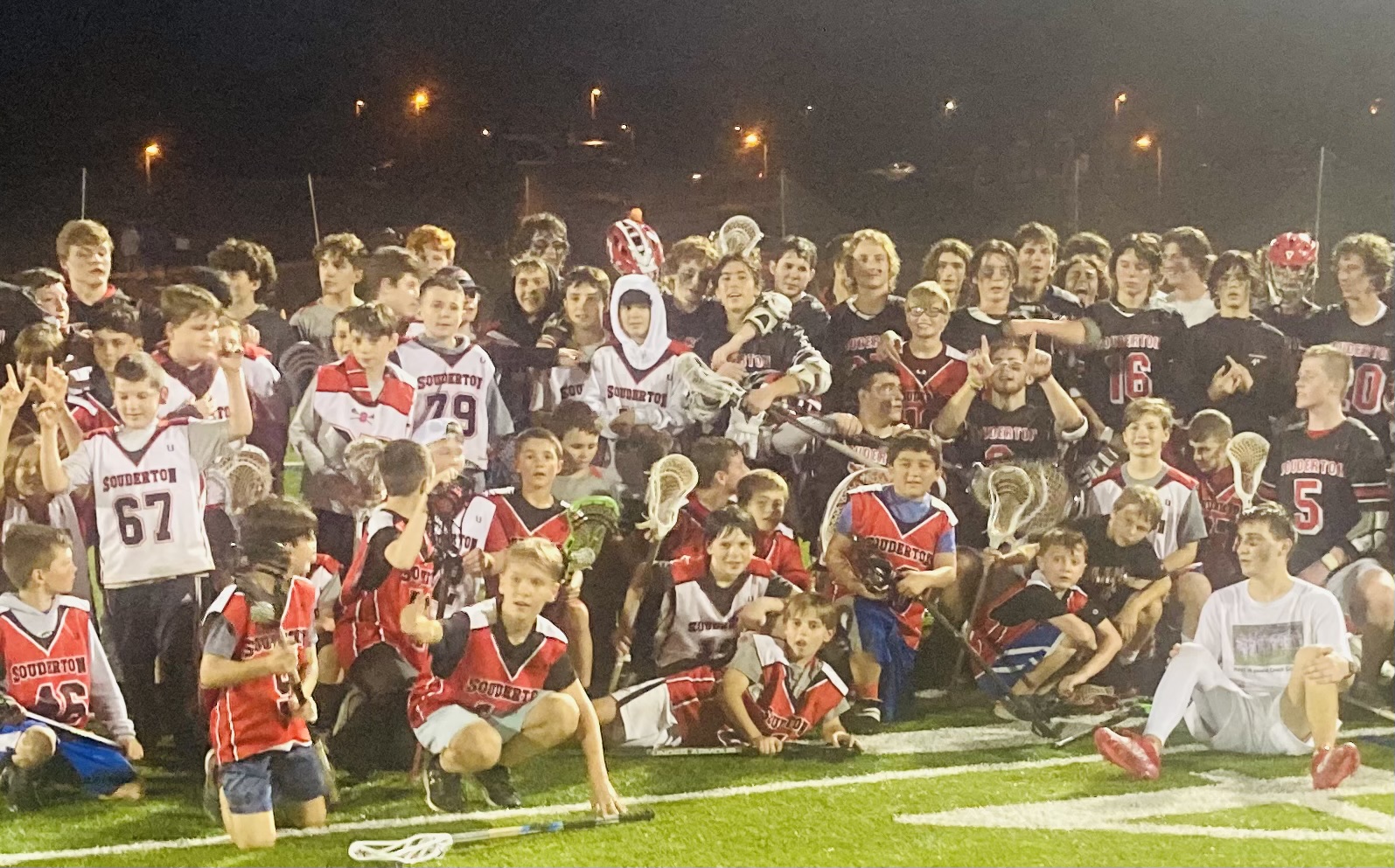 Souderton's varsity and its youth players get together on the turf after Friday's battle with Lansdale Catholic on May 13, 2022. Kev Hunter/MediaNews Group)

FRANCONIA >> With just 51 seconds left, John Martin Vince twisted and turned his way to the go-ahead goal that capped a rousing comeback for the Souderton boys lacrosse team Friday night in a spirited battle with non-league rival Lansdale Catholic.

“That’s what you dream of every night. You think to yourself, I wanna get that game-winning goal,” said a smiling Vince afterwards. “I saw my matchup, took it, and put it in the back of the net.”

Big Red prevailed 8-7 in a contest between two area powers prepping for what they hope is a long postseason.

“This gives us great momentum going into the playoffs,” said Vince, who scored a hat trick for the Indians. “It feels good to beat (Mark) Princehorn – a great coach, coming back to Souderton.”

John Martin Vince scored the game-winning goal for Souderton in a victory over LC on Friday, May 13, 2022. Kev Hunter, MediaNews.

Princehorn laid a tremendous foundation for success in his days coaching Souderton and guided the team to its first ever district playoff win. He now has LC playing at a high level, and the Crusaders were on the doorstep of victory Friday night.

Souderton jumped out 2-0 but then LC scored four unanswered and was ahead 4-2 in the second quarter.

Big Red pulled even by the half.

Again, the Crusaders pushed ahead and had a 6-4 lead and later led 7-5 in the fourth.

But Big Red had enough left for a furious rally.

“That was awesome. We were down the whole game, came back in the last five minutes,” said Vince. “Seth Grossman got us going with that tying goal and then Shawn Martin won the faceoff.”

Souderton controlled the ball for the final minutes until a pass found Vince behind the corner of the net. He rolled out in front, maneuvered his way to an opening and fired the winning shot.

Lansdale Catholic players watch from the sideline during the battle with Souderton on Friday, May 13, 2022. Kev Hunter, MediaNews.

Jamison McDivitt and Grossman scored twice for Souderton. Connor Mann and Mikey Kleinert did the same for the Crusaders.

“I can’t be more proud of the way the team banded together for the last three goals,” said Hunsberger. “That’s all you can ask for is toughness and grit. I’m glad they brought it.”

Martin gained control of the ball one last time and Souderton drained most of the remaining clock. LC had one last chance but the Big Red defense didn’t allow a shot.

“We were just looking to finish off strong with our tough mentality going into playoffs, and really start to prepare for Tuesday,” Hunsberger said of the win.

Souderton raised its overall record to 14-3, having finished 8-2 and second in the SOL National. Big Red now gets ready for the District 1-3A Playoffs on Tuesday.

Lansdale Catholic huddles during its game with Souderton on Friday, May 13, 2022. Kev Hunter, MediaNews.

LC faces The Perkiomen School Saturday and then prepares for the Philadelphia Catholic League Playoffs and then will look to defend its District 12-2A Title.

Said Princehorn: “I think that we have a very talented team and I think we can make a serious run. A lot of the goals we set at the beginning of the year surround the playoffs.”