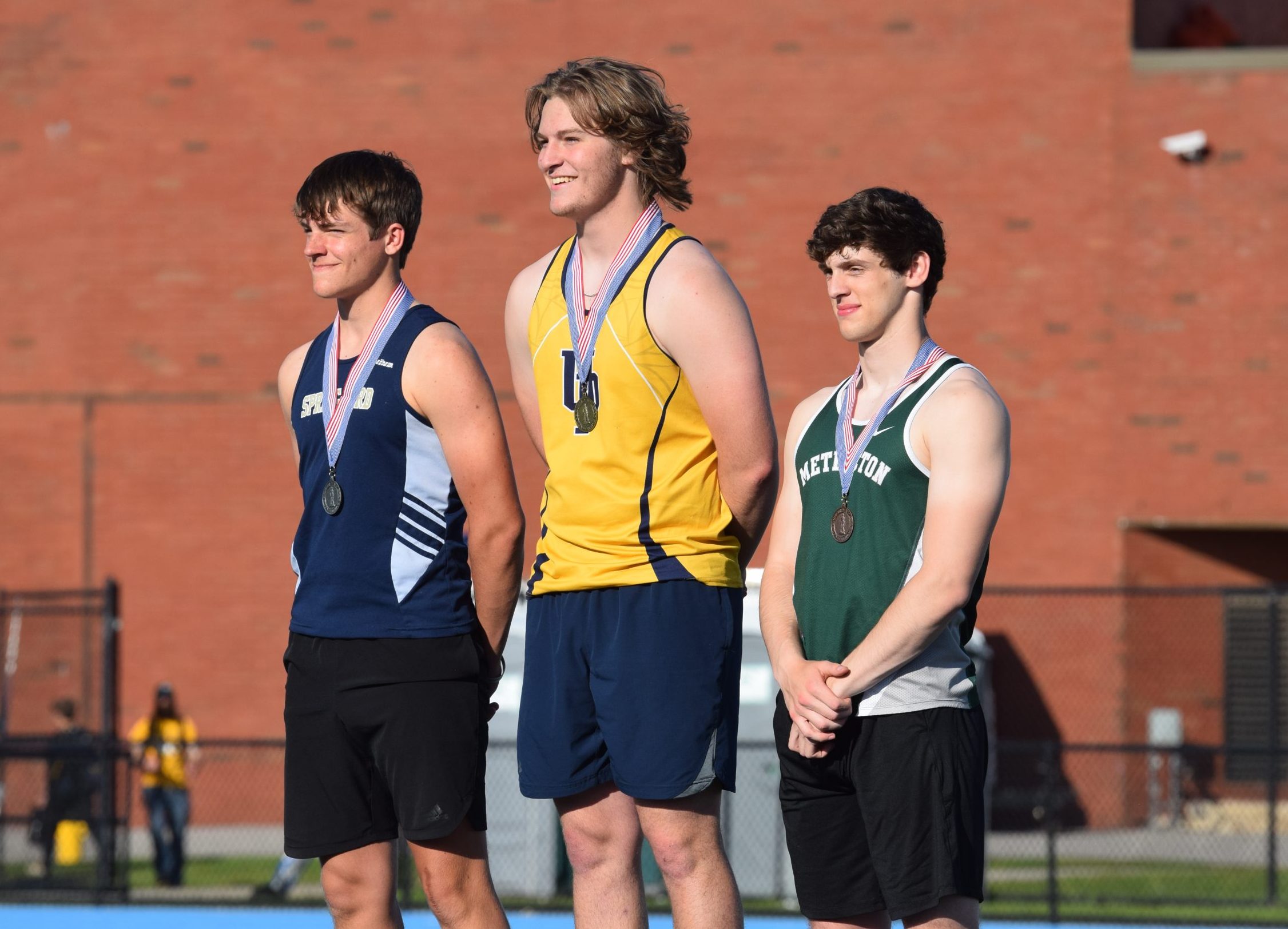 The Pioneer Athletic Conference Track and Field Championships have been missing from the spring calendar since 2019.

They’re back in 2022 after a two-year COVID-related hiatus. To mark the occasion, although not by original design, they’re a three-day event.

With Saturday afternoon’s field events moved up Thursday, those athletes didn’t mind the early start. They had the sunny, high 70-degree weather every track and field athletes longs for.

Methacton senior Kaitlin Richards went her version of ‘long’ by going highest in the girls’ pole vault. She cleared 10-10 as her top height, 10 inches better than runner-up Samantha Pedrick of Upper Perkiomen.

Flud was in winning position from start to finish after opening with a 166-2 but saved his best for last, winning the event with a 172-4 on his final throw.

“I’m happy I won. I would have liked to throw better and PR, but I threw well and took first and to throw my best on my last throw of the day was a nice sentiment that I was able to keep getting better,” Flud said.

Flud placed 14th at the PIAA Championships in 2021, quite an achievement in his first year competing in the sport.

PACs are the first postseason step to reaching where he hopes to be in two weeks: the podium at Shippensburg University on Memorial Day weekend.

“I’m happy with what I’ve achieved, but I’m not satisfied. I want to go and leave states with a medal. This is the first step to that states medal,” Flud said.

Just like Flud impressed as a rookie, so has Spring-Ford’s Pytel. The baseball player-turned-track and field athlete only first gave the javelin a try at the end of the 2021 season.

He raised eyebrows early in the spring throwing in the high 170s – his seed mark was 178-5 – but a lingering elbow injury has hindered him from those distances of late. Still, he reached 164-0 to score silver.

Unfortunately for Pytel, he’s no stranger to injuries.

He stopped playing baseball early in high school in part due to separated growth plates in his throwing elbow. As a sophomore, a tumor was discovered in his knee which required surgery.

“After knee surgery I was doing track last year to get back into running shape. At the end of the season I thought, ‘I came from baseball, why not throw?’ It comes natural,” Pytel said.

Despite being below 100 percent, it’s hard to be upset with a podium finish in his first PAC Championships.

“I have great coaching: Mr. (Steven) Entenman – I have him in class – he’s been very supportive and helped me all winter and Bryn Callan (assistant coach and 2013 S-F grad who threw javelin in college at Widener) – she’s a nurse so she’s been helping me rehab and fixing my form to throw more with my shoulder to put less stress on my elbow.”

PV junior Meehan also had the win in hand from his first attempt, a 21-1 3/4 besting the field. Methacton’s Owen Li took second with a 20-1 and Owen J. Roberts freshman Gabe Lagrossa was third with a 19-11 1/4.

“The first one felt nice. That was a good jump, my fourth 21-1 of the season,” said Meehan. “Being there again is pretty good. I felt like the sixth (jump) was probably further but (it was narrowly a foul) … I aim more to stay consistent throughout the six jumps than to have one that’s really high and the rest low.”

One of the few reigning champions dating back to the 2019 league meet was in the field – Spring-Ford senior Dean Wright – but the Rams’ jumper did not compete.

Meehan wasn’t complaining about the amended schedule, happy to compete on a day with favorable weather.

“I was fine with it,” Meehan said of the adjusted schedule. “I was more concerned with the weather since it’s a high chance of rain Friday and Saturday. I preferred this more than tomorrow for just an extra day to prepare. I’ve been ready for this.

“Every time I get nice weather I try to turn up the heat a little, get more distance out of my jumps. (Good weather helps) the mindset. When it’s cold and rainy I don’t feel I’m able to go as far. When it’s hot and warm, I know there’s that ability to go and PR every time I’m out there.”

Ester Mokonchu nabbed the first of what expects to be multiple PAC titles for her family (twin sister Nene is the top seed and Pa. No. 1 high jumper who competes in her specialty Friday). She threw a season-best 39-1 1/4 on her first throw to win the shot put. Boyertown’s Alexandra Benson exceeded her sixth seed and threw a 36-9 3/4 to place second. Pope John Paul II freshman Maeve Gallagher took third with a 36-3.

The PAC Championships continue Friday and Saturday at Norristown. Full event information is available at MileSplit, including live results.