Pennridge walks off on Senior Night 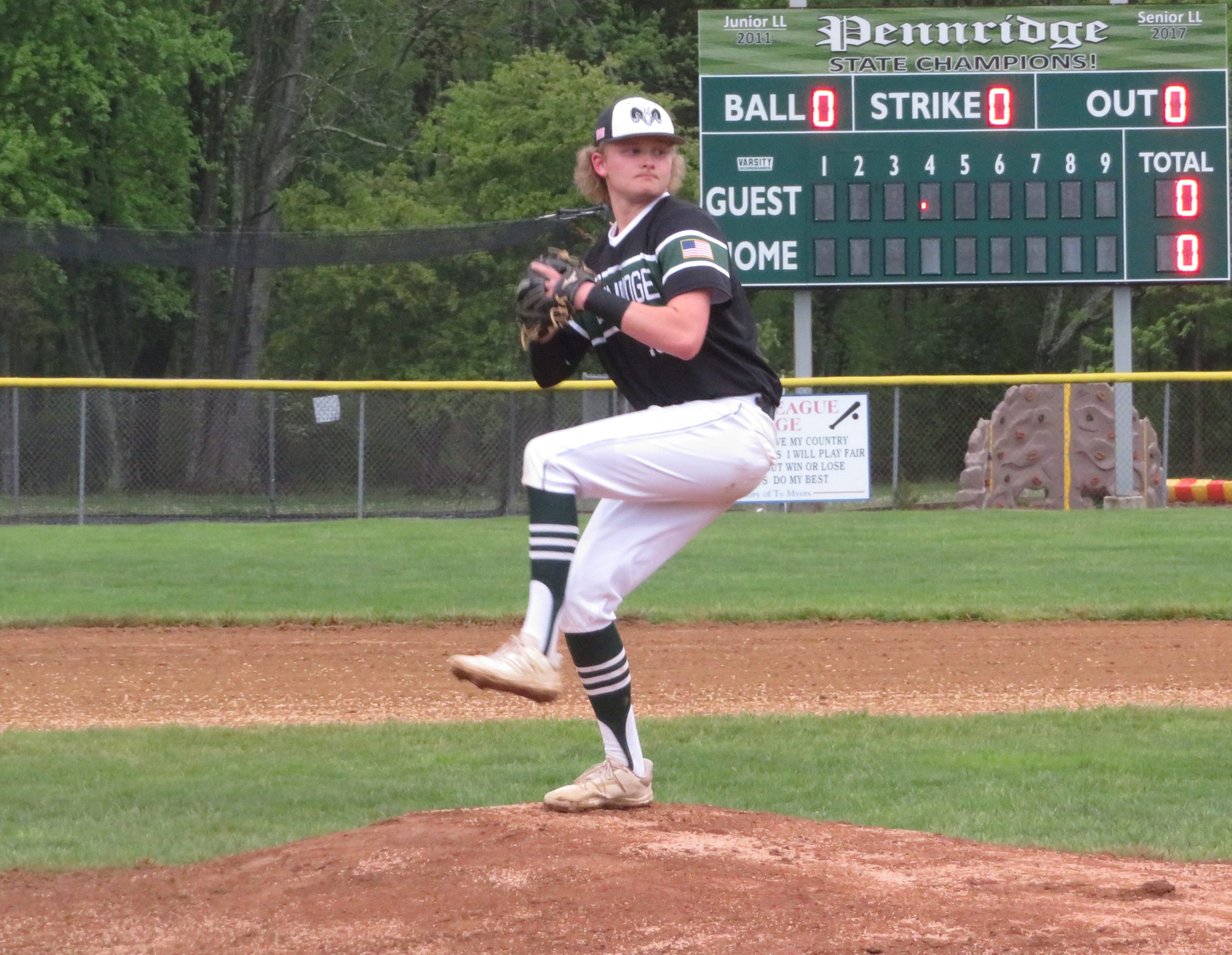 The Rams stepped to the plate trailing by one run in the bottom of the seventh inning Friday night at James Memorial Park. After back-to-back walks to start the inning, Conor Flyn tied the game with an RBI single to center field. Two batters later, Robbie Pliszka singled past a diving Abington infielder to knock in the game-winning run and lift Pennridge to a 9-8 non-league win over the Ghosts.

“I was confident,” Pliszka, who went 2-for-5 with three RBIs, said. “Right before the pitch I said, ‘just like wiffle ball.’ I smacked it just like backyard wiffle ball. It was a great pitch, saw what we needed and got the job done. Couldn’t be more proud of these boys. Came back down one in the last inning. Unbelievable fight.

“Senior Night — it’s a great night. It felt special to walk it off this way. I’m glad we were able to do that. That’s a perfect, storybook ending.”

Jaden Morgan played a big role throughout the game in the Rams win, going 2-for-2 with two walks, four runs and two RBI. He made key plays on the basepaths, including scoring a go-ahead run in the bottom of the fifth on a ball hit back to the pitcher and stealing second in the bottom of the seventh to put the tying run in scoring position.

“I value base-running a lot,” Morgan, who swiped two bags and advanced on two wild pitches, said. “Any little sneaky bag you can grab is really huge. From first to second, that’s going from no scoring position to scoring position. That’s pretty huge — any gapped ball I’m stealing home. It’s important to get good jumps on steals. People don’t really value it as I think they should.”

Morgan also had the hit of the game, a two-run home run to left-center field to give the Rams a 5-0 lead in the bottom of the third inning.

“I’ve been struggling a little bit getting the bat out in front,” he said. “I just wanted to see one middle-inside and do what I do – hit it over the fence. I was seeing the ball very well tonight. It felt good off the barrel.”

Pennridge built a 6-0 lead after three innings. Reese Wolfgang worked a bases loaded walk in the bottom of the second to make it 1-0 before Pliszka hit a two-run single to extend the lead to 3-0. After Morgan’s two-run blast in the third, Ryan DeHaven walked, stole second and scored on a Harry Haeflein single to make it a 6-0 lead.

In the top of the fifth inning, Abington got all six runs back. Jared Biletz hit an RBI single before a run scored on an error. Johnny Dzielawa hit a two-run double and two more runs crossed the plate on an error to tie the game, 6-6.

“We’ve been coming back from behind the whole year,” Abington junior Alex Dardaris said. “It’s nothing new to us. We just chipped away, got after it with two outs and got the job done in that moment.”

Morgan made it 7-6 Pennridge in the bottom of the fifth. He singled, advanced to second on a grounder to shortstop, moved to third on a wild pitch and scored on Wolfgang’s groundout to the pitcher.

Abington was patient at the plate in the top of the seventh to tie the game and take an 8-7 lead. The first four batters walked, with Dzielawa’s base on balls forcing in the tying run. After a pair of strikeouts, Biletz scored on a wild pitch to give the Ghosts their first lead of the game.

“We use our approach,” Dardaris, who led off the seventh with a walk and scored the tying run, said. “We get to see a lot of pitches, work walks, work counts and that works for us, especially when it’s raining out because (the pitcher) can’t get a grip, but it went both ways.”

During the Senior Night festivities, Pennridge’s Quinn Keller was introduced along with his favorite baseball memory — “Throwing my first no-hitter.”

It turns out the senior wasn’t looking back on his career, but looking ahead to his Friday night performance.

“I have no one to thank but my coaches for giving me the trust today and giving me the start on the bump,” Keller, who credited his fastball and curveball for his successful outing, said. “My family, my mom, my dad – everyone that I love – thank you so much for today. It means a lot to me because it’s probably one of my last baseball games.”

“Keller was really pumped for this game,” Pennridge coach Craig Whitten said. “I told him last week, ‘Quinn you’re going to start on Senior Night’ and he was so pumped, so happy. When I went to take him out of the game because he was at his pitch count he wanted to hug every single one of the kids when he came in. Nobody commands the type of respect and the love on this team that Quinn does. He’s a team favorite, everyone loves him to death.”

Abington and Pennridge are both on the outside looking in for the District 1-6A playoffs. Friday night’s non-league game did not count towards the playoff standings.

The Ghosts are No. 25, five spots away from the 20-team playoff field. They have one more league game left next week against No. 10 Quakertown to try to get into the playoffs.

“It’s going to be the last home game for a lot of seniors,” Dardaris said. “We want to go out on a bang. We’ll go out and grind, hopefully get a big district win.”

“Snowball’s chance,” Whitten said of qualifying for districts. “Best thing we can do now is go for .500. I think we’re 8-10 now. We have two next week on Monday and Tuesday. Winnable games, so I’m hoping at least get to .500 to give the seniors something after the two-win season last year.”