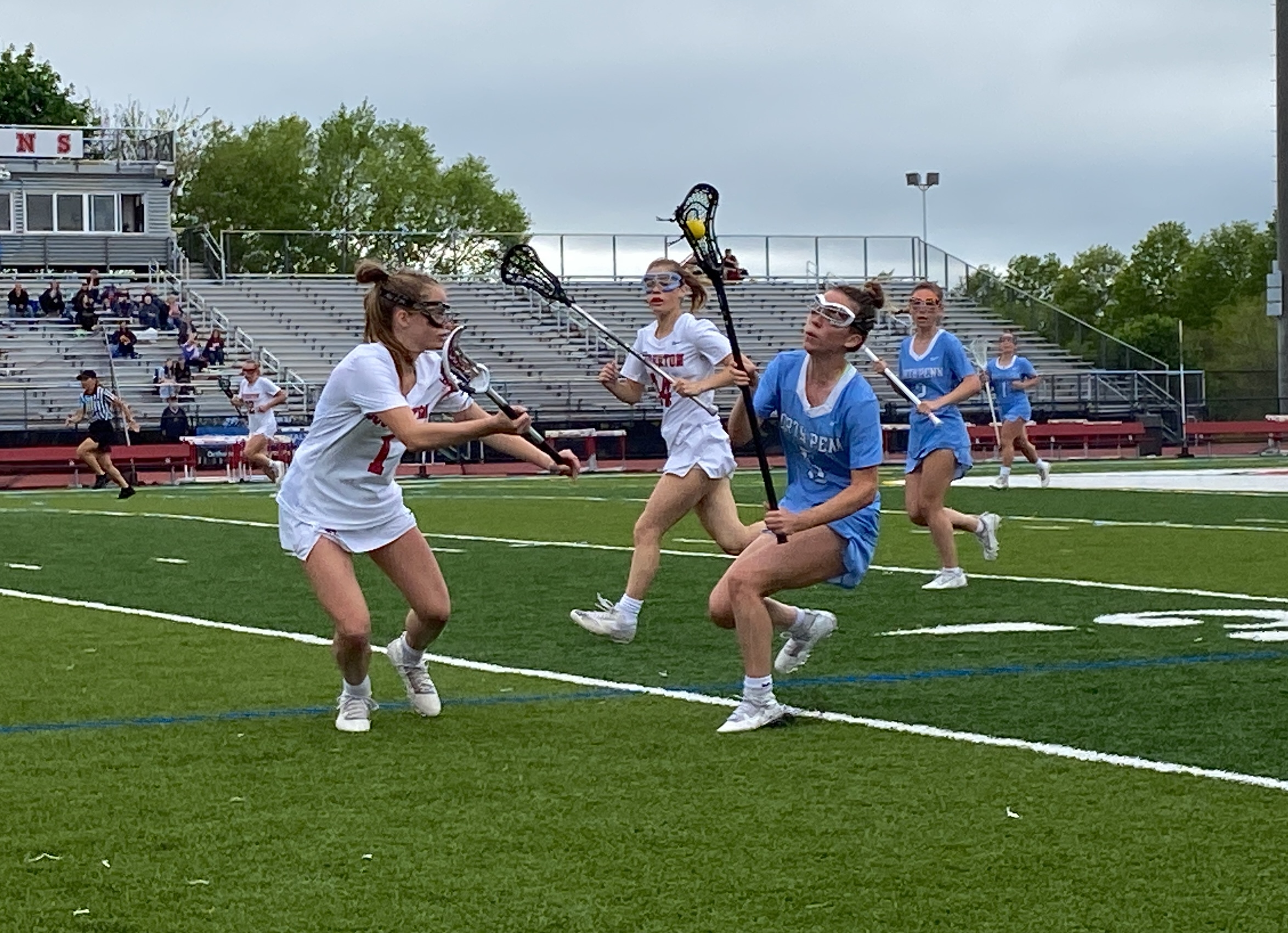 North Penn's Kerry O'Donnell (5) looks to get past Souderton's Ava Jones (1) during their game on Friday, May 13, 2022. (Mike Cabrey/MediaNews Group)

After host Souderton pulled to within 10-9 with 11:54 remaining in the second half, O’Donnell put together a personal four-goal over an almost eight-minute span to help the Knights pull away and cap their regular season with a 15-9 victory Friday.

“I think we started having so much space and I started recognizing that,” O’Donnell said. “So I just kept taking it cause I knew we had it.”

O’Donnell scored five times in the second half with the sophomore finishing with  six goals as North Penn (15-3, 10-0 conference), playing its fourth game in five days, shrugged off a slow start to claim a ninth consecutive win.

The North Penn girls lacrosse team poses for a photo after its 15-9 win over Souderton on Friday, May 13, 2022. (Mike Cabrey/MediaNews Group)

“This season it’s about composure,” Knights coach Heather Mellow said. ‘Even if you’re down by four or five goals it doesn’t matter, this is a game where things can turn on a dime. And five goals can go in in like two minutes, right, so you never know what’s going to happen. And vice versa to us, so you got to stay on your toes the whole time.

“But I don’t know why they start off slow. I think it’s to give me agita but I’m not quite sure. And then I call a timeout and then I scream at them and then they go back out and they do fine.”

Souderton (9-8, 5-5), which came into the contest sitting in the 24th and final qualifying spot in the District 1-3A tournament, jumped out to a 4-1 lead at 15:54 in the first half after three straight goals. The Indians were up 5-3 after a Reiley Knize tally at 9:52 but North Penn proceeded to score the next five to take the lead for good.

“It felt like there was so much excitement that we were forgetting the small things,” Souderton senior goalkeeper Tegan Farina said. “We had so much momentum and so much energy on the field that we almost were like ‘Oh we’re still in the game’ you know what I mean – we just we really, really excited to be up by that much.”

GIRLS #LACROSSE: North Penn’s Kerry O’Donnell drives in for a goal & an 11-9 lead 2nd half vs. Souderton. pic.twitter.com/SMhSnUBFFj

Yasmin Khatri scored on an empty net at 2:30 after her interception while Borisow’s eight-meter goal at 0.5 seconds made it 8-7 at halftime.

Goals from O’Donnell and Emily Varilla had North Penn – which clinched the outright SOL National title in iit win over Bensalem Wednesday – up 10-7 at 15:44 in the second half. Consecutive Burns-to-Hallman goals had the Indians down one with 11:54 left but the next four goals all came from O’Donnell.

“She’s been struggling the last couple games trying to find the net to the point where I joked around with her a little bit,” said Mellow of O’Donnell. “But she finally came through. We had a little extra practice here, we had a little extra time and I think that was actually, it helped her immensely.”

North Penn’s Emily Varilla (1) looks to get down the field as Souderton’s Ang Borisow (9) defends during their game on Friday, May 13, 2022. (Mike Cabrey/MediaNews Group)

“I think in the beginning we kind of just were coming out here thinking not that we had it, but we just came out here having too much confidence,” O’Donnell said. “Almost where we needed to really just focus on what we had to do and I think we started with so much more energy coming into the second and that helped us have momentum.”

Farina recorded her 200th career save, reaching the milestone on her fourth save Friday when she denied an eight-meter shot in the first half’s 18th minute.

“That’s crazy because I lost a season to COVID,” said Farina of making 200 saves. “And I started in one game freshman year and I split time my junior year so I honestly went into the season I needed 117 and I was like there’s probably a really slim chance that I’m going to get it and my coach kept saying you can do it if you put your mind to it. And my parents both said you can do it, we believe in you.”

Lauren Hallman had four goals for the Indians, all four assisted by Jess Burns. Knize and Khatri both scored twice.

The Indians have dropped five of their last seven since opening the season 7-3. Friday’s defeat looks like it will keep Souderton out of districts with Plymouth Whitemarsh now 24th in the rankings and Big Red a spot below in 25th.

“I think we have a lot of self-doubt going into games,” Farina said. “I think there’s a lot of ‘OK we lost two of our starters to injury that means we can’t get in this game, we can’t get to playoffs, we can’t do this.’ And I think our coach has been trying her absolute best to tell us we can literally do anything we want to do, doesn’t matter how many people are out, how many people are in, we can win.

“And I think that’s what we came into this game doing and we gave a hell of a fight too.”

Varilla had four goals and three assists while Kayla Stressman added two goals for the Knights, who are third in the District 1-3A rankings. Top eight seeds earn a first-round bye in the district tournament, which begins Tuesday.

Since a 1-2 start to 2022, North Penn has lost just once – on the road to Strath Haven 17-9 April 22 – and claimed its first SOL National championship since splitting the title with Central Bucks East and Central Bucks West in 2019. The outright title is NP’s first since winning the SOL Continental Conference in 2011.

GIRLS #LACROSSE: Souderton goalie Tegan Farina with her 200th career save, denying an 8-meter shot in the 1st half vs. North Penn. pic.twitter.com/cFCHjVTMUk

“It’s just a balanced team and they all get along,” Mellow said. “They’re all really nice girls and it’s a fairly selfless team too. So you see that ball get passed around quite a bit, they’re all looking to dish it off to the next person to go to goal. And they’re just a great group of kids, really they deserve it and they’re good too.”

Varilla scored on an eight-meter then assisted on Riley O’Donnell’s goal at 13:33, pulling the Knights to within 4-3 but Knize drove in to find the back of the net at 9:52 to put Big Red back up two.

But Kerry O’Donnell then Varilla converted on eight-meters to tie the game at 5:39 with Varilla finding Lauren Blanch for a goal at 4:43 to give the Knights their first lead at 6-5.

GIRLS #LACROSSE: North Penn’s @emily_varilla collects a ground ball, turns & fires a shot into the net for a 2nd half goal vs. Souderton pic.twitter.com/pbmS1tn7sw

“They had very packed defense so I think it was kind of getting to us a little,” O’Donnell said. “And I thought we started passing around and getting the openness for each other which was really good.”

Dani Preston scored off a Varilla helper at 3:26 while Stressman scored NP’s fifth straight goal 27 seconds later off a Jordan Baily assist for an 8-5 edge.