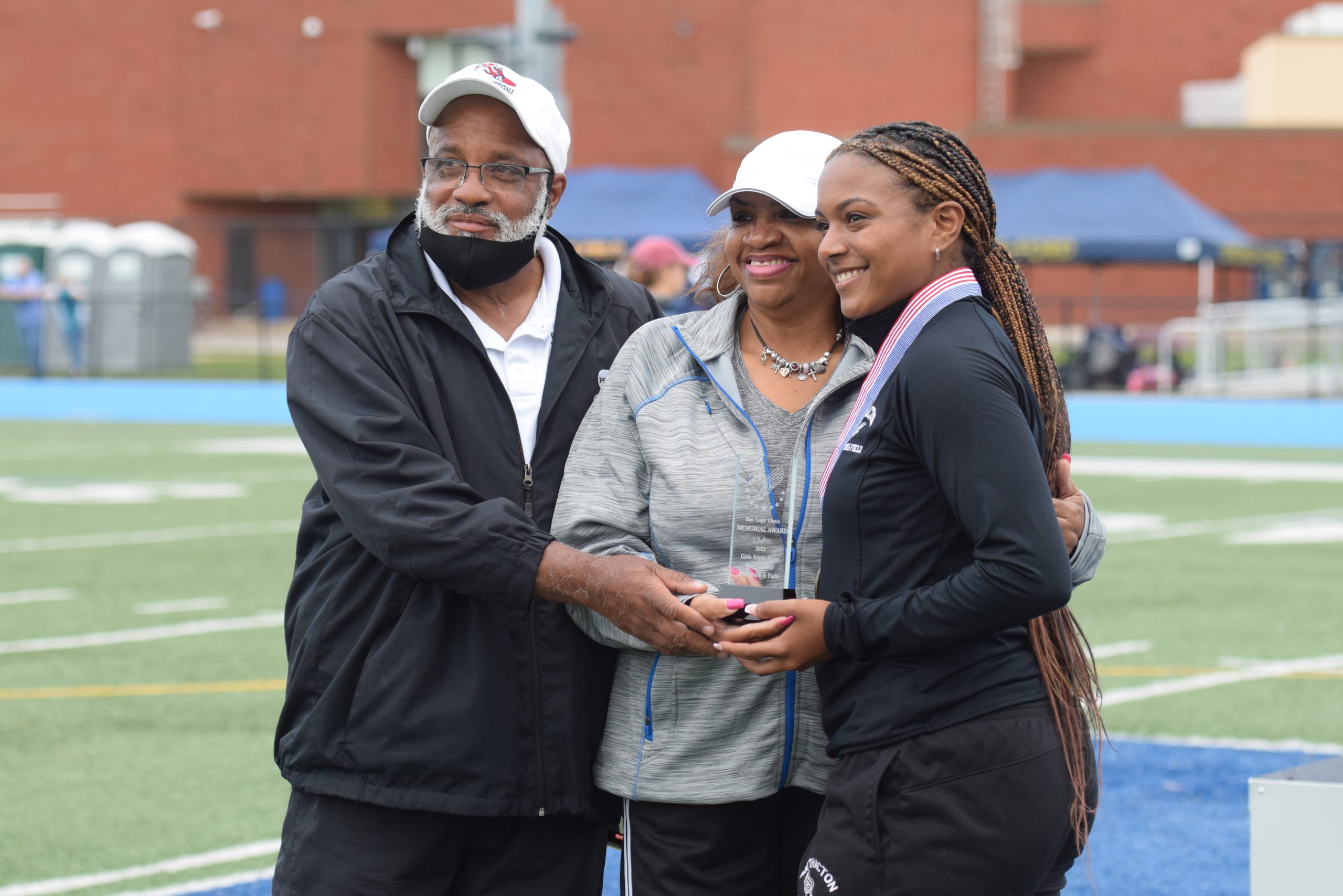 WEST NORRITON >> Day 2 of the Pioneer Athletic Conference Track and Field Championships was barely at its midpoint and Coco Dunham’s neck was already full. So were her hands because of ‘Legs’.

Friday afternoon went exactly to plan for the versatile Methacton senior who won the girls’ discus and triple jump – two of the five events completed – to headline the day’s action at the first PAC championship meet since 2019.

“I feel great,” said Dunham. “I had a plan to do what I had to do to win PACs and for myself to be in the No. 1 position. I’ve been trying really hard and working hard for this so I’m happy to show how I performed today.”

Two medals weren’t all for Dunham: she was also the recipient of the Ron Livers Memorial trophy, which went to the triple jump winners. The awards are in honor of the late Norristown jumps legend and Perkiomen Valley coach, who died in 2020. The awards were presented by Livers’ wife Adrienne and brother Don.

Dunham made quick work, reaching her winning 36-8 jump on her first attempt. In the discus, she hit 105-2 on her fourth try, narrowing edging Boyertown duo Cyenna Martinez (104-4) and Cassandra Trujillo (104-0).

Spring-Ford senior Nene Mokonchu broke her own meet record with a 5-8 clearance in the girls’ high jump. The Pa. No. 1 high jumper and Penn Relays champion was the reigning champion dating back to 2019 after clearing 5-6 as a freshman.

Friday’s other female champions were Owen J. Roberts’ Ava Taylor in the 3,200 meters, winning with an 11:29.01, while Perkiomen Valley sophomore Ashley Pickles won the 300-meter hurdles in 45.15, leading a PV 1-2 finish ahead of teammate Mackenzie Owens who also put down a state top 10 time (45.84).

Owen J. Roberts’ Ava Taylor (1) takes the lead on the outside on the way to winning the girls’ 3,200 meters at the PAC Track and Field Championships Friday at Norristown. (Austin Hertzog – MediaNews Group)

The significance of an award in Livers’ honor was not lost on Dunham: some of her jumping skills can be credited to the three-time NCAA champion who coached the disciplines in the area for many years.

“He taught my sisters, Rainah and Camille – they also did triple jump – so whatever they learned I learned,” Dunham said. “What he taught them, they taught me.”

Dunham’s versatility doesn’t only exist in track and field between throws and jumps. Her primary sport is softball – she plays at the club level for 18U TNT Gold East and will continue the sport in college at Georgian Court University in Lakewood, N.J.

For this year’s seniors, the PAC meet is their one big opportunity to shine on the league stage after not having the opportunity in the COVID-related cancellations of 2020 and 2021.

“We didn’t have (PACs) for two years, so I’ve gotta come back shining, right? I’ve grown so much. I was ready for this,” Dunham said.

Methacton’s SahBri Hill hits the pit on a jump of 43-0 to win the boys’ triple jump at the PAC Track and Field Championships Friday at Norristown. (Austin Hertzog – MediaNews Group)

“It feels really good. I was telling my friends I was going to show out, get these medals and that’s exactly what I did,” Hill said. “Forty-three (feet) is a really good jump, I can’t complain. I haven’t gotten states yet and that’s a work in progress but I definitely hope to get one there as well.

Race of the day >> The boys’ 300-meter hurdles had it all: a tight three-man battle, a photo finish, even the race winner diving and tumbling through the finish line.

That was Spring-Ford senior Justin Russell, who clipped the last hurdle and dove for the finish line, his 40.02 edging out Pottstown sophomore Tyrese Washington (40.22) by 0.20 seconds. Both were Pa. top 25 times. Pottsgrove freshman Trevon Foster took third in 41.33.

“I passed Foster in the middle so I thought I was good, but I saw Pottstown (Washington) on my left going in so I had to push it all the way through,” Russell said. “I tried to cheat the last hurdle and I tripped it, but I had to get past that finish so I just jumped through the line and hope my body got there.”

A soccer standout who was All-Area first team last fall, Russell seems to have found his fit on the track.

“I knew I had a chance,” Russell said. ” I started off the year very well in my first year doing the hurdles. I had some decline as I started to push for time or starting to overthink things, but this environment, the pressure, the competition I was against forced me to run well. I pushed all the way to the end and hit that second gear.”

It wasn’t just the excitement of the wild win, it was a big victory for the Spring-Ford boys who are chasing the team title after going 5-0 in the dual meet season.

“I wanted to have an impact and help us win. Us and Methacton is going to be a close competition to the end so every point matters,” Russell said.

“We won the PAC last year but it didn’t have that same feeling. This whole season we’ve been building up to this championship. We’re on the edge of our seats and pushing, hyping each other up.”

The boys’ shot put was tight as can be as well: Perkiomen Valley senior Ronde Washington threw a 136-9, two inches better than runner-up Christian Gregory of Owen J. Roberts (136-7).

Double jump >> Boyertown junior Tyler Adamski was twice on the podium Friday, winning the boys’ high jump in a tight battle with Spring-Ford senior Cole Turner, and taking third in the triple jump with a personal-best 40-11 1/4.

“I feel wonderful. I put so much hard work into all my events, especially high jump and triple so it feels great to finally get an award for them.”

Adamski’s highest clearance was 5-10, which was matched by Turner. But Adamski cleared 5-8 on his first try, Turner on his second which handed the Bear jumper first place.

It was amazing to be up there twice, it felt very special for all the work I put in,” Adamski said. “I was shooting to win PACs in the high jump, that was my main goal. Triple jump took me by surprise after trying it throughout the dual meets.”

He’s followed by Methacton junior Zach Willen in the 100, while Willen was the top qualifier in the 200.

Complete results can be found on MileSplit here