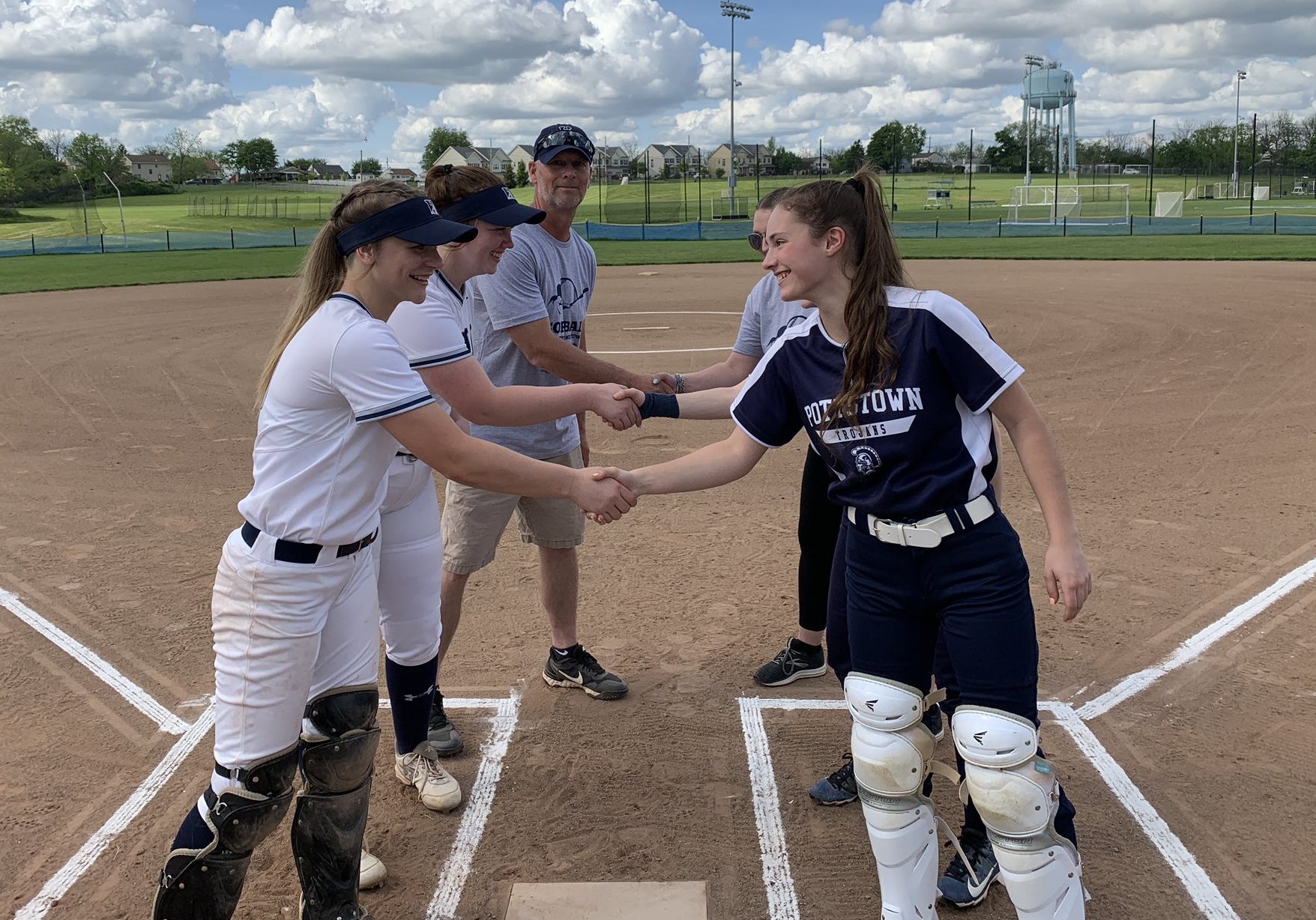 POTTSTOWN >> Youth softball in Pottstown has experienced a measure of growth in recent years.

With help from a newly-established initiative, the hope is for growth and quality of the sport to keep going.

The “Two Teams, One Town” initiative came into existence this spring to support local students who have an interest in playing softball. It’s a collaborative effort between the Pottstown High and The Hill schools, spearheaded by head coaches Jon McKee (Hill) and Jess Tupper (Pottstown).

“I’m excited and grateful to be working with Pottstown High School in this initiative,” McKee, the Blues’ first-year head coach with previous coaching experience at Pottstown, said. “We hope this effort will help aspiring student-athletes have more access to the game of softball.”

The initiative, running since the start of the spring season, staged a fundraiser Thursday on the occasion of a non-league game between the schools at the Hill’s Jim Long Field. All funds raised from the “Two Teams, One Town” drive will directly benefit local student-athletes by subsidizing pitching or catching lessons, travel or recreational softball fees, collegiate scholarships and softball clinic fees, as well as other approved softball-related fees.

In addition to the fundraising component, the teams have also organized an equipment drive to collect used and/or new bats and gloves through the end of May.

At the game, T-shirts sporting the “Two Teams, One Town” logo were offered for sale. Interest and support within the community has also been observed.

“There’s a lot more involvement,” Tupper said. “There are a lot of companies donating to our fund.”

The scope of the drive includes the conduct of pitching lessons and softball camps in Pottstown,

“Hopefully, we can work together on clinics,” McKee said. “Whatever we can do to promote the sport in Pottstown. It’s a joint venture we hope to continue for a while.”

With its season’s game schedule ending Friday, the hope for Pottstown is to build on what had been established this spring.

“We’re looking for youngsters, and more girls, playing for the high school team,” Tupper said. “We were close to having a junior-varsity team this year, and we’re hoping for one next season.”

The game itself was dominated by the Blues, though they had to go to the sixth inning to score a 10-0 victory. Building a 7-0 lead after its first two at-bats, the Hill was held in check by Pottstown for the next two, finally bringing the “mercy rule” into effect with two in the sixth.

Aryanna Bodge threw a masterful two-hitter for the Blues, yielding just a pair of walks while recording 11 strikeouts. The junior hurler backed her mound efforts with a 3-for-4 bat that featured a double and two RBI.

Bella DiCampello chipped in with a 2-for-2, three-RBI plate effort highlighted by a home run.

“We’re looking to continue doing this every year,” McKee said.

Monetary and equipment donations to the “Two Teams, One Town” initiative may be made by contacting Tupper at jtupper@pottstownk12.org or McKee at jmckee@thehill.org. All checks can be made out to Pottstown High School Softball with Two Teams One Town as the memo line.

Questions regarding Pottstown Softball Fund “Two Teams, One Town” initiative may be directed to Coach Tupper or Coach McKee at their e-mail addresses.