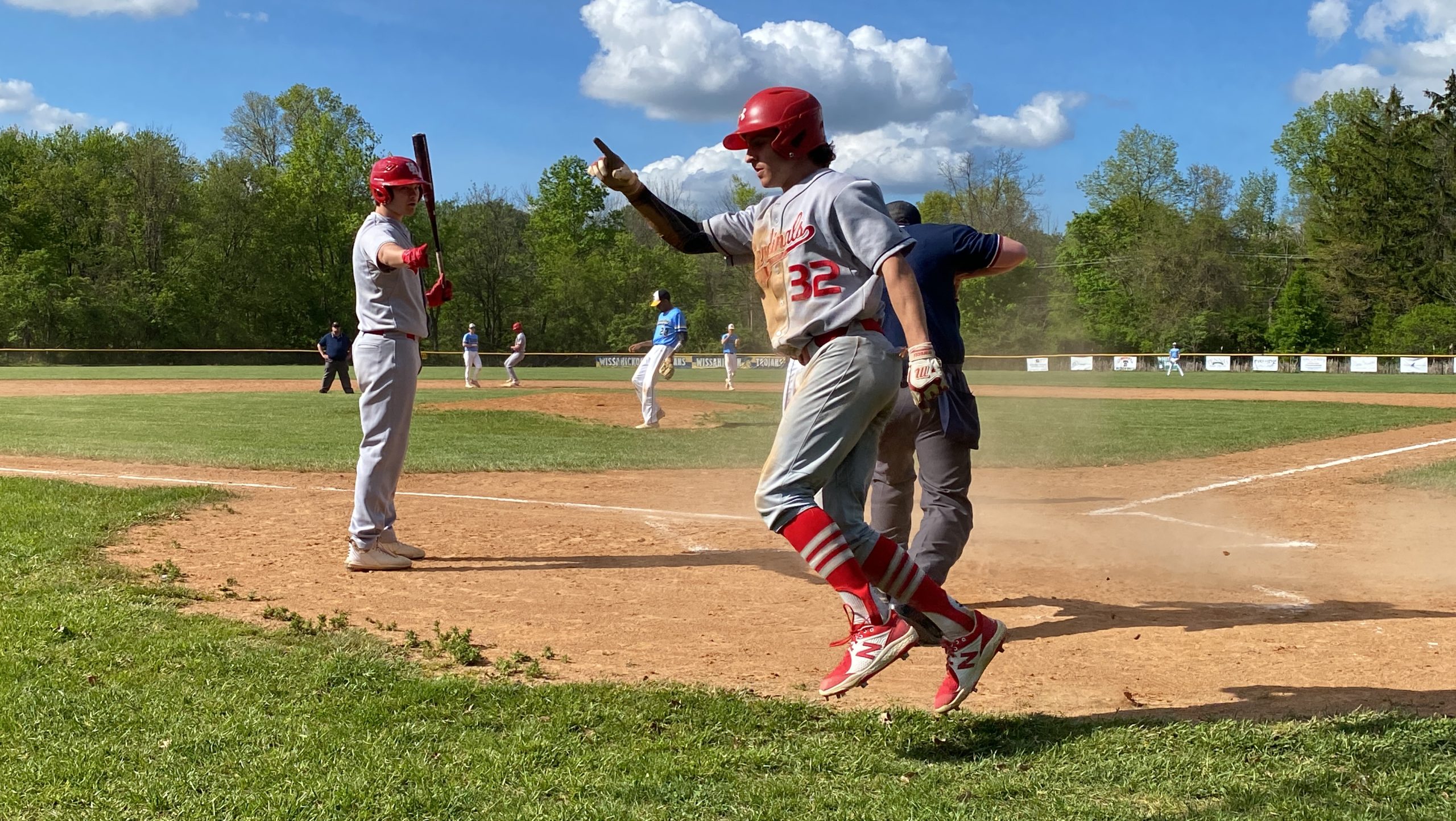 Upper Dublin's Austin Pendleton (32) points towards the Cardinals' dugout after scoring on a wild pitch in the top of the third inning against Wissahickon on Thursday, May 12, 2022. (Mike Cabrey/MediaNews Group)

On his third trip to the plate – with two outs, a runner on second and the Cardinals and host Wissahickon tied 4-4 in the top of the fifth inning – Levis was aiming to do something different.

“My first two at-bats I was rolling over,” he said “So I was thinking left center and I wanted to drive the run in. That’s what I did.”

Levis ripped a ball in that direction and raced around the bases for an RBI triple then scored to make it 6-4 as Leo Soriano reached first on an error.

“When I saw it in left center, I was touching second – I was going three the whole way,” Levis said.

Upper Dublin’s David Sharp (22), Nick Lombardo (17) and Nick Harley (5) celebrates after both Lombardo and Harley scored in the top of the third inning against Wissahickon on Thursday, May 12, 2022. (Mike Cabrey/MediaNews Group)

UD’s offense kept adding runs from there – plating a pair in the sixth then tacking on three more in the seventh as the Cardinals pulled away to earn an 11-4 win in the SOL Liberty Division over the Trojans.

“Feels good to work as a team, have good at-bats and we just play good baseball,” Levis said. “And we got a lot of hits when it mattered.”

“They’re a senior-heavy, experienced team and that showed with their at-bats,” said Trojans coach Andy Noga of Upper Dublin. “From at-bat one to at-bat two, at-bat three to at-bat four they made adjustments throughout their at-bats. They were looking for certain pitches to hit in certain counts and that’s what good teams and good hitters do.”

Shane Henrick was 2-for-3 with an RBI double while Nate DeVincent score two runs for Wissahickon (8-10, 8-7), which took a 1-0 lead in the first then answered UD’s four-run top of the third by scoring three times in the bottom of the frame to knot things at four.

But the Trojans (8-10, 8-7) collected just three hits – all singles – as they were held scoreless over the last four innings and has now lost two straight and three of its last four.

“I think the second pitcher they did [Justin Richman] did a really good job keeping us off balance,” Noga said. “Him and Rizzo did a good job of mixing up pitches and everything like that. We saw their starter [David Sharp], this was our second time seeing their starter so we felt very good against him but you got to be able to make adjustments and stuff on the fly and hitters got to make adjustment be disciplined hitters.”

Wissahickon catcher Aidan DeFeo (2) tags out Jared Levis (3) at home as Levis attempted to score on a wild pitch during the top of the second inning of their game on Thursday, May 12, 2022. (Mike Cabrey/MediaNews Group)

After Ben Junker’s two-RBI single in the bottom of the third pulled Wissahickon to within 4-3, Richman took over on the mound and gave up a game-tying RBI double to Henrick. Later in the inning, the UD right-handed hit back-to-back batters to load the bases with two outs but kept things even at 4-4 with a strikeout.

Richman settled in from there and with the help of two 6-4-3 double plays that ended both the fourth and fifth, picked up the win. He allowed up no runs on three hits, walked one, hit four batters and struck out one in four-plus innings.

Danny Crump took the loss for the Trojans after coming in at the start of the fourth, the left-hander giving up two runs – one earned – on two hits and one walk.

Upper Dublin, third in the District 1-5A rankings, is at Souderton for a nondivision matchup 3:45 p.m. Friday then has two SOL Liberty games next week – hosting Quakertown 3 p.m. Monday at Villanova Ballpark at Plymouth and visiting Hatboro-Horsham 3:30 p.m. Tuesday.

“I think we’re putting together a lot of at-bats and playing good defense, pitching,” Levis said. “Just got to keep working, keep moving.”

#BASEBALL: @UDCardinalPride’s Tristan Cairnes with an RBI single up the middle for an 8-4 lead T6 vs. Wissahickon. pic.twitter.com/KZGmvXrtSL

Wissahickon, 10th in the 5A rankings with 12 making the playoff field, is at Plymouth Whitemarsh 3:30 p.m. Tuesday then hosts a nonleague game against Lansdale Catholic 3:45 p.m. Wednesday.

The Trojans scored Thursday’s opening run in the bottom of the first thanks to three straight two-out walks, the last by Morgan Wilson with the bases loaded bringing in DeVincent to make it 1-0.

Upper Dublin took the lead with a four-spot in the top of the third. With one out, Rizzo reached on an error, Lombardo drew a walk and Nick Harley was hit by a pitch to load the bases. Pendleton, running for Rizzo, came home on a wild pitch while Cairnes’ two-RBI double down the third-base line made it 3-1.

Two batters later, Levis hit a grounder to the infield’s right side but the Trojans could not cover first base in time and the two-out RBI single scored Cairnes for a 4-1 lead.

Wissahickon’s Nate DeVincent (13) slides into home plate to score in the bottom of the third inning against Upper Dublin on Thursday, May 12, 2022. (Mike Cabrey/MediaNews Group)

In the bottom of the third after consecutive one-out walks, Junker knocked his two-RBI single into left with Henrick’s RBI double to center the next at-bat making it 4-4.

Levis, however, gave the Cardinals the lead in the top of the fifth with his two-out RBI triple – his third hit of the afternoon – then scored after an error on Soriano’s grounder to the infield’s right side for a 6-4 advantage.

The Cardinals extended their lead to 8-4 with two runs in the sixth. With one out and runners on second and third, Hartley was denied a hit by a diving catch from center fielder Blake McClintic in left center but Pendleton scored on the play to make it an RBI sacrifice fly. Cairnes followed with an RBI single up the middle.

In the top of the seventh, Rizzo made it 10-4 with a bases-loaded two-RBI single. The next at-bat Lombardo drove in the game’s final run with an RBI single to left.