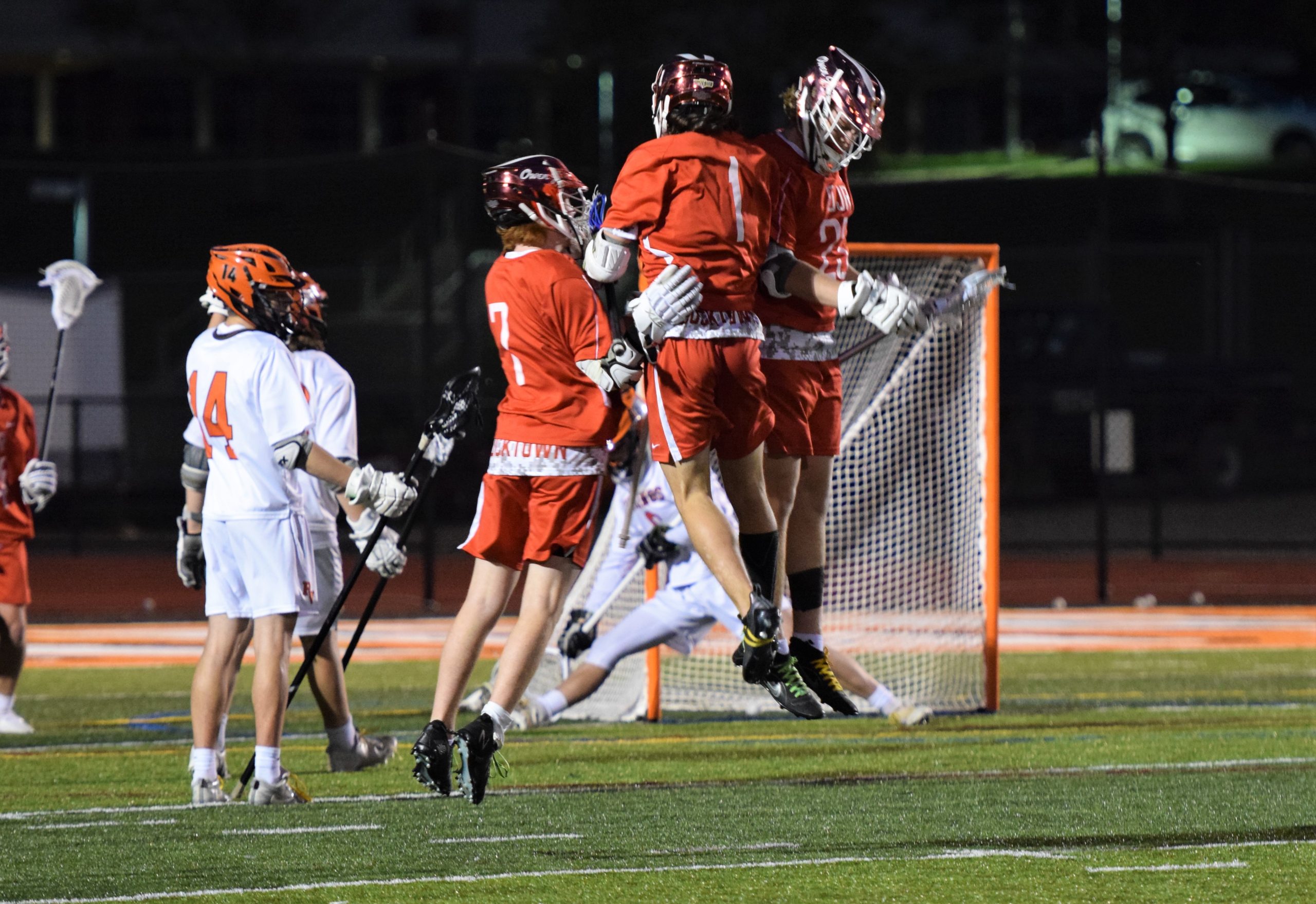 Owen J. Roberts’ Josh Devine (1), Dylan Gazda (23) and Will Jaeger (7) celebrate after a goal in the second half against Perkiomen Valley during a PAC semifinal Tuesday. (Austin Hertzog - MediaNews Group)

GRATERFORD >> The jubilant cheers from inside the visitors’ locker room told the story of a program who’d just captured their biggest win in years.

The stoic, determined faces that emerged minutes later told the story of a job only halfway finished.

The outcome was rarely in doubt in the opening game of the doubleheader, as top-seeded Spring-Ford started the Final Four by dispatching No. 4 Methacton, 10-4, to keep intact their perfect streak of playing in each PAC Final Four lacrosse title game since the event began in 2007.

Spring-Ford’s Justin Wixted (9) is congratulated by teammates after scoring a goal against Methacton during a PAC semifinal Tuesday at Perkiomen Valley. (Austin Hertzog – MediaNews Group)

Josh Devine and Dylan Gazda combined for nine goals (five from Devine, four from Gazda), while senior goalie Will Cody pushed aside 16 Perkiomen Valley shots in keying the victory that announced OJR’s re-emergence as a force to be reckoned with in area lacrosse.

From 2007 to 2017, Spring-Ford and OJR competed for each year’s lacrosse championship. But in 2018, Perkiomen Valley supplanted OJR as the Rams’ opponents, culminating in the Vikings’ first PAC title last season (the Final Four itself was cancelled due to COVID-19 protocols.)

Now with the scholastic sports scene returning to normal in 2022, the PAC final will see a familiar, albeit a few years interrupted, matchup.

“This is great, it feels really good,” Zadroga said, “but the job isn’t done. We’re right back here Thursday for Spring-Ford, and we haven’t beaten them in nine years.”

To a man, Zadroga’s players agreed.

“Everything was going great on offense,” said Gazda, who will play at Gwynedd Mercy next year. “But it means nothing unless we beat Spring-Ford. We’ve had a goal to do just that since the beginning of the year.”

In particular, Gazda and Devine were ‘going great’ on offense, their nine-goal combined performance highlighted by Devine’s first-half natural hat trick that turned a 3-1 Perkiomen Valley lead into a 4-3 OJR advantage, and Gazda’s third and fourth goals of the evening, separated by just 51 seconds, to ice the game in the fourth quarter.

In between, goalie and Seton Hill commit Will Cody made 13 consecutive saves (16 in total) to thwart Perkiomen Valley’s offense throughout the final 43 minutes. After three early goals, Cody was spectacular the rest of the way.

“I was seeing the ball pretty well tonight,” he said. “And I think it’s part of being a goalie, forgetting those early goals and moving forward.”

“He’s a tremendous goalie,” said Perkiomen Valley coach Bryan Churchey. “Many of our shots, we were shooting from 15 yards out or more – that’s not how you beat a player of his caliber.”

Will Jaeger added OJR’s other two tallies. Matt Farrington led the way for Perkiomen Valley with three goals, including the 100th of his career.

Perkiomen Valley (14-4, 7-3 PAC) came into play ranked No. 4 in District One Class 3A, and figures to enjoy a first-round bye before returning to play next Thursday in a second-round District game.

“We have 18 seniors – and it’s up to them how they want this season to end,” Churchey said. “We were in our own heads tonight.”

Spring-Ford rode a dominant third quarter to victory. The top seeds turned a 5-3 halftime advantage into a 9-3 lead after three quarters. Will Fish and Justin Wixted each completed hat tricks with highlight-reel goals (Wixted finished with four scores for the game.) Wixted used a fake spin move and face dodge for his third tally, while Fish finished his effort with a backward over-the-shoulder tally late in the third quarter

Spring-Ford’s (12-4, 9-0 PAC) perfect run through the PAC to this point has come in large part to their ability to limit opposing offenses – the Rams allow an average of only four goals per game in conference.

“It makes offense so much easier, with them giving us repeated opportunities,” said Wixted.

“It’s about team lacrosse,” added Fish. “We have one more to go on Thursday night to finish the job.”

The Rams jumped to an early 4-1 advantage before Methacton responded with two quick second-quarter goals to cut the advantage to one.

But SF sophomore Mike Bendowski won a crucial faceoff to allow the Rams to kill a two-minute penalty, paving their way to hold the Warriors scoreless for the next 28 minutes of game action.

“I knew we needed that faceoff,” said Bendowski. “From that point on, we had a really balanced performance – offense, defense, just took care of business.”

For Methacton (12-7, 7-3 PAC), the season will continue in next week’s District 1 Class 3A tournament. The Warriors came into Tuesday ranked No. 13 in a field where seeds 9-16 will host first-round matchups.

“We have things to tune up on both sides of the ball,” he allowed. “This is a good time to regroup before Districts.”

Spring-Ford’s Will Fish shoots a backwards over-the-shoulder shot for a goal against Methacton during a PAC semifinal Tuesday at Perkiomen Valley. (Austin Hertzog – MediaNews Group)

In the cases of Spring-Ford and Owen J. Roberts, however, there’s still business to attend to before PAC playoffs.

For the Wildcats, Thursday is a chance to add some hardware to validate their turnaround campaign, while Spring-Ford looks to prove last year was a brief glitch in what remains an ongoing run of conference dominance.

One thing is for sure, though – neither team will be looking ahead to Districts.

“This game would mean everything,” said Devine. “We’re playing for our families – like my brothers, our alumni, everyone who’s played [at OJR] before us.”