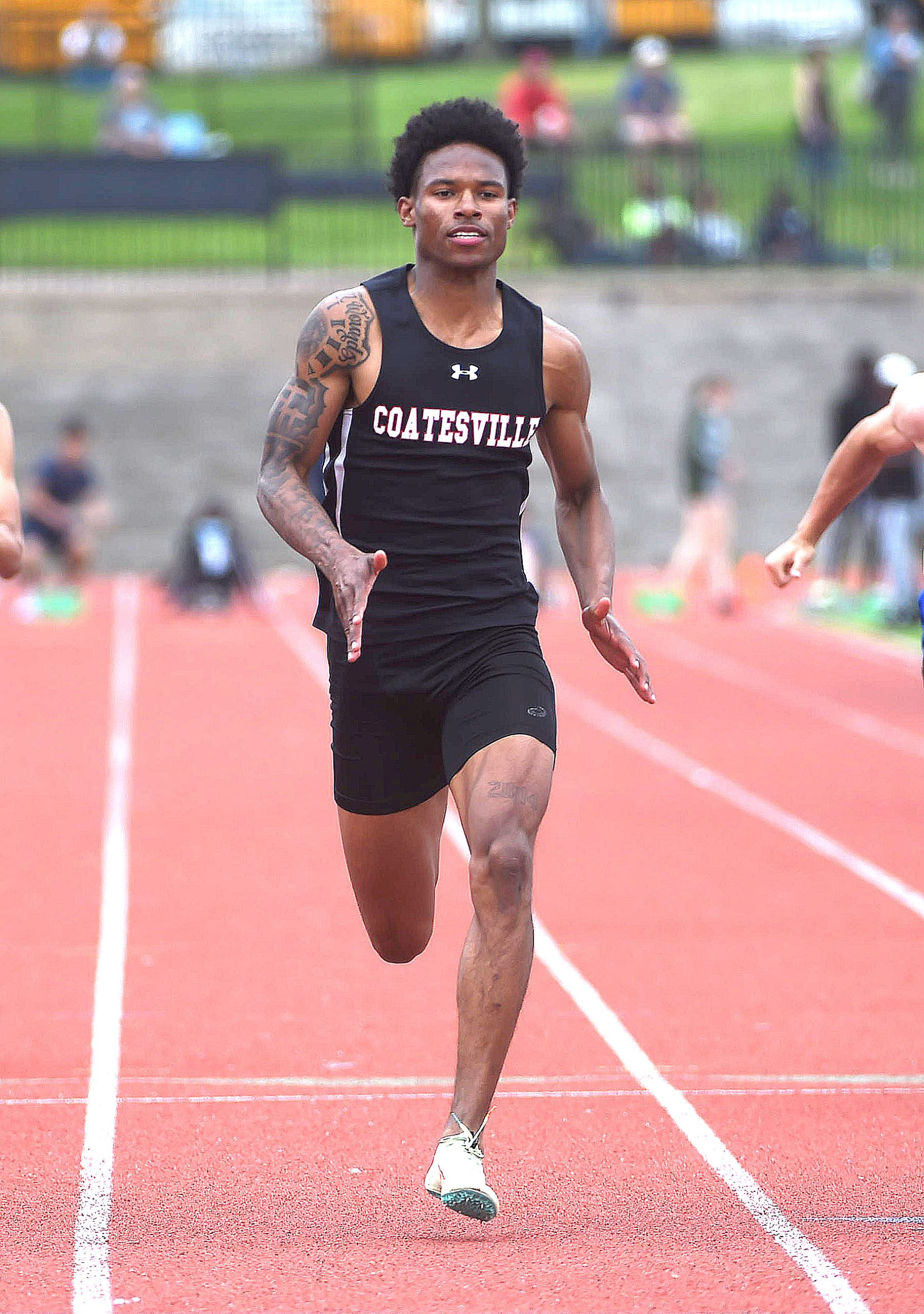 West Chester >> Early Wednesday morning, the site of the 43rd annual Ches-Mont Track & Field Championships had to be changed from Coatesville High School to West Chester Henderson due to a social media threat at Coatesville.
The sudden venue change didn’t keep the league’s top track & field athletes from displaying top form at Henderson Wednesday – one Ches-Mont runner broke a 31-year-old meet record.
Downingtown West senior Elijah Ford set a meet record in the boys 400 meter run (48.35). The previous record was held by West Chester Henderson’s Chad Black (48.40), a mark that was set in 1991.

“I wanted to start out strong, and keep my form for the whole race,” said Ford, who was a standout defensive back and wide receiver for the Whippets football squad last fall. This autumn, Ford will be playing football for Sacred Heart University.
Fellow Whippet Kelly Bell (second place, 49.52) and Coatesville’s Jabari Stocker (third, 49.66) also recorded district-qualifying times. Stocker anchored Coatesville’s first-place boys 4×400 relay team later that afternoon.
It was a good day for Downingtown West in the 400 meter run, as Whippet junior Ryleigh Hearn won the girls 400 meter run (57.86).
“I wanted to run hard for the first 17 steps, then open it up on the backstretch,” said a smiling Hearn. “The last 200, I was leading all the way.”
Also posting district-qualifying times in the girls 400 was West Chester Rustin’s Maddie Miller (58.61), and Great Valley’s Shayla Bismark (59.26) and Gillian Yonce (1:00.01).
The Coatesville boys won two relay races Wednesday. In the final track event of the day, the quartet of Donte London, Tommy Silverster, Lebron Bessick and Stocker won the boys 4×400 with a time of 3:26.55. Bessick was clocked at 50.5, and Stocker at 49.6. The Raiders were in third place when Stocker, the anchor, took the baton.
The boys 4×100 relay resulted in a photo finish, as Coatesville (42.06) edged Downingtown West (42.07) for first place with a quartet of London, Robert Turner, Amir Haskett and Bessick.

Unionville’s Betta Harkness takes the baton from Molly Main as the Longhorns won the 4×800 relay in a time of at the Chest-Mont Championships at West Chester Henderson Wednesday. (PETE BANNAN – DAILY LOCAL NEWS)

West Chester Rustin finished first in the girls 4×400 relay with a time of 3:56.72, which is a school record by seven seconds and is the fourth-ranked time in Pennsylvania. The winning quartet was Amelia Foore, Maddie Miller, Keturah Darwon and Alexander, who anchored with a split of 56.1.
Alexander also won the girls 200 meter run with a PR time of 25.34, and following that race said, “I had run several events [before the 200], and was really tired but I muscled it out.”
The Rustin quartet of Foore, Darwon, Kayla Stephney and Alexander won the girls 4×100 relay (48.88), and Miller and Darwon each won an individual event Wednesday.

Downingtown East’s Caiden Leen takes the baton from Brendan Flynn as the Cougars won the 4×800 relay in a time of 7:59.68 at the Chest-Mont Championships at West Chester Henderson Wednesday. Nick Steinfeldt and Will Nakahara ran the first two legs. (PETE BANNAN – DAILY LOCAL NEWS)

Miller, a sophomore, won the girls 800 meter run by nearly one minute (2:19.02) in a field that included five district-qualifying times, and Darwon won the girls 300 hurdles (46.26).
“I tried to stick with the pack for the first 500 [meters], then go all out in the last 300,” said Miller, who earlier in the day placed second in the girls 400.
“This was a massive PR for me,” said a happy Darwon, who has qualified for Districts in several events. “I concentrated on staying low, and staying strong at the end.”
In the 100 meter races, a couple of perennial first-place finishers prevailed. Coatesville’s Lebron Bessick won the boys 100 meter dash (10.88), and West Chester East’s Chinonye Moneme won the girls’ 100 meter race (12.36), edging Downingtown West’s Jada Alston (12.37). Bessick also won the boys 200 meter run (21.37).
Unionville’s Alex Pancoast won two field events, girls shot put (37-9 ¾) and girls discus (126-1). Both are district qualifying marks by a solid margin.