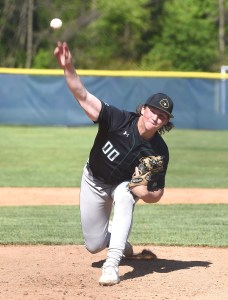 MARPLE – There was a palpable big game atmosphere at Cardinal O’Hara Monday.

Bonner-Prendergast is the No. 1 team in both Delaware County and the Philadelphia Catholic League. Undefeated in the PCL, the Friars are state championship contenders in Class 4A.

O’Hara had only one league win entering the day, but has played well in most games.

Bonner vs. O’Hara is always one of the top rivalries in Delco. It’s never uninteresting, regardless of where each school sits in the standings.

The Friars won again, 5-2, to maintain their hold on first place. They are 14-1 overall, their only loss coming at the hands of Moorestown (N.J.).

Unsurprisingly, Monday’s victory was one of the closer games the Friars have played all season.

“We knew coming in that it was going to be a tight, scrappy game,” Bonner coach Steve DeBarberie said. “Put the records aside. Every game (O’Hara) has played in has been close. They pitch well and we knew offensively they were going to try to swipe some bags, bunt some guys over and put on a squeeze here and there. The good thing is I thought we were prepared for it. I thought our team executed great and our guys did a great job all around.”

Bonner-Prendie ace Michael Anderson, a University of Rhode Island signee, came out blowing fastballs by everyone in the first inning. He struck out the side in order after the Friars produced two runs in the top half. Anderson generated 12 swings- and-misses in the first two frames and didn’t allow a hit until there was one out in the fourth.

“He came out with some of his best stuff today,” catcher Joey DeMucci said.

Anderson has been excellent all season. He started to fall behind in the later innings as the Lions were able to grind out good at bats. Trailing 3-0 in the fourth, Paul Daly smacked an RBI single up the middle to cut B-P’s lead to two runs.

Anderson was pulled with two on and nobody out in the bottom of the seventh inning. He allowed six hits and struck out five.

“I felt pretty good at the start. But I wouldn’t say that I had my best stuff today,” Anderson said. “I got to live with what I give every single day and just keep working hard. I know I gave a great defense behind me, too.”

Luckily for Anderson and his teammates, O’Hara’s baserunning was terrible all game. Daly was thrown out at second trying to stretch his RBI hit into a double, then Mark Zecca was gunned down at the plate by Kevin McGonigle on the same play.

The Friars fielders recorded five baserunning outs. The biggest occurred when DeMucci threw out Kevin McGuire taking a huge lead off third base in the seventh. At the time the Lions had runners on the corners with one out.

“I just picked up on their mistake and helped my team,” DeMucci said.

Jaxon Kehoe moved from third base to the mound in relief of Anderson. The sophomore recorded a pair of punchouts to earn the save.

“My man Jackson came in and threw strikes and we got out of it with only one run,” Anderson said. “That’s all we can ask for out of the bullpen every time. We’ve got to keep doing what we’re doing, keep playing for each other.”

DeMucci and Anderson smacked back-to-back RBI doubles in the first inning off O’Hara starter Noah McMullen. In the third inning DeMucci smashed a line drive to third baseman Daly, who made a nice diving stop but airmailed the throw to first, which enabled McGonigle, who doubled, to trot home easily from third.

Kevin Henrich launched a sacrifice fly and Harry Carr ripped an RBI double to put Bonner ahead 5-1 in the seventh.

This has been a special season for the Friars, but they know the road ahead is long and complicated. DeBarberie’s message to his group is simple.

“I just tell them to keep an even keel,” he said. “Don’t get too high on the highs because it doesn’t matter come playoffs. The playoffs are going to be a whole different ballgame. We can be undefeated in the regular season, but the Catholic League playoffs is a completely different animal. Every game is going to be just like (Monday’s).”

Archbishop Carroll 5, Devon Prep 4 >> Chris Tomlinson was 2-for-2 with two RBIs and Mike Ashton had a double and triple for the Patriots.

Roman Tozzi struck out six over five innings to earn the win. At the dish, Tozzi singled and scored a run.

Evan Wineburg pitched two scoreless innings of relief, striking out two, to get the save. Harold Ivery chipped in a hit and one RBI.