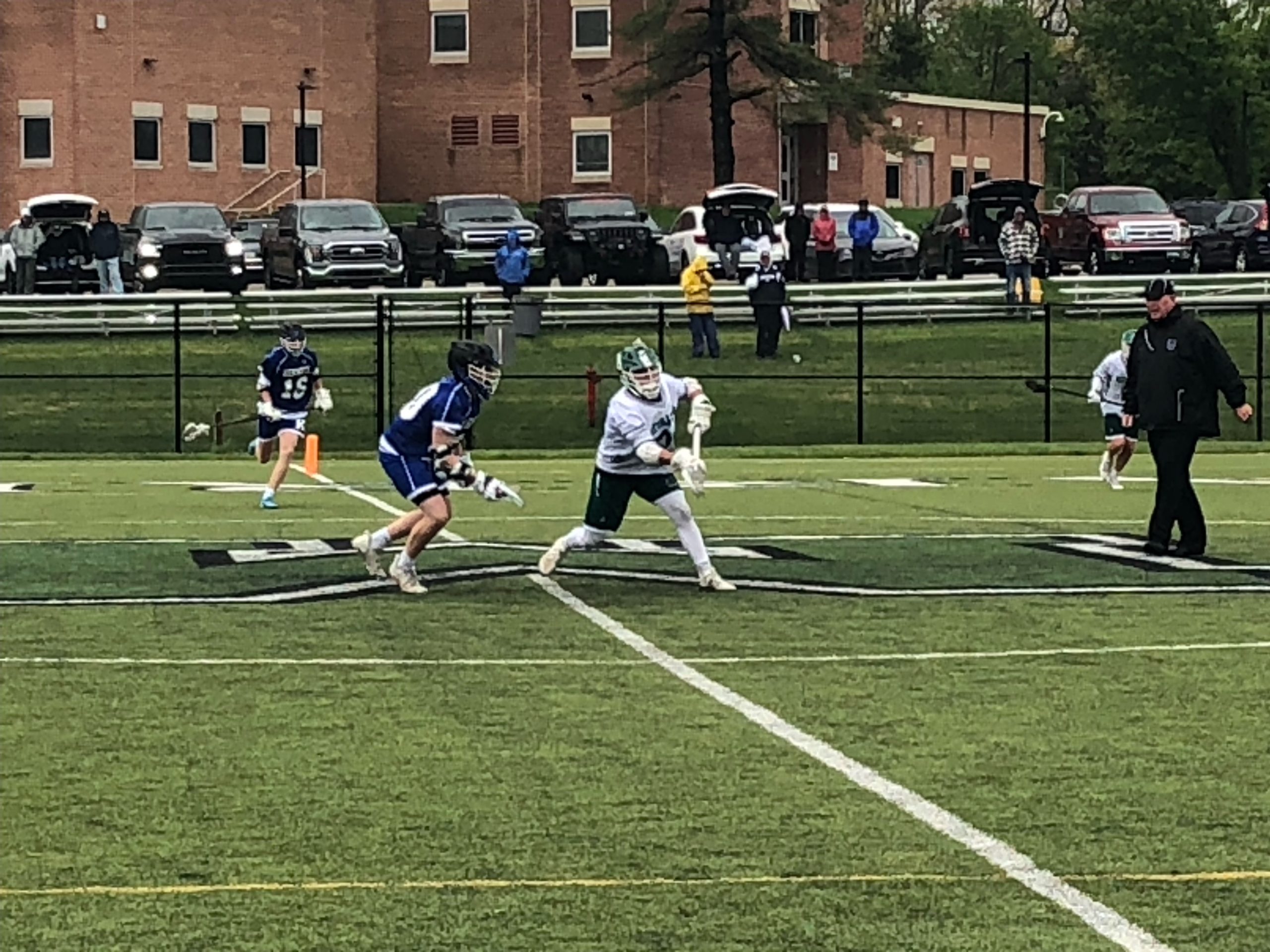 EAGLEVILLE >> It’s the idea of an individual battle being so important to a team sport that Brody Borkowski enjoys most about his role.

The senior midfielder on Methacton’s lacrosse team is intense, competitive and most of all, tough. Those, plus a lighting-quick reaction time, all make Borkowski one of the most effective faceoff specialists in the Pioneer Athletic Conference and in District 1 as a whole. A shoulder injury hampered the senior both in the wrestling season and at times this spring, but he’s finally starting to feel like he’s rounding back into form.

The timing couldn’t be better for the Warriors, as they’ll need their man on the X at his best for the PAC playoffs and beyond.

“In your head, you have to always tell yourself ‘you’re better than this guy,’ no matter who it is and try to beat him as much as you can,” Borkowski said. “I wrestle, so it’s like a wrestling match in a game. It’s a mental check every time you go out there.”

Methacton dropped Saturday’s regular-season finale 11-5 to visiting Kennett but the silver lining was the performance of Borkowski and his understudy – younger brother Levi – on faceoffs. There’s no doubting Brady Borkowski’s toughness, not with the senior playing out the season with a torn labrum that will require surgery in June and cost him his senior postseason in wrestling this winter.

Levi, a sophomore, admirably filled the gap while his older brother was out and is able to give Brody a spell during games all while gaining valuable experience before taking over the role for the next two seasons.

The Borkowski duo combined to win 15-of-21 faceoffs Saturday and Warriors coach Matt Saxson has instituted a pretty fair system to decide which brother will go out for a faceoff. While their athlete background outside of lacrosse leans heavily to wrestling, it’s more of a driveway basketball approach to divying up the draws.

Either way, Methacton benefits because they’re both really good at winning faceoffs.

“Possessions in lacrosse are key, it’s a game of runs but if you have someone who can turn it into make-it, take-it, that’s key,” Saxson said. “We depend on him a lot for that make-it, take-it, almost a rec basketball kind of mentality. We even have it as a competition on the sideline, Brody starts taking the first one then if he drops one, Levi gets his chance to make-it, take-it.

“It gives Brody a chance to rest his shoulder a little bit but also keeps that competitive edge they both really like.”

Brady Borkowski got his start as a wrestler at about four-years-old then picked up a lacrosse stick a couple years later. By the time he was in sixth grade, the specialist role felt like his place and he began training intently to master it.

Considering the alternatives, it was probably the right athletic career move.

“I played tee-ball and hated it,” Borkowski said with a grin. “I needed something with more contact, more action.

“They put me out there to go get ground balls, I didn’t really know what I was doing but I started picking it up, got better at it and then got more serious about it.”

Borkowski and his senior classmates have helped usher in unprecendented success for the Warriors. After losing their sophomore season in the spring of 2020, they came back and helped the program not only qualify for districts for the first time, they earned a first-round home game and won it before bowing out to powerhouse Conestoga in the second round.

This spring, for the first time since 2019, the PAC playoffs are back and Methacton has earned itself a spot in Tuesday’s upcoming semifinals against top-seeded Spring-Ford. Methacton is all but a lock for districts and most likely another home playoff game but right now, all the Warriors are focused on is the PAC championship.

For Borkowski, his aim is to have Tuesday’s final four game be a sort of redemption.

“I’m excited about the environment and I hope our team brings a ton of energy and confidence,” Borkowski said. “We have to come out hot, last game I didn’t do too well against them, so it’s on me to come out hot. I need my whole team behind me, every guy on our team has to be ready.”

Naturally, a significant shoulder issue has impacted Borkowski’s effectiveness. Saxson noted his senior specialist isn’t able to utilize his full power but he can counter that with his exceptional reaction time and quick-twitch move off the official’s whistle that begins a faceoff duel.

Whether its matching sticks on the X or that split-second of an opening in a wrestling match, usually the guy who can make that move faster has the advantage and Borkowski has honed that sort-of sixth sense to win the fight for the ball and gain his team a possession.

“He has really good anticipation,” Saxson said. “With the labrum issue, he’s a little bit weaker off the draw so getting the ball to our wings has been a little bit of an issue but his reaction time is one of the best in the PAC so he’s still going to be a big factor for us.”

Saxson described Borkowski as having a “killer mentality” but also someone who constantly expects more of himself.

“Our goal all year has been winning a PAC championship, so that’s where all our focus is now,” Borkowski said. “We’ve tried to keep it one game at a time and that’s even more important now.”