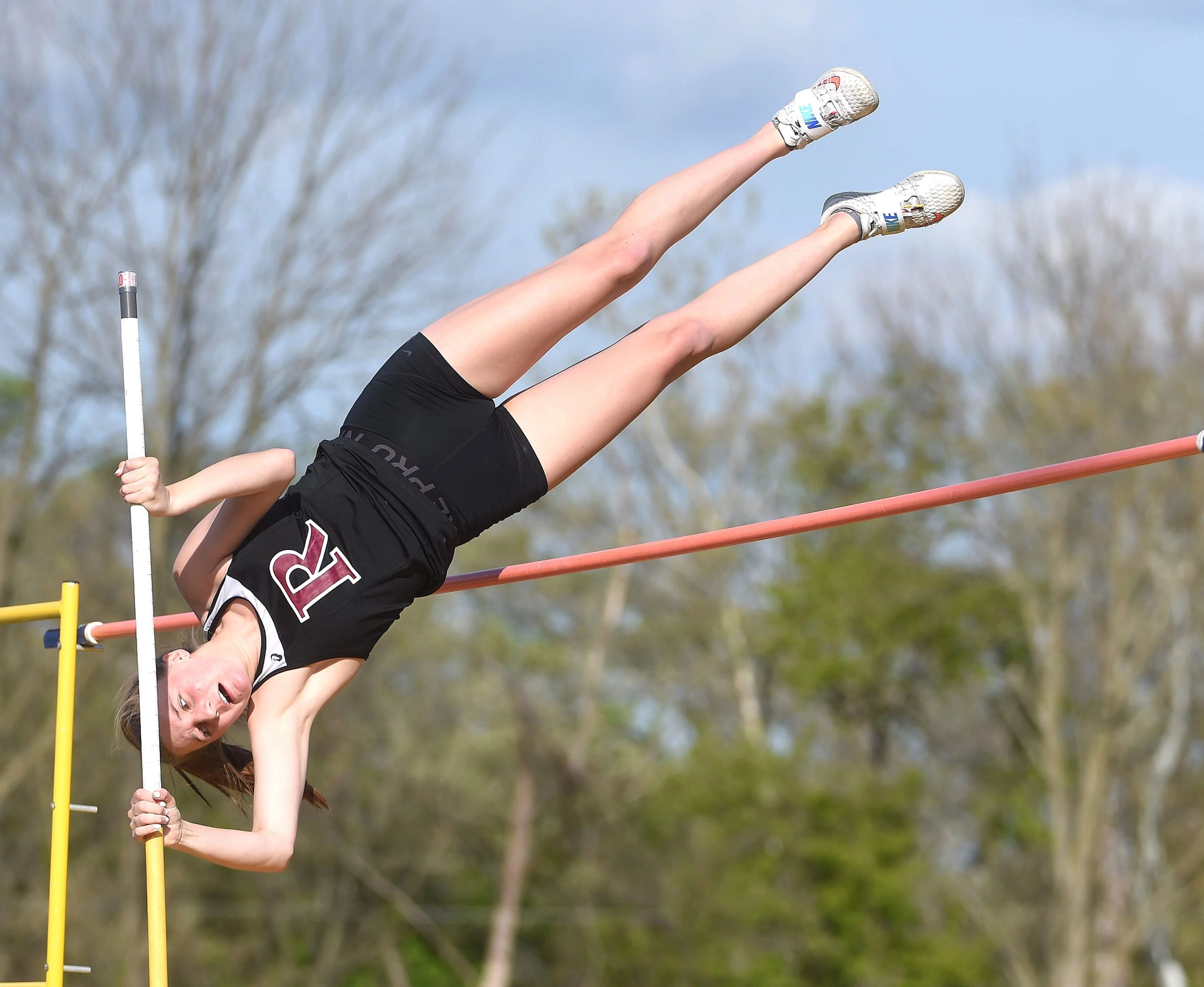 Hill almost effortlessly glided over the bar at 10-6 on her first attempt on the mostly sunny 74-degree day, a hefty crowd applauding her.

On her next vault, Hill made 11-feet just as easily. That earned her another round of congratulations from Ezzie and an impressive audience of opponents, three of whom vaulted 9-0 or more.

“It was cool to do it with her here,” Hill said of Ezzie. “She’s always been so good to me. When I didn’t have a specific pole vault coach, she would help me out last season. And I always loved her. She’s awesome.”

That was the only field record that fell at the girls’ field championships at Upper Darby High. The running events conclude Friday, starting at 3:30 p.m. Rain or shine, track folks.

Though Hill was the only vaulter left in the competition when she established the record, the sport has come a long way in Delco since Ezzie and McDonald made their marks.

Erinne Bresler of Episcopal Academy cleared 9-6 in the vault to take second, Annalise Kuhn of Strath Haven and Lauren Troy of Penncrest both cleared 9-0. Kuhn was third, Troy fourth based on fewer misses.

Those numbers almost brought a sentimental tear to the eye of Ezzie, a teacher in the Upper Darby School District who enjoys imparting her trade secrets on the next generation.

“I’m lucky I got to actually witness this today,” Ezzie said. “I love pole vault and to see these kids loving it and someone like Sophia out there breaking records is just special. I’m really happy to see it.”

Hill is skilled beyond her years, according to Ezzie and some of the other coaches who were milling around the pole vault pit Thursday. The only left-hander in the event, she’s a blur sprinting down the runway with the 15-foot pole in her hands. The final extension and flip over the bar produce pure euphoria.

“It’s awesome, it’s just awesome,” Hill said. “And today there was just such a fun crowd. It definitely hypes me up. It’s so much fun. I plant it and I should have thoughts, but I don’t. I mean I try and think, ‘get inverted, keep the feet together,’ all the mechanics. But once I plant it, I just go. I know my muscle memory will take me from there.”

Hill didn’t clear 11-6 in this meet, though her first two vaults of the day would have easily thrown her over 12 feet. There’s plenty of time to get there again.

Hill cleared 12-6 indoors this season, which is the girls Delco indoor record.

“For a sophomore she’s very advanced,” Ezzie said. “She pretty much gets inverted and finishes it off like someone in college, which is pretty cool to see. She jumped here last year, and I was like, ‘Sophie, you’re going to get a lot of records. Big things are about to happen.’ It’s awesome for her and it’s great for the sport, too, because it’s meant a more competitive Delco’s here.”

Among other competitors in the field events, Steph May of Garnet Valley heaved the javelin a personal best 102 feet, four inches, a gold-medal performance that was 19 feet beyond her previous longest throw.

Alice Etienne of Upper Darby defended her triple jump title, compiling a hop, skip and jump of 35-6. Samantha Sharrow of Cardinal O’Hara was second with a jump of 34-2. The Royals’ Destiny Cofield (33-8.5) and Kyndra Dale (31-5) finished third and sixth, joining Etienne in the medals ceremony.

“I had fun, it was great,” Etienne said. “My teammates were with me. I don’t think about it. I just jump.”

In the shot put, Alexa Brown of Strath Haven registered a state top 10 throw of 43-0.5. Haverford’s Mollie Carpenter (35-8) finished second in the event. Sydney Jones of Haverford won the high jump as she got over the bar at 5-3.

The day, of course, belonged to the pole vaulters, old and new. When Ezzie approached Hill after setting the meet record, she made a friendly request.

“I said congratulations,” Ezzie said. “And keep setting it higher.”