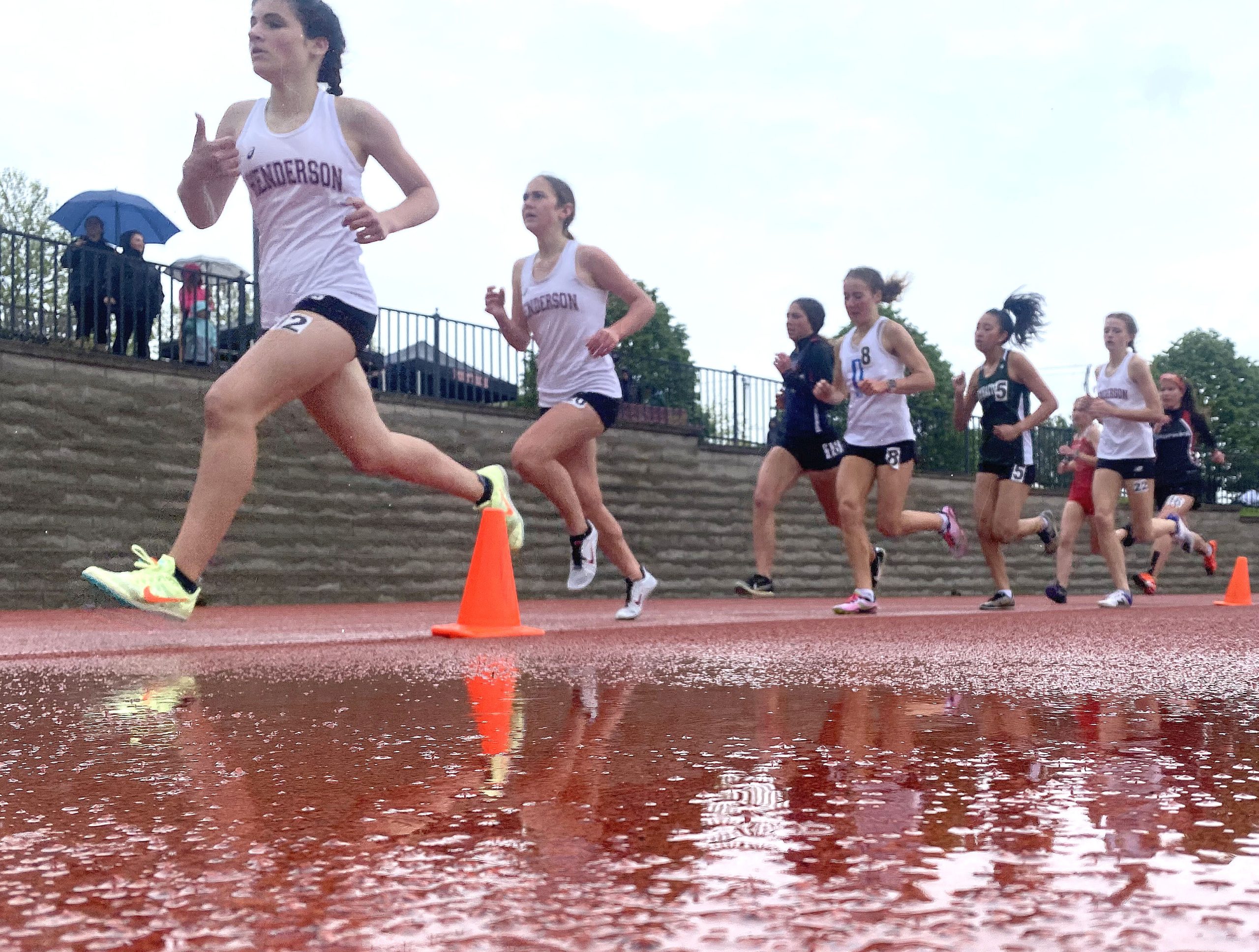 Coatesville’s Tommy Silvester hands off to Marcus Evans in the Boys 4×800 relay at the Henderson Invitational Friday at Henderson High School. Coatesville went on to victory in a time of 8:11.40 with Josh Miller running the opening leg and Dave Kelly taking the anchor in the event. (PETE BANNAN – DAILY LOCAL NEWS)

West Chester >> Friday afternoon’s steady rain did not dampen the spirits of the local track and field athletes competing in the 17th annual Henderson Invitational.
“We had 90 teams sign up for the Invitational, and only a couple dropped out,” noted West Chester Henderson track coach Kevin Kelly.
Coatesville High School won the boys’ 4×800 relay with a quartet of Josh Miller, Tommy Silvester, Marcus Evans and Dave Kelly posting a PR and district-qualifying time of 8:11.40.
“For these guys to run this kind of time in adverse conditions justifies all of their hard work as they continue to improve,” said Coatesville boys track coach Damien Henry.
Downingtown West junior Carolyn Tarpley won the girls 3200 meter run with an outdoor PR time of 10:48.33, nearly identical to her clocking of 10:48.19 at the Adidas Indoor Nationals – Women’s National Elite 3200 meter race in March.

It was a wet track at the Henderson Invitational Friday at Henderson High School but that didn’t stop the runners and field athletes including these boys running in the 1600 meter race. (PETE BANNAN – DAILY LOCAL NEWS)

“I was a little nervous at the beginning of [today’s] race, because that’s when the rain started falling [harder], but our coaches told me to ignore the conditions and run your best race,” said Tarpley. “Going into the second mile, I felt strong.”
In the boys’ 3200 meter run, Downingtown East’s Brendan Flynn clocked 9:12.11, a PR by a dozen seconds. He finished third in race, won by Archbishop Wood’s superstar runner Gary Martin (8:41.57).

“Gary was way out front, so I stuck with the [leading] pack and with 500 meters to go I was feeling good and battled for second place,” said Flynn. “The key [to running in the rain] is knowing that everyone else is running in it, too.”
Downingtown West senior Elijah Ford placed second in both the boys 100 meter run (11.26) and the boys 200 meter run (22.66).
“Elijah is a great athlete and a powerful runner to run [well] in these adverse conditions,” said D-West coach Scott Byrnes of the Whippet football star.

Byrnes also noted that Whippet Ryleigh Hearn, who finished third in the girls 200 meter run (25.93), “has been running great.”
Byrnes pointed out that, despite the rain, there was no wind hampering the runners Friday.
“It’s a fast track they have here [at Henderson] too,” noted Byrnes. “Kevin Kelly runs a great event.”
West Chester East senior Chinonye Moneme won the girls 100 meter run with a time of 12:38.

It was a wet track at the Henderson Invitational Friday at Henderson High School but that didn’t stop the runners and field athletes including these girls running in the 1600 meter race. Two athletes wait to compete in the high jump. (PETE BANNAN – DAILY LOCAL NEWS)

“Chinonye is really dedicated,” said West Chester East track coach Doug Costin. “Tonight is her senior prom, but she was willing to come out here first before getting ready for the prom.”
West Chester Henderson junior Preston Lubeski won the boys’ 400 meter run with a time of 49.51.
“Preston ran a brave race in tough conditions today,” said Henderson sprint coach Chas Wilson. “He had an AP test this morning and ran a 4×100 right before the 400 race – we wanted to test him, and he ran a brave race.”

Unionville’s Alex Pancoast won the girls shot put (40-10) and the girls’ discus (128-4), breaking her own school record in the latter event.
Also for Unionville, Aryan Abbaraju ran a PR 9:19.40 during his strong finish in the boys’ 3200 meter run.
Late in the meet, as the wind began to pick up, the Great Valley quartet of Shayla Bismark, Gillian Yonce, Julia Dill and Stephanie Cristinzio won the girls 4×400 relay by nearly 10 seconds with a time of 4:05.22.
“Running in the rain can be mentally challenging, and I could feel the wind coming down the backstretch,” said Cristinzio. “I think we ran well today, though there was no one really pushing us.”

Trip Gomez win the boys 1600 for novices in a time of 4:40.17 at the Henderson Invitation Friday. (PETE BANNAN – DAILY LOCAL NEWS)

Jacobs broke the Rustin school record in the triple jump, and his mark was ranked No. 1 in Pennsylvania. Jacobs also finished second in the boys high jump (6-0). Rustin’s Ellie Keefer broke her previous school record in the girls 3200 with a time of 10:51.37. The previous record was 10:52.47.

For the Bishop Shanahan girls, Meghan Willis’s 5th place medal in the girls’ 800 meter run was the highlight.

NOTES: Due to the inclement weather Friday, the pole vault was held indoors in Norristown, and Kennett’s Kirstin Hoffman prevailed in the girls’ competition with a mark of 12-9. The results of the boys’ pole vault competition was not available at press time. Local winners in the novice and super novice races included Downingtown West’s Connor Ashe (super novice boys one mile run),