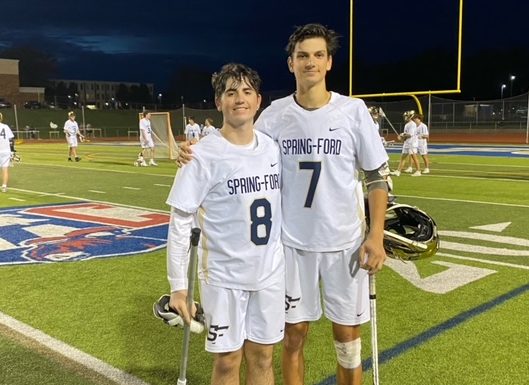 ROYERSFORD >> In one way, Thursday night’s matchup between Spring-Ford and Perkiomen Valley was a winner-take-all showdown.
But by the end, it looked as if the game might just be an opening act.

The host Rams outlasted the Vikings, 5-3, at Coach McNelly Stadium, claiming the outright regular-season league title in a contest befitting the two PAC teams playing the best lacrosse as the regular season draws to a close.

Christian (CJ) Marchini scored the eventual game-winning goal early in the fourth quarter and caused the turnover that thwarted PV’s final chance in the dying seconds to seal the win for Spring-Ford.

Marchini’s two-way effort was reflective of the complete performance turned in by Spring-Ford, who frustrated the Vikings into 24 turnovers on the evening.

“It’s the lowest scoring game so far this year,” said Marchini, “and every play mattered. When the whole team is giving that effort all over the field, it’s very motivating, keeps us rolling.”

Brad Vanella’s 12 saves were the difference for Spring-Ford on the stat sheet – and on the field, at least in the early going.

“I saw the ball well,” said Vanella. “We pressured their offense, and when our defense plays like this it makes my job easier.”

Vanella’s job got easier as the night went along thanks to the Rams two-way play through the midfield led by St. Joseph’s commit Marchini and Carson Bogdan. The Rams forced PV into turnovers on their final two possessions, including a frenetic sequence in the final minute.

Spring-Ford looked poised to run out the clock, but a crease violation gave the ball back to the Vikings with 44 seconds to play. After a timeout, PV attacked down the left alley, but Marchini closed the door, stripping the ball and carrying to daylight.

A Rams timeout preceded Justin Wixted (goal, two assists) slamming the door with a final tally with one second remaining. It was the 100th goal of Wixted’s career.

“This isn’t our best effort – mentally, we weren’t where we needed to be,” said Perkiomen Valley coach Bryan Churchey. “We have a checklist of things we want to achieve, and looking back here, at the end of the game, we did not hit enough of those tonight.

“But it’s execution. We know what they want to do, and we let them do too much of it tonight.”

It won’t be until next week at Perkiomen Valley that the question of the PAC’s best for 2022 will receive its ultimate answer. Owen J. Roberts and Methacton will join the Rams and Vikings in the Final Four, with Tuesday’s semifinals determining who advances to play for the championship in one week’s time.

A rematch of Thursday night’s contest looks like a distinct possibility.

The first half belonged to the defenses, who took turns forcing the respective offenses into short, unproductive possessions. With both teams in double digits for first-half turnovers, the early difference was Vanella’s eight saves.

Spring-Ford opened the scoring on the back of a Bogdan goal just two minutes into the contest, but more than a full quarter passed before Will Bonowitz doubled that lead off a feed from Wixted seven minutes before halftime.

After halftime, PV’s Dane Hagen (who registered his 100th career point in the Vikings’ Wednesday win over Upper Merion) got the Vikings on the board with an impressive individual effort dodging from behind the goal, and Aidan McCabe knotted the affair at 2 of a Harry Schlachta feed five minutes later.

But Will Fish and Marchini quickly re-opened SF’s advantage to two by the early fourth quarter, and the Rams held on despite a late rally keyed by PV’s Ethan Schauer.

For victorious Spring-Ford (12-4, 9-0 PAC), the top seed awaits in next week’s tournament, while the Vikings (14-3, 7-2 PAC) finish in a three-way tie for second place with OJR and Methacton.

Spring-Ford will play the 5 p.m. opener against the team that loses the tiebreaker among the three second-place finishers, while the remaining two schools will play at 7 p.m. at Perkiomen Valley.

Last season, with no PAC Final Four tournament, the Vikings rode the momentum of an early-season win over the Rams to the program’s first PAC lacrosse title, snapping Spring-Ford’s eight-year championship run in the process. After taking the first step Thursday night, the Rams will look to end Perk Valley’s hopes of a similar run next week.

Perk Valley will enjoy the physical home-field advantage in the Final Four, but that’s of little consequence in Marchini and Spring-Ford’s opinion.
“We play our game, whether we’re at home, away – we focus on what we can control,” he said.

“Obviously, we want to score more than five goals – but when our defense is able to limit teams like tonight, it takes away some of the pressure on the offense.”

Both teams are well-positioned for potential first-round byes in the District 1 Class 3A tournament (starting May 17). Perkiomen Valley will fall slightly from their No. 3 position after the loss, but figure to stay comfortably in one of the top eight spots needed for a first-round bye (and second-round home game).

Spring-Ford came into Thursday night ranked No. 7 in District 1 and could move as high as No. 5 with Thursday’s victory.