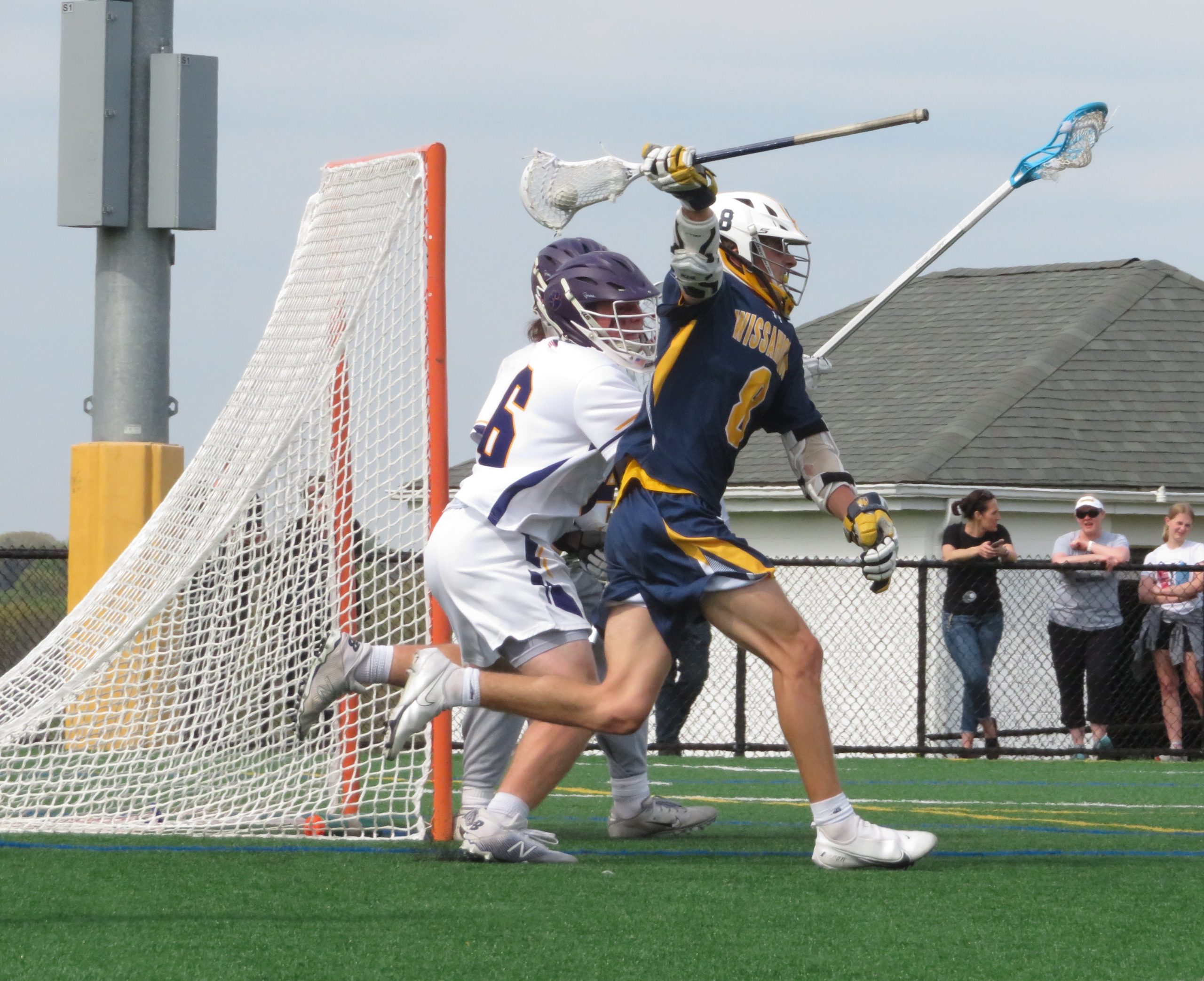 Wissahickon's Andrew Slackman moves in front of the net against Upper Moreland on Tuesday, May 3, 2022. (Ed Morlock/MediaNews Group)

UPPER MORELAND >> In recent years, the Wissahickon-Upper Dublin game has gone a long way in determining the Suburban One League American Conference championship.

The Trojans and the Cardinals are both undefeated through six league games with four to go. They face each other Friday at 5 p.m. at Wissahickon High School.

The Trojans (9-4, 6-0 SOL American) scored 18 goals through three quarters before resting some of their starters. They built an 8-2 lead in the first quarter, 13-2 at halftime and 18-2 at the end of the third.

“I’m really excited (for Upper Dublin). Big, cross-town rival. We’re expecting a lot of show-outs. It should be a good game.”

Slackman led the Trojans with seven goals. He had a hat trick in the first quarter, two in the second and two in the third. His back-to-back goals in the third quarter were both setup by classmate Kyle Lehman. Both passes went through defenders to find Slackman in front – the first a fancy underhand helper while the second was more traditional.

“My teammates were keeping their heads up, especially Kyle.” Slackman, who added two assists in the win, said. “He was looking across the field for me. We were getting a good feel for the defense and they were finding open spots.

“Over the summer (Kyle and I) always worked on keeping our heads up. We’ve done that exact pass (from the third quarter) multiple times. It was just converting that from practice to games.”

Lehman finished the game with six assists to go along with two goals. Sam Baker had three goals while Nick Donofrio scored twice. Gavin Myers and Jimmy Malott each scored once.

Wissahickon also got a boost from the return of Dean Wolfe. Wolfe, a senior who’s been dealing with an ankle injury, played in his second game of the season and first in a month. He scored the team’s first goal and finished with a hat trick.

“We bang the ball around the horn,” Wolfe said. “Everyone can score, I think everyone scored today. When everyone is shooting the ball well and they’re falling, no one can stop us.”

“It’s awesome,” Slackman said of having Wolfe back. “Dean’s always a big player on our team. He came back and had three goals. It was really big seeing him come out here and play well.”

Wolfe suffered a lateral ankle sprain during the preseason and missed a couple of weeks. After scoring three goals in an 8-3 win over Perk Valley on April 1, an MRI revealed a high ankle sprain and he’d have to miss an extended period of time.

“We’re finally on the tail end,” Wolfe said of the injury’s timeline. “I’m just happy to be back and getting back into the swing of things. We’ll see how it goes.”

Wolfe played in the midfield Tuesday but hopes to be back on attack Friday against Upper Dublin.

“Very big game,” Wolfe said. “I’ve been telling them it’s the biggest game of my life. That rivalry, all season, it’s been the one on the calendar. I’m looking forward to it.”

Ryan Olexa led Upper Moreland (8-5, 4-2 SOL American) with three goals. He gave the Golden Bears a 1-0 lead 1:14 into the game and again in the final minute of the first quarter to make it 8-2. He added his third in the fourth quarter.

Alex Emmell also scored for Upper Moreland in the fourth.