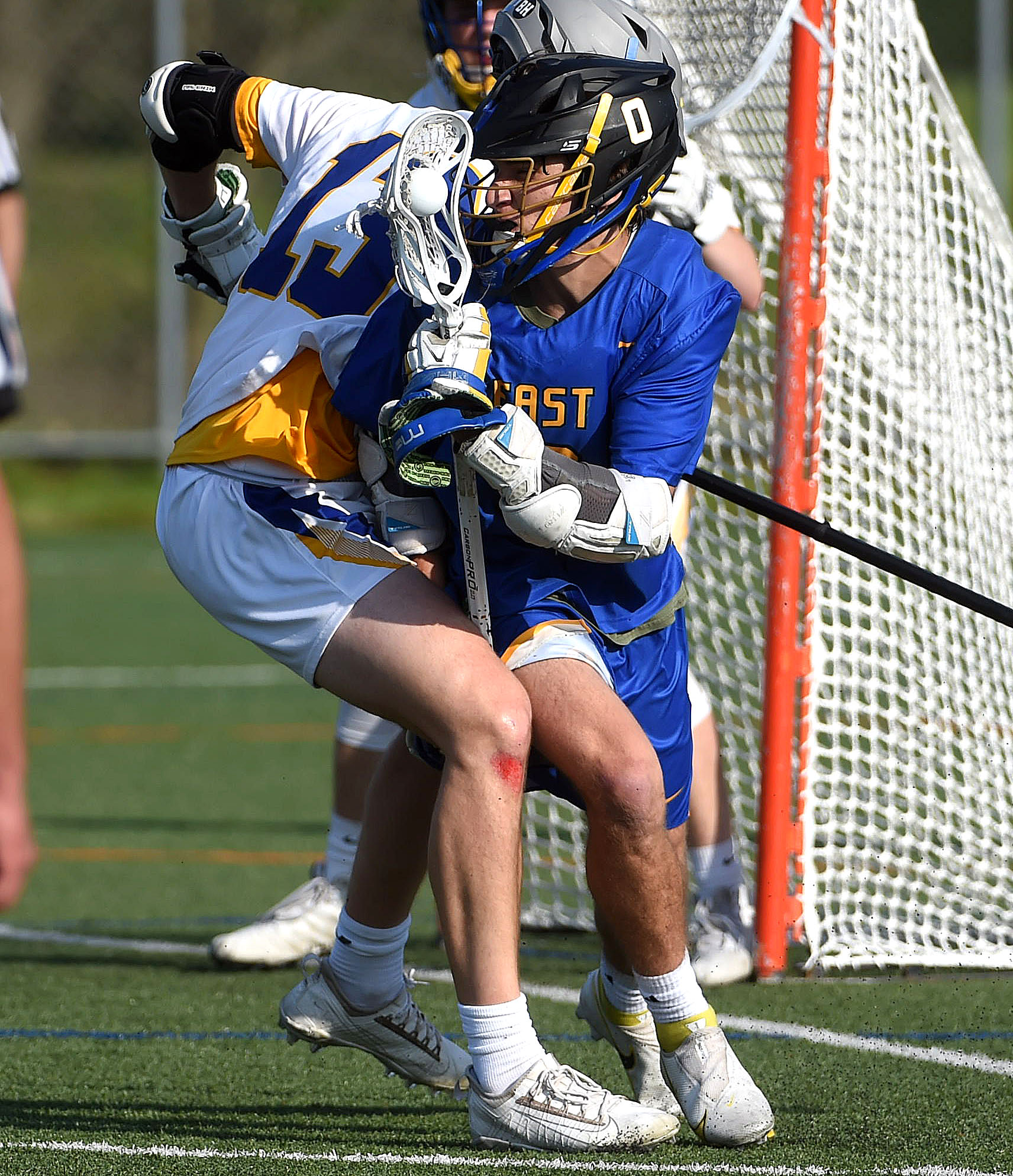 DOWNINGTOWN >> Despite a combined total of just five goals scored through the first 32-plus minutes of boys’ lacrosse action, it would be inaccurate to say that the offenses struggled during Tuesday’s Ches-Mont showdown between Downingtown East and Downingtown West.

“We talked the most about defense and possessing the ball before this one,” said Cougars’ head coach Joe Horvath. “If you look at (a match) between two quality teams, particularly in District 1, you won’t see a whole lot of goals, because of stingy defenses followed by possession-based offense.”

In front of a large and boisterous crowd at DeSerafino Stadium, Downingtown East employed a lot of both on its way to a satisfying 5-2 triumph over the Whippets. The Cougars have now won nine in a row and move into sole possession of first place in the league at 10-0 (14-1 overall) with two regular season outings to go.

“This is insane – it’s a really good feeling,” said junior midfielder Bo Horvath, the coach’s son. “We knew it was going to be a battle, and we got it done.

“But the season is not even close to being done. We still have a lot of work to do, and we are just going to keep grinding.”

Yes, East is in the Ches-Mont driver’s seat, as well as remaining near the top of the District 1 3A Power Rankings. But the Cougars still play defending champion Kennett and wrap things up at Unionville.

“I just talked to the guys that it was a great win but they aren’t out of the woods,” Joe Horvath pointed out. “Both of the teams we still have to play in our league – Kennett and Unionville – beat us last season.”

Downingtown West falls to 8-1 (13-2 overall) and must also face Kennett and Unionville. But even if East stumbles once the rest of the way, they would claim the league crown due to owning the tiebreaker against the Whippets should they win out. Kennett had a mathematical chance to defend its title until an 8-7 loss to West Chester Rustin on Tuesday dropped its record to 8-2.

“The better team won. That is all I am going to say,” said West head coach Billy Davis.

“This stinks,” added Whippets’ senior standout Michael Straub. “We wanted to win this game, but in the end, I’d rather lose this game and make a run in the postseason.”

Committed to play college lacrosse at Delaware, Straub won seven of 10 face offs on Tuesday against N.J. Cogliati. But the East senior prevailed on 3 of 6 in the first half, and that helped the Cougars score the first two goals of the game. They went on to maintain the lead the rest of the way.

“The thing about N.J. is that even he loses a face off, he makes it a battle,” Joe Horvath said.

“I think (East) had a game plan to slow it down, play mostly in our (defensive) end and tire our defense out,” Straub added.

And it worked. Senior Alystair Hemburger ended a lengthy opening possession with a goal. And then six minutes later, junior Bryson Kolinsky made it 2-0 following another long possession.

“One of our main goals is to get ahead early,” Bo Horvath acknowledged.

Junior Eddie Moore got West on the board in the final minute of the first quarter, but Kolinsky scored again midway through the second period to give the Cougars a two-goal cushion at the half.

The lone goal in the third was Moore’s second of the day, on an assist from Straub, to make it 3-2. And it stayed that way until Bo Horvath scored with 1:43 to go, followed 43 seconds later with a goal by teammate Jake McMahon.

But in the aftermath of the ensuing celebration, two East players were whistled for unsportsmanlike conduct. And then soon after that a third player was assessed an unnecessary roughing penalty, which meant that for the final 38.7 seconds, the Whippets had a three-man advantage.

Thanks to solid play in goal by East freshman Brady Quinn, and the rest of the Cougars’ stout defense, West did not score again. But the sequence did not please Joe Horvath.

“It was really unfortunate to end the game that way,” he said. “It made it exciting, but our lack of discipline leads to situations like that, so we have to get that corrected or we are going to lose a game because of something like that.”

Quinn was a revelation for East. He only played in the second half – the first half goaltender was sophomore Evan Milon – but turned aside 11 shots on goal in the final 24 minutes.

“We have a very mean defense, and they don’t like to give up any goals,” Bo Horvath explained.

“Brady (Quinn) looked great, and so did our whole defense,” Joe Horvath added. “We talked about trying some new (defensive) techniques, but at the end of the day we told them to just play tough hard-nosed, fundamental defense like we’ve been playing all season, and they did that.”

Ironically, the Whippets had a 17-13 shots on goal advantage, but still only managed one goal in each half.

“I am very proud of our guys and the coaching staff,” Joe Horvath said. “And I am appreciative for all of the Downingtown East support. It was just a great day for us.”

And even though West did not win the game, Straub marveled after it was over about the atmosphere of the latest clash in the ‘Battle of the Brandywine.’

“Playing in a game like this is what you dream about as a little kid,” he said.