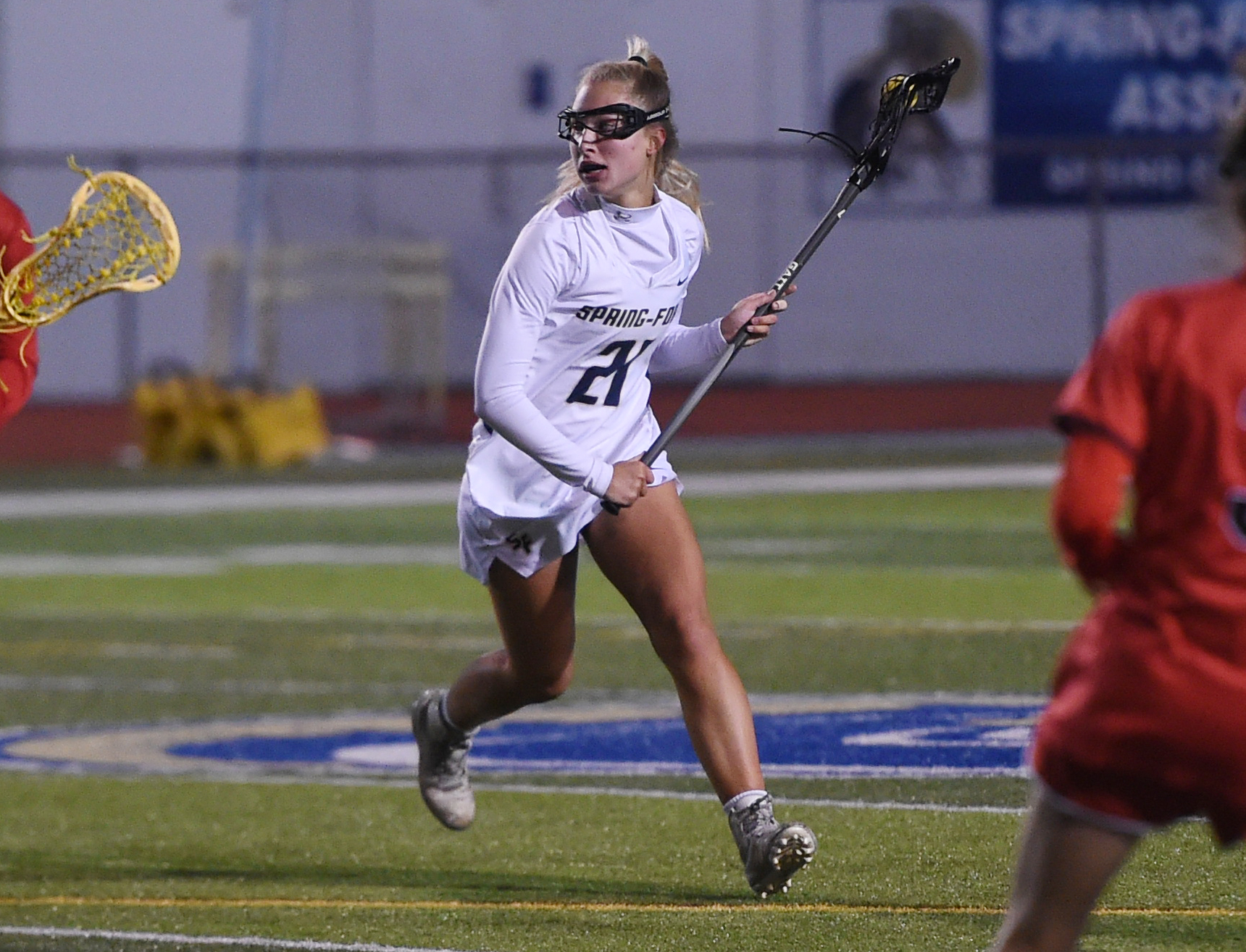 Meghan didn’t miss the game though. Instead, she was on the sidelines coaching as an assistant for the Spring-Ford girls lacrosse team — taking in the moment from up close rather than in the stands on a phone screen.

Alyssa Mozi, a senior committed to Boston University, tallied her 100th career goal Saturday against Wilson and gave her mother — and coach — a moment neither will soon forget.

“First of all, it was absolutely amazing to be standing on the sidelines there when it happened,” Meghan said. “Normally in any other year prior to coaching the team, I would have been up in the stands. To be right there –and we had a game ball ready to go – that was amazing. She works really hard, so she deserves it and I was so happy to be there to see it.”

It’s a high standard when it comes to the Mozi family and Spring-Ford lacrosse.

The former Meghan Vernon was a standout herself at Spring-Ford, leading the Rams to their most recent league title in 1991. She played in college at Bloomsburg where she was an All-American as a senior and inducted as a member of the Huskies’ Athletics Hall of Fame in 2012.

“She’s taught me so much,” Alyssa said. “Especially having her on the sidelines with me this year, it definitely motivates me a lot more because I know she holds me to a really high standard. It makes me play so much better.”

Spring-Ford senior Alyssa Mozi, second from right, is pictured with, from left, sister Hailey, mom Meghan and dad Patrick upon signing for Boston University. It’s been a family affair on the Spring-Ford girls lacrosse sidelines this spring with Alyssa and Hailey on the roster while Meghan has joined the Rams as an assistant coach.

Meghan Mozi noted Alyssa possesses strengths on defense that she didn’t have as a player and noted Alyssa’s unselfishness is a trait that distinguishes her as a lacrosse player.

Even if it hasn’t always gone to plan, Alyssa Mozi has put together the final touches on an impressive final two seasons of her high school career.

After scoring four goals as a freshman and having her sophomore season canceled, Alyssa scored 42 goals in 2021 and earned All-Pioneer Athletic Conference Liberty Division first team honors. She’s been one of the league’s top offensive threats in 2022, scoring game-winners against Boyertown and Perkiomen Valley earlier this season.

“I know this is a personal goal, but I also wanted this for the team,” Alyssa said. “I think it gave our team a lot of confidence and boosted morale.”

Meghan Mozi coached Alyssa and younger sister Hailey in recreational youth lacrosse up until they reached middle school. When her daughters started getting more serious with club and school lacrosse, Meghan went from coaching on the sidelines to watching from the stands. She said her advice and instructions — for the most part — were reserved for when they got home from games, sometimes diagramming things on napkins on the kitchen table.

“She definitely has made me a better player and she knows a lot about the game,” Alyssa said of her mother’s lacrosse background. “I think we’ve learned over the years ways to be better and play better, so I think it helps that we have common knowledge to help each other better coach and better play.”

With Hailey joining Alyssa at the high school level this season, the stars aligned for Meghan, who teaches special education at Spring-Ford Middle School, to join the Rams’ coaching staff under head coach Kristi Holstein and coach her daughters from the sidelines again.

“I had something to contribute,” Meghan said of why she returned to coaching. “I’ve obviously been around the game for quite a long time, so it’s not like I don’t know the sports or the players themselves; most of the kids on this team I coached in youth lacrosse. … It was an easy transition and I kind of just threw myself into it.”

Spring-Ford (6-9) has three remaining games scheduled for its 2022 season, meaning the end is near for Alyssa’s time left with the program.

Prior to this season, Alyssa and Hailey were excited to share the field together for the first time together since they were both in elementary school but their time was cut short when Hailey went down with an early-season injury.

While her older sister will continue her career at Boston University next season, Hailey still has three more years to leave her own mark on the school.

“I think she’s going to be very successful over these next three years, obviously when she comes back,” Alyssa said. “It’s been really fun to play with her and just have fun.”

Lacrosse has been the dominant topic around the Mozi household for quite some time. Meghan’s husband, Patrick, wasn’t a lacrosse player, but he’s been sucked into the sport now as well, often watching college lacrosse games with his daughters on a weekend afternoon.

This season was a special one for the Mozis as they got to spend one last season together on the lacrosse field.

“It’s definitely amazing,” Meghan said. “This is my favorite sport. I also played field hockey as well and chose to play lacrosse in college. They did the same thing. I don’t really think that I pushed them to play lacrosse over field hockey, it’s just something that’s developed … But it’s really great when I get to come home from work everyday and we get to talk about practice or the game. … It’s been really fun.”