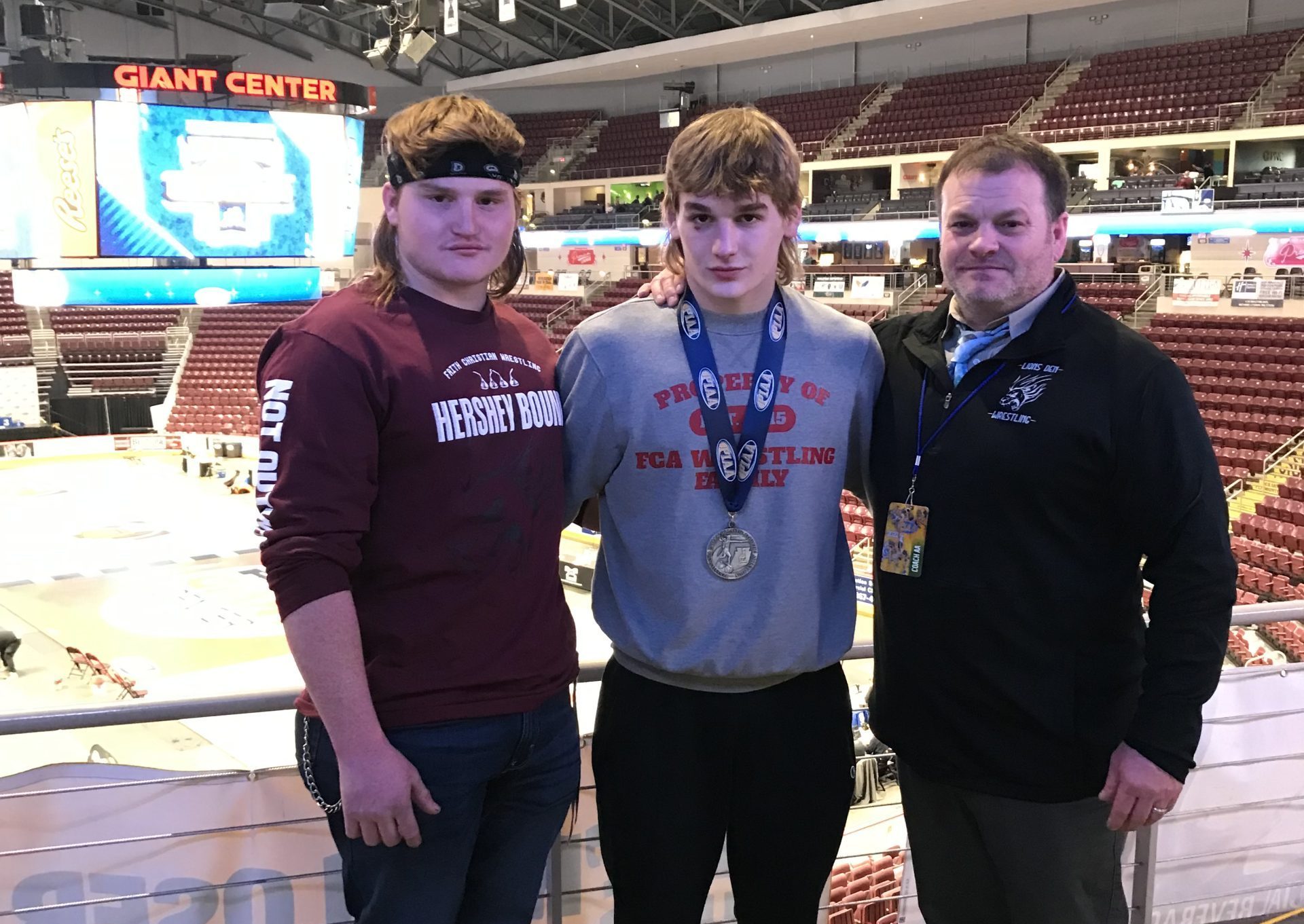 Second place still does not sit well with Eric Alderfer.

“I’m still not satisfied with second by any means,” he said. “It’s still pisses me off.”

While his drive to reach the top of the medal stand at the PIAA Class AA championships finished with Alderfer taking second at 145 pounds, the complete result was another superb season for the Faith Christian senior – one that earned him selection as The Reporter/Times Herald/Montgomery Media 2021-2022 Wrestling Athlete of the Year.

“It’s obviously wasn’t how I wanted to finish the season but I’m on bigger and better things now like going to college at Lock Haven so that’s fun,” Alderfer said. “I think I had a pretty good senior season but not everything’s going to go your way.”

Alderfer, chosen Athlete of the Year for the second consecutive season, posted a 36-9 record as a senior to cap his career at Faith Christian with a mark of 135-33.

“Kind of annoyed that I could of gotten more but I didn’t because of that weird COVID year,” Alderfer said.

He won a third straight District 1/12-2A title, a second straight South East 2A Regional championship and earned his fourth PIAA appearance, claiming medals in the last three – the silver this year joining his eighth-place finish at 120 in 2020 and his four-place finish at 138 in 2021.

“They’re used to be a big discrepancy between AA and AAA but now that you have all these good wrestlers going to smaller schools,” Alderfer said. “It’s like all of the medalists are pretty much the same caliber because it’s like look at what they’re placing at Powerade and those tournaments.”

Alderfer taking eighth as a sophomore two years ago was Faith’s first-ever PIAA medal. This year, the Lions had four top-six finishes at Hershey as they placed third in the team points standings. FCA also was third at the South East 2A Regional and won the District 1/12-2A duals title.

“It’s pretty cool to see,” Alderfer said. “There’s a decent amount of guys coming up there that have a lot of potential so that’s cool to see.”

“I wanted to improve on just my getting out of bottom and finishing my shots better,” Alderfer said. “And I definitely think I improved on them a lot. My dad played a big part in that by helping me with that.”

He won his opening two matches at December’s Powerade Tournament to reach its 145 championship quarterfinals and eventually took seventh with a 3-1 win over Williamsport’s Riley Bower.

In January, he made Escape the Rock championship quarters but ended up coming in eighth. However, the loss in the seventh-place match to Notre Dame-Green Pond’s Evan Maag ended up being his last until the 145 state final.

“It wasn’t my best tournament,” said Alderfer of Escape the Rock. “I don’t know, I think I wrestled pretty good the first day but the second day, I don’t know why but I just didn’t wrestle too good. And then it was definitely a big motivator for me because I just couldn’t of lost to some of those guys.”

A 3-0 decision over Conwell-Egan’s Hayden Mann helped Faith Christian win the District 1/12-AA Duals title with a 49-14 victory over the Eagles Feb. 5. Alderfer then won each of his three matches in the PIAA Duals tournament – a pin and two major decisions, all at 152 pounds – as the Lions reached the second round of consolations.

Alderfer earned his fourth District 1/12-AA medal and third consecutive district title Feb. 26 as he bested Mann again by a 5-1 decision in the tournament’s 145 final.

He beat Saucon Valley’s Cael Markle by 17-1 tech fall in 5:40 in the quarters then secured a 7-5 decision over Bishop McDevitt’s Jake Gilfoil in the semis. The final was a rematch Maag and Alderfer avenged his 12-8 loss at Escape the Rock by edging the Notre Dame-Green Pond senior with a 1-0 victory.

“I don’t know what was different,” Alderfer said. “Honestly, I shot more in the first one but he’s a good wrestler and he just capitalized off of my shots.”

Alderfer opened states with an 11-4 decision over Burrell’s Shawn Szymanski then beat Chestnut Ridge’s Trevor Weyandt in the quarters to advance to the semifinals for a second straight season.

“Honestly didn’t think I had a very good state tournament in general because I was just sick for the whole postseason,” Alderfer said. “But it is what it is – everything has to go your way in order to win a state title.”

After falling in the 2021 semis at 138, Alderfer was not denied a spot in the final this time, getting past Kaiden Wagner of Lewisburg with a 1-0 decision.

“It was a really big deal because I’ve been going to watch those guys wrestle at the state tournament since I was just a youth wrestler,” Alderfer said. “And I always wanted to be the guy in the big show in the finals.”

A 3-0 loss to Montgomery’s Conner Harer kept Alderfer from claiming gold but his second-place finish meant the FCA senior had improved upon his performance at each PIAA tournament – qualifying as a freshman, eighth as a sophomore then fourth as a junior.

“I would of rather had four medals but it is what it is,” Alderfer said. “Nobody really cares that you made it to the blood round your freshman year. It’s like nobody’s going to ask you that, there’s going to ask how many medals you have.”

Alderfer committed to Lock Haven in September and is looking forward to the chance to wrestle in Division I with the Bald Eagles.

“I really like the campus and the coaches are stand-up guys and they have a lot of energy and they (are) just good people and great coaches,” he said. “And Lock Haven’s on the up-and-coming, they’re getting all these good PA wrestlers coming in so that should be fun.”